Jagtial will witness enormous development in near future: Kavitha 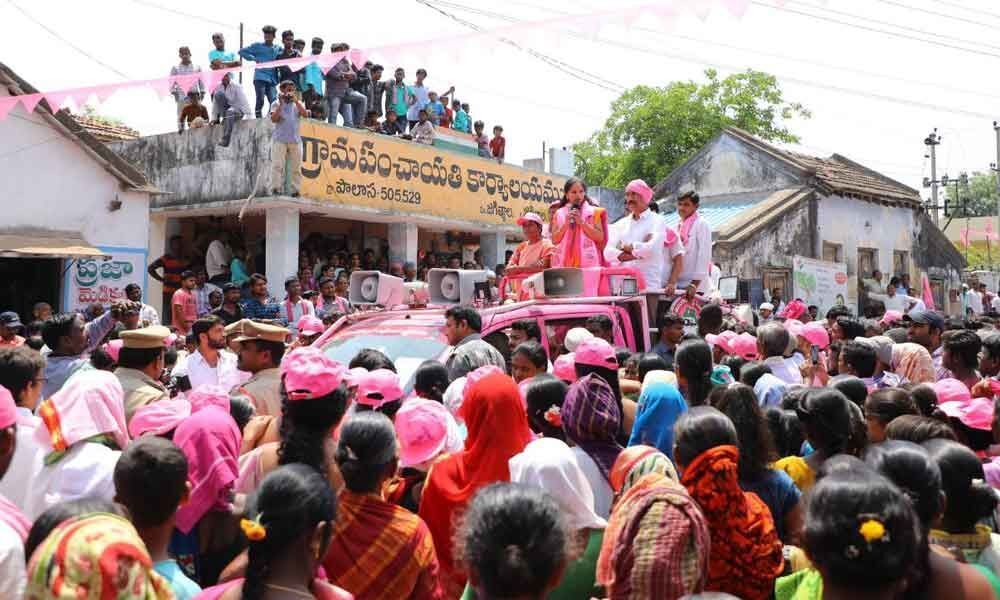 The Jagtial district will witness enormous development within a short period as several developmental activities will be taken up very soon, Nizamabad TRS MP candidate K Kavitha announced at a road show in Polasa village of Jagtial rural mandal on Wednesday.

Jagtial: The Jagtial district will witness enormous development within a short period as several

announced at a road show in Polasa village of Jagtial rural mandal on Wednesday.

Addressing the massive gathering, Kavitha said the TRS government is determined for the upliftment of weaker sections.

The government is going to sanction Rs 5 lakhs from May 1 to the people, who owns land, for constructing house.

And double bedroom house will be sanctioned to every poor family in the State in the coming two years, she added.

The TRS government has allotted Rs 2,800 crores in the budget to sanction dole to the unemployed youth and also sanctioned loans to the people dependent on caste professions (Kulavruttulu).

All the promises made by the TRS government before going to elections will be fulfilled in the coming days, she assured.

Every tank and lake located in Jagtial district will be filled with water through SRSP renovation project, which would be implemented very soon.

After the Road show, several TDP leaders including TDP district president A Sagar Rao, leaders Gangadhar, Bale Shankar, sarpanches and upa-sarpanches from various mandals in the district joined into the TRS fold in the presence of Nizamabad MP candidate Kavitha and MLA Dr Sanjay Kumar at the district party office.