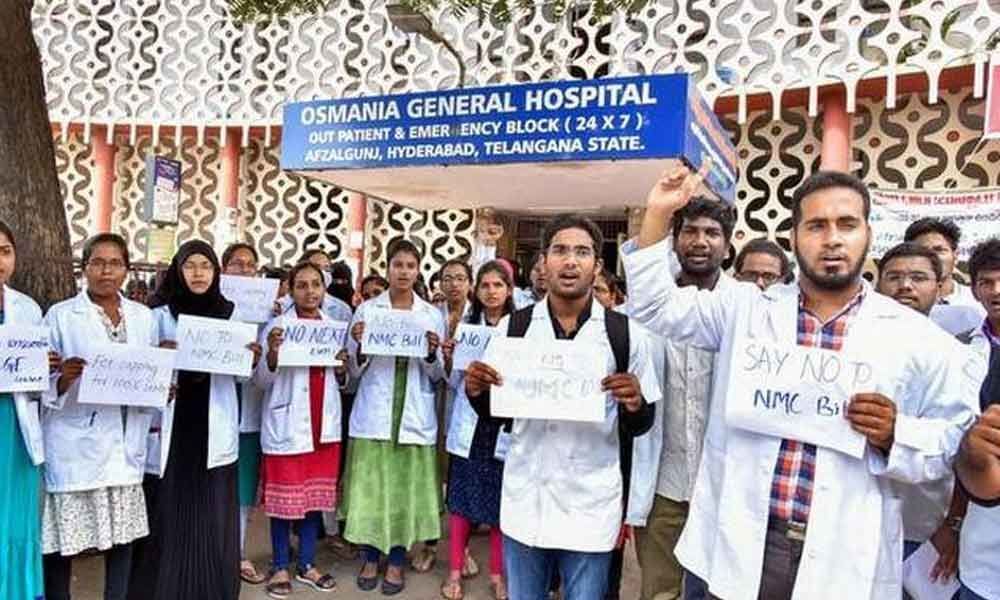 Hyderabad: Intensifying their agitation against the enactment of National Medical Commission (NMC) Bill by the Union government, junior doctors working in the government hospitals like Osmania and Gandhi Medical teaching colleges boycotted their duties on Friday and staged a sit-in.

Junior doctors abstained from their duties, including emergency services, and staged a sit-in on the college premises.

They alleged that Centre brought in the NMC Act to replace the existing Medical Council of India (MCI) with the NMC and given the commission arbitrary powers.

They pointed out that the new Act would empower Central government to override any suggestion by the Commission.

In a quick move to avoid the trouble arisen as the junior doctors boycotted duties, the hospital authorities swung into action and instructed all the doctors and teaching staff to attend their duties without fail.

All the staff were asked to make available themselves in the hospital to extend emergency services in next 24 hours.

Meanwhile, Health Minister Etala Rajender appealed to the protesting doctors to resume duties keeping in view of the increasing number of patients to the hospitals due to seasonal health ailments.

The Minister urged the striking doctors and medical professionals to withdraw their protest.

The government was ready to address the issues raised by them and the doctors should resume their duties forthwith, he said.

He also said the issues of the doctors and medical professionals would be taken to the notice of Chief Minister K Chandrashekar Rao to resolve them.

The doctors must get back to duties and serve the patients as their primary responsibility.