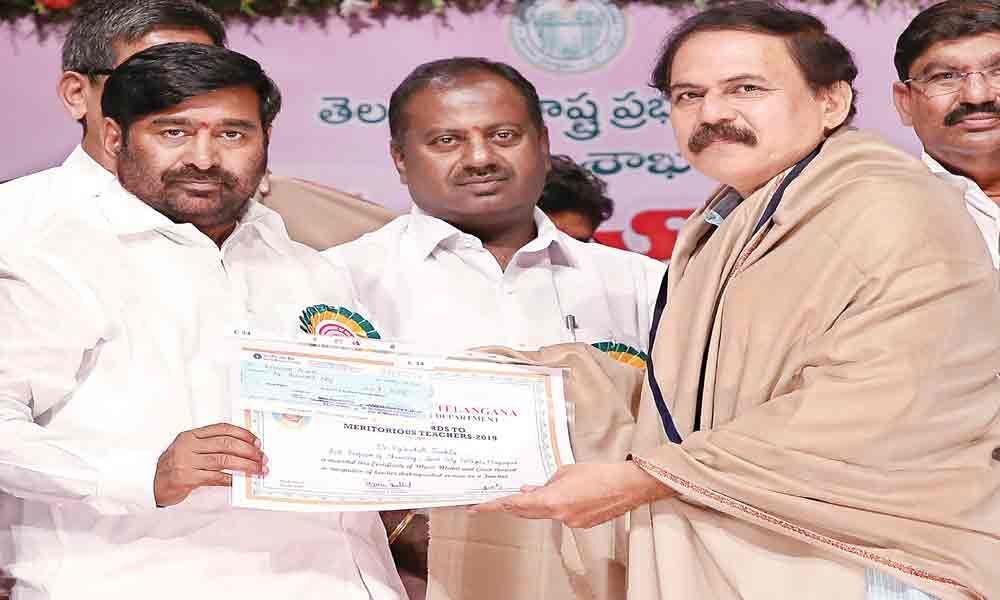 It was a double bonanza for Huzurabad, where barely any person would not the Shuklas from as far back as 1967.

Huzurabad (Karimnagar): It was a double bonanza for Huzurabad, where barely any person would not the Shuklas from as far back as 1967. The two siblings - Ravi Shankar and Viplav Dutt – of Shiv Prakash-Satyabala Shukla made Huzurabad town proud on Thursday when the duo received Best Teacher Awards – one District and the other State-level.

Incidentally, the siblings' parents Shiv Prakash Shukla and Satyabala Shukla, who are no more, were also teachers worked better part of their service in Huzurabad and surroundings.

Although Shuklas belong to Uttar Pradesh, their grandfather Amrutlal Shukla – settled in Telangana region. Amrutlal was first MLA who represented Sircilla Assembly in the first elections held in independent India in 1952. Amrutlal had also fought against the despotic rule of Nizam along with Baddam Yella Reddy, a renowned Communist leader. Shuklas made Huzurabad their home since 1967.

Presently, while Ravi Shankar has been working as the GViplav Dutt Shuklaazetted Headmaster in the Zilla Parishad High School at Singapur, Viplav Dutt is the Vice-Principal of the prestigious Government City College, Nayapool, Hyderabad, and Head of the Chemistry Department.

Both the brothers who have been carrying the legacy of their parents are proactive in academic and extracurricular activities. Incidentally, both the siblings are poets and have authored several books.

Speaking to The Hans India, T-JAC Huzurabad Chairman Avunuri Sammaiah and former Telugu Desam leader Adepu Prakash said, "the service rendered by the Shuklas to education has always been remembered. It is something special that both the brothers bring accolades to their native town in the same year."

Dedicating the awards to their parents, Ravi Shankar and Viplav Dutt said, "the love and affection showered by the people will never be reciprocated." The duo thanked their colleagues for their support right through their career.