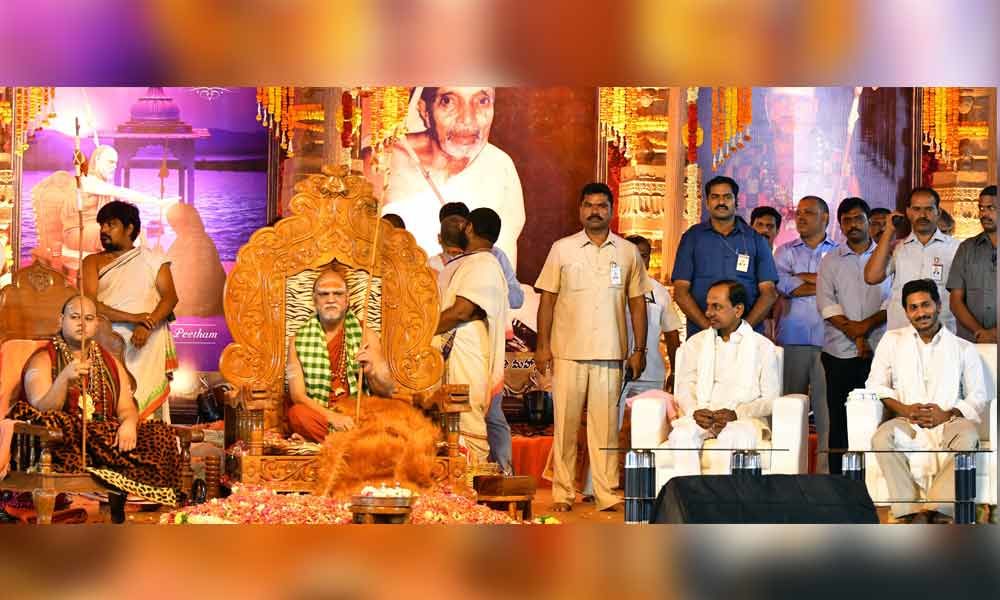 Kiran Kumar Sarma chosen as the new pontiff of the Sarada Peetham had taken Sanyas Deeksha on Sunday.

He had travelled across the country, performed tapasya in the Himalayas, the senior Swamy said.

Addressing the gathering, Swaroopananda said that Sarada Peetham could visualise the changing times in the two Telugu states and had predicted that K Chandrashekar Rao in Telangana and Y S Jagan Mohan Reddy would become Chief Ministers.

He said he had even performed Rajasyamala Yagam for their success in the elections. He also appreciated KCR for his devotion towards Hindu culture and the way he performs various Yagams. He later hugged KCR and blessed him. Swaroopananda Swamy also felicitated Jagan with a shawl and blessed him.

Swaroopananda Swamy prayed for the well-being of the people of Andhra Pradesh and hoped temples will be developed in the state under the regime of Y S Jagan Mohan Reddy.

Swamy said the Sarada Peetham would conduct prayers so that KCR and Jagan would continue as Chief Ministers for 15 years and will serve the people. He said that after him the new pontiff would take on the responsibility of praying for the KCR and Jagan.