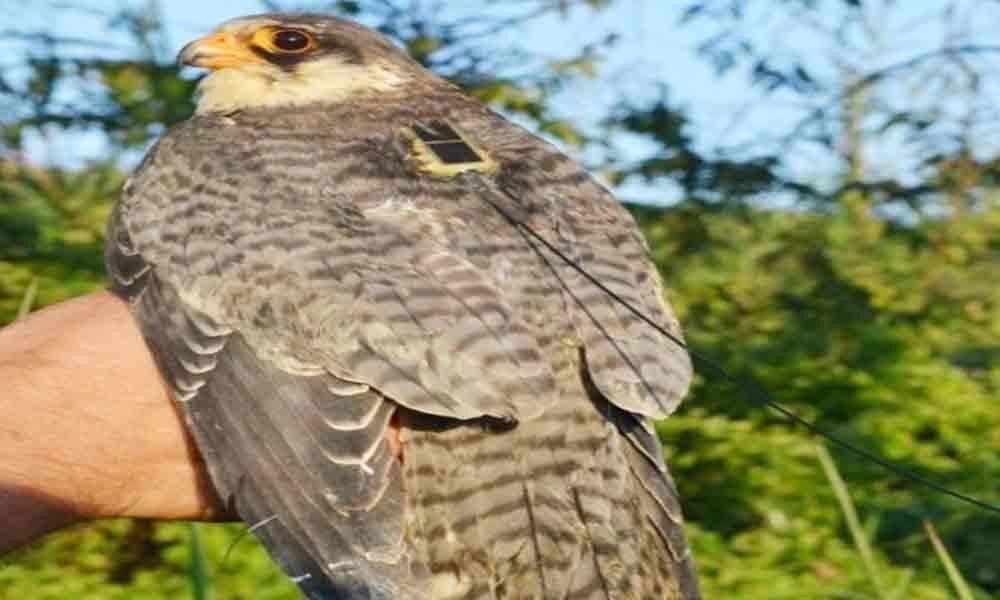 The arrival of an Amur falcon in the northeast as it heads back from Africa to its breeding grounds in northern China and Mongolia has cheered...

The arrival of an Amur falcon in the northeast as it heads back from Africa to its breeding grounds in northern China and Mongolia has cheered conservationists and other animal-lovers in the region.

Hundreds of people in India's northeastern states, particularly in Nagaland, have rejoiced to hear the news of 'Longleng', one of the satellite-tagged long distance migratory birds entering the region and are anxiously waiting for it to reach its roosting site in Nagaland.

Dehradun-based Wildlife Institute of India's senior scientist Suresh Kumar on Monday said that Longleng had reached a remote location of Manipur on Sunday evening. "Female Amur falcon, Longleng, was satellite-tagged in October 2016 from the roost site in Yaongyimchen Community Reserve in Longleng district of Nagaland and it is the is the only falcon that is currently being tracked.

"Longleng started on its migration from Somalia to India on April 29. Upon leaving the African continent, it made a four-day, non-stop flight over the Arabian Sea, skirting the coastline of the Arabian peninsula and then flew along the coast of Gujarat and enter India over Surat town," Suresh Kumar said.

On May 2, Longleng made its first stop in a forested tract in the Gadchiroli Forest Reserve in eastern Maharashtra, after covering a distance of close to 4,800 km. During the two years of tracking since 2016 on its return from Africa, Longleng, entering the Maharashtra coastline, would fly down to southern Karnataka close to Bengaluru or Mysuryu and after a stop-over of a few days, head back along the east coast to northeast India and then beyond.

"However, this year, Longleng interestingly headed straight across Maharashtra and almost straight in the direction of cyclone Fani that was moving up along the Bay of Bengal coast. Being a terrestrial bird, the open sea crossing poses a challenge and as a result, Amur falcons make non-stop flights of three to five days or maybe more.

Longleng's arrival in India now marks its sixth successful crossing of the Arabian Sea and it is expected to arrive in the next few days in Nagaland once again," he said. Nuklu Phom, a conservation activist of Yaongyimchen village, said: "The arrival of Longleng and other migratory birds in this part of the country is a much waited event every year. It is one of the most successful conservation success stories of the world.

"Till 2012, there have been reports of hunting of birds. But from 2013, not a single bird was killed due to the conservation effort made by the entire citizens of Yaongyimchen village in Longleng district."

The Nagaland government, particularly its Forest Department's Wildlife Wing, has been undertaking several measures to create awareness among Naga people to ensure a safe passage to falcons as they pass through the state.