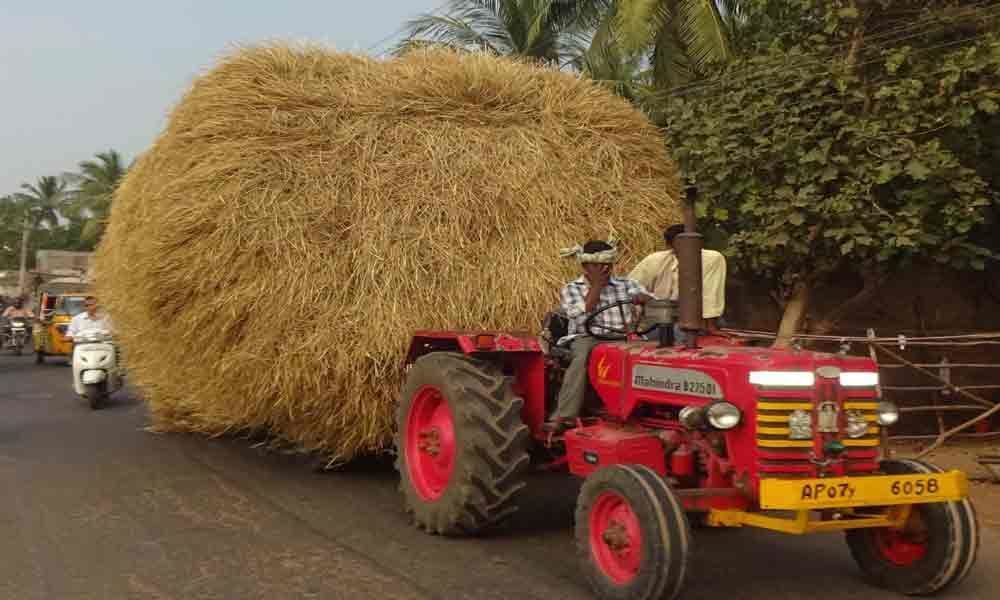 It is true that after mechanisation of farming, there was shortage for hay which is used as fodder for cattle.

It is true that after mechanisation of farming, there was shortage for hay which is used as fodder for cattle. The paddy cutting takes place in such a manner that the hay lost its shape.

The compressed hay is not liked by the cattle. This very reason is compelling many cattle growers to buy hay by paying high prices. The demand for hay increased abnormally. A tractor load of hay now costs between Rs 10,000 and Rs 15,000.

The crisis for hay can be witnessed in Bhimavaram where the paddy cultivation decreased drastically in proportionate to aquaculture. The cultivated area came down from 48,000 acres a decade ago to 30,000 acres in the constituency now. Apart from fall in cultivated area of paddy, wide use of mechanical implements has made hay more costly.

The crop cutting machines chops hay into pieces and there remains no hay straw. On the other hand, the hay gets crushed in the process of cutting the crop. The cattle would like to eat fodder which is not compressed. In order to get the hay in its original form, the farmers were getting orders to cut their crop by employing workers instead of using machines.

This kind of situation prevailed because of shortage for hay everywhere. Cattle owners in Krishna district have been facing the problem seriously as there was no second crop there. They have been placing orders by paying advances to get hay liked by their cattle.