Mayawati sees Pawan Kalyan as next CM of AP 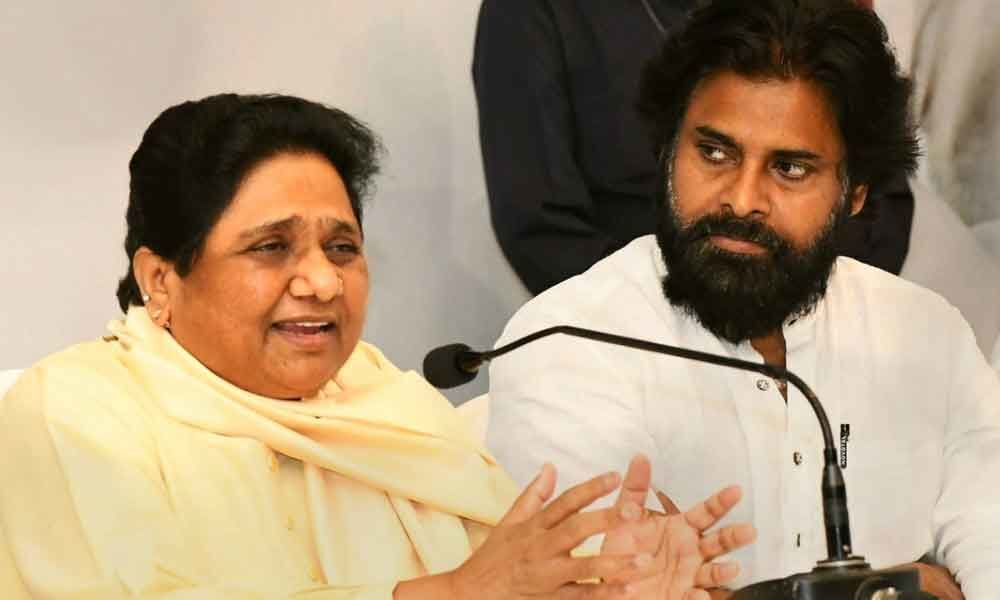 When a 'chaiwala' can become the prime minister, why not "behenji who stands for the downtrodden become a leader of the nation?" he asked. Mayawati who is here on a two-day campaign for her alliance partner Pawan Kalyan told media that the BSP backs AP's demand for the special category status.

She assured that it will become a reality if the BSP comes to power. The Congress did injustice by bifurcating the state, while the BJP made tall promises and failed to implement them during the last five years, she said.

Asked if she is in race for the post of prime minister, she ducked a reply saying that it would depend on the poll outcome and desire of the people. But added that she would replicate the UP model of development if given an opportunity.

Explaining why the BSP did not announce its manifesto, Mayawati said the BSP believes in making its action speak and that is the very reason why the party did not have a manifesto.Exuding confidence that the BSP, JSP, CPI and CPI (M) alliance would form the next government in Andhra Pradesh which would be led by Pawan Kalyan, who she said, is a young leader with commitment to serve the weaker sections.

Stitching a strong alliance with the JSP, CPI and CPI (M), Mayawati said the BSP is making its presence felt strongly across the state. "With the BSP at the Centre and Pawan as a leader of Andhra Pradesh, good governance would be ensured if both the parties emerge victorious in 2019 elections," the BSP supremo emphasised, indicating that she would follow similar pattern of governance as she did as chief minister of Uttar Pradesh.

She said, "People have seen the manifestos of the Congress and the BJP in the past. We have been hearing slogans such as 'garibi hatao' since decades. But has it ever become a reality?" the BSP supremo questioned.

Jana Sena chief said Mayawati is not a 'behenji' for him but 'mother'. Lauding her greatness, he said, she had not come from an influential family like Indira Gandhi but from a poor family. "In contrast to our state, where law and order went for a toss, Mayawati acted tough against anti-social elements. She did not hesitate to make her own party MLAs stand on the road with handcuffs when they committed offences," Pawan said.