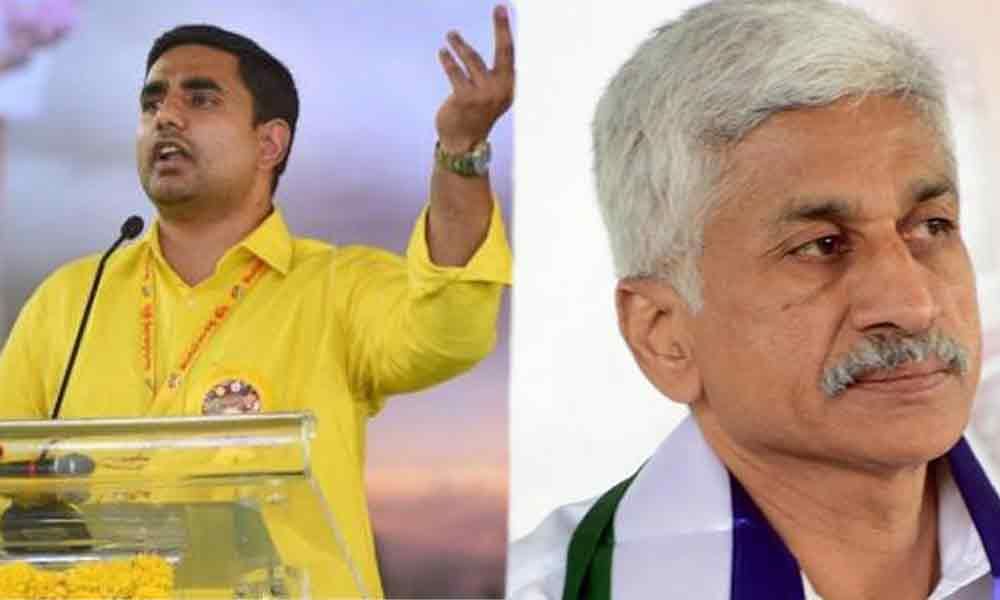 Amaravati: AP Chief Minister YS Jagan Mohan Reddy has formed a Cabinet sub-committee to investigate the corruption happened during the earlier TDP government. After investigating over 30 issues, the sub-committee will be submitting a report to the government very soon.

Ever since the committee has been formed, a Twitter war is going on between the YSRCP MP V Vijayasai Reddy and TDP former minister Nara Lokesh.

Recently in a series of Twitter messages, Lokesh has made tweets aginst CM YS Jagan and MP Vijayasai Reddy that A1 has formed the committee over the corruption and A2 Vijayasai Reddy will be investigating the issue. This is Kalikalam because corruption kings are speaking about honesty.

In the YSR regime, a unit of solar power was bought for Rs 14 and during the TDP government, the power was purchased for Rs 2.70 per unit. With the act of your father, DISCOMS has faced Rs 8,000 crore loss.

Over saying we have no information on the irregularity, without any investigation done and without the evidence they have confirmed Rs 2,636 crore corruption. By the time TDP came into power, the state was in the deficit of 22 million units of electricity. In the last five years, the deficit electricity was turned into surplus and as an achievement, the TDP government has received 150 plus awards for the performance.

We made AP as a model in power production in the country. In the last five years, Rs 63,000 crores of investment and over 13,000 people got the employment.

Have you forgotten the letter of the Secretary of the Ministry of Energy, Anand Kumar who wrote to you that not to bring a bad name to the state by stopping the investments in the name of corruption in electricity purchases.

Your attempts to making the corruption charges against our leader Chandrababu Naidu who has grown on the foundation of righteousness and honesty will be failed. Lokesh tweets.