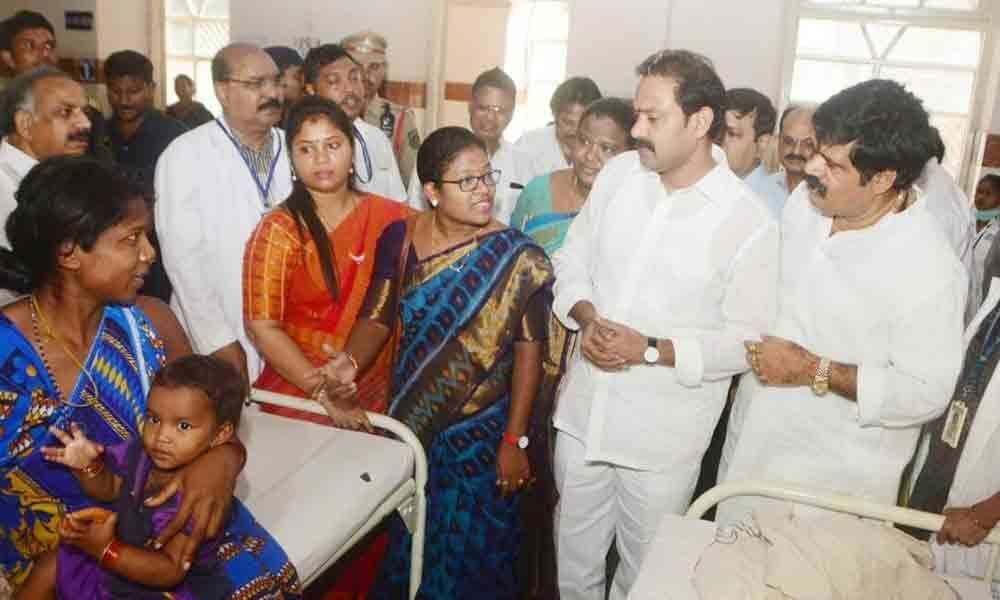 The YSRCP government is keen on streamlining the entire healthcare system and making the State as ‘Arogyaandhra Pradesh’, according to Health Minister Alla Kali Krishna Srinivas (Nani).

Visakhapatnam: The YSRCP government is keen on streamlining the entire healthcare system and making the State as 'Arogyaandhra Pradesh', according to Health Minister Alla Kali Krishna Srinivas (Nani).

The state allocated lion's share of funds for creation of medical and health facilities, Nani added. Stating that several issues were brought to his notice during his tour, the Minister said the officials should address them without any delay.

Visiting Visakha Institute Medical Sciences (VIMS), the Minister said that Rs 100 crore would be allocated to improve the infrastructure facilities in the hospital and enhance the salary of staff. Further, he added that efforts would be made to recruit regular employees for VIMS.

Stating that the government was paying more attention to the health of tribals, he underlined the need for a special cell to attend on the patients coming from the agency areas. The Minister sought proposals from the officials for additional beds in the government hospitals.

About repairs to buildings and equipment in hospitals, Nani directed the staff to get them done immediately. Deputy Chief Minister Pushpa Sreevani said more focus should be laid on the health of tribal people. Three vehicles would be sanctioned for ITDAs soon, she added.

Tourism Minister M Srinivasa Rao sought higher allocation of funds for the KGH as it was catering to the needs of entire north Andhra region. He also highlighted the problems being faced by the hospital staff.

Anakapalle MP B Satyavathi said the KGH should be developed on par with other corporate hospitals to serve patients better. VMRDA Chairman Dronamraju Srinivasa Rao said efforts should be made to get funds and modern equipment for KGH from NRIs. Besides Ministers, MLAs from various assembly constituencies and officials participated in the meeting.