A hallmark of co-operation among neighbouring States 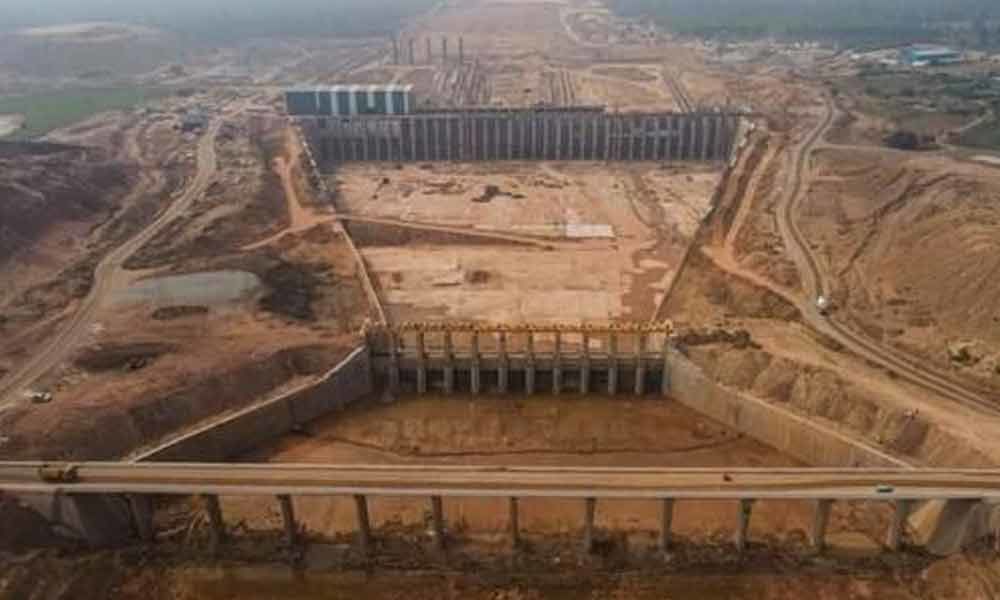 Telangana State, newly formed in 2014, had to face a similar situations.

Telangana State, newly formed in 2014, had to face a similar situations. Moving forward with an avowed target of providing assured irrigation to at least one crore acres in the State had ventured to speed up the gigantic Pranahita-Chevella Lift Irrigation Scheme.

And surprisingly, it came to know that the main source of water for the project, a barrage at Tummidihatti across Pranahita River, did not have the consent of the State of Maharashtra and hence, the barrage work could not be taken up. Pranahita river is the border for Maharashtra and Telangana States.

Pending the barrage work all other components works were started and going on with snail's pace for many reasons like Land acquisition, forest clearance, rail and road crossings etc.

The Telangana Government realised that it will be 'unfruitful' even if all those works are completed if the barrage work did not get completed.

The people of surrounding areas of the proposed barrage site in the state of Maharashtra were unwilling to allow the barrage to take place at the proposed level which would submerge their lands. Already the opinion against the barrage was solidified in their psyche.

The Chief Minister of Telangana State, KCR had tried his level best to convince the Maharashtra government on this aspect but of no avail.

Politically it is not possible for any party or leader to reverse the solidified mindset of the people and the same was the case with Maharashtra Government.

With the consistent pursuance, Telangana could obtain the acceptance of Maharashtra for the barrage at Tummidihatti, with a reduced level by four meters.

And because of the reduced level of the barrage at Tummidihatti and other considerations like availability of dependable water and storage capacities of the proposed reservoirs in the project, Telangana Government had undertaken re-engineering of the entire project.

In the course of it, a barrage, at Medigadda on Godavari River, was proposed to be constructed whose location is again on the border with Maharashtra State. Here, Telangana Government had acted proactively and adopted 'give and take' cooperative approach which would be beneficial to both the states.

Here it is apt to recollect the writings of eminent engineer ND Gulhati, "In a democratic society, it is even necessary to convince the people that the submergence, or the terms of the relevant agreement, will eventually be of benefit to them and their descendents."

And it is also relevant here to mention about the opinion of Prof. Stephen Mc Caffrey, former United Nations Law Commission member that the issues of International Water Disputes shall be resolved effectively and efficiently "before they become intractable".

The dealing of the issue by Telangana to arrive at a most important agreement in the history of interstate issues in the country is a testimony of the above opinions of the two eminent people in this field.

The engineers and top officials, Irrigation Minister and public representatives of Telangana have gone to the other side of the bank and interacted with their counterparts and even taken part in the public meetings of local people and explained the benefits they are going to accrue and the barrage construction would be a win-win situation for the people on both sides of the river.

The people on other side were clarified on the benefits like the irrigation, fisheries, recreation, tourism, ground water recharge, inland navigation etc for them.

The opposition to the barrage had come down drastically and they were so convinced about the positive impact of the barrage at Medigadda that at some places people even took out rallies in favour of the construction of the barrage.

Another important aspect of approach of Government of Telangana was that it had accepted the control levels of the barrage at Medigadda as proposed by Maharashtra.

Not showing any adamancy, Government of Telangana had agreed to the of full reservoir level of +100 m with a provision for construction for one more meter raise in the future proposed by Govt of Maharashtra.

Entire cost of the project of the project was proposed to be borne by Telangana. Govt of Telangana also agreed that Maharashtra is at liberty to use their share of water from the reservoir as allotted by GWDT.

Mahrashtra Government also responded positively and a situation of win-win for both the States was created.

The positive atmosphere so emerged had resulted in a Historic Agreement on Medigadda Barrage between both the States in 2016. Barrage at Tummidihatti at the proposed level by Maharashtra was also made part of the agreement.

Another 40 year-long pending project issue on Penganga River was also resolved with the proactive and give and take attitude of the Government of Telangana and Chanaka-Korata barrage in Adilabad district became a reality.

Consequently, the Chief Minister had laid foundation stone in May, 2016 and in the past three years with unrelenting hard work by all the concerned, with the constant surveillance by the Chief Minister, the Kaleshwaram project works progressed in an unprecedented way.

This hallmark of strong political will and pragmatic leadership, and cooperation has created a milestone in the history of federal relations of the nation.