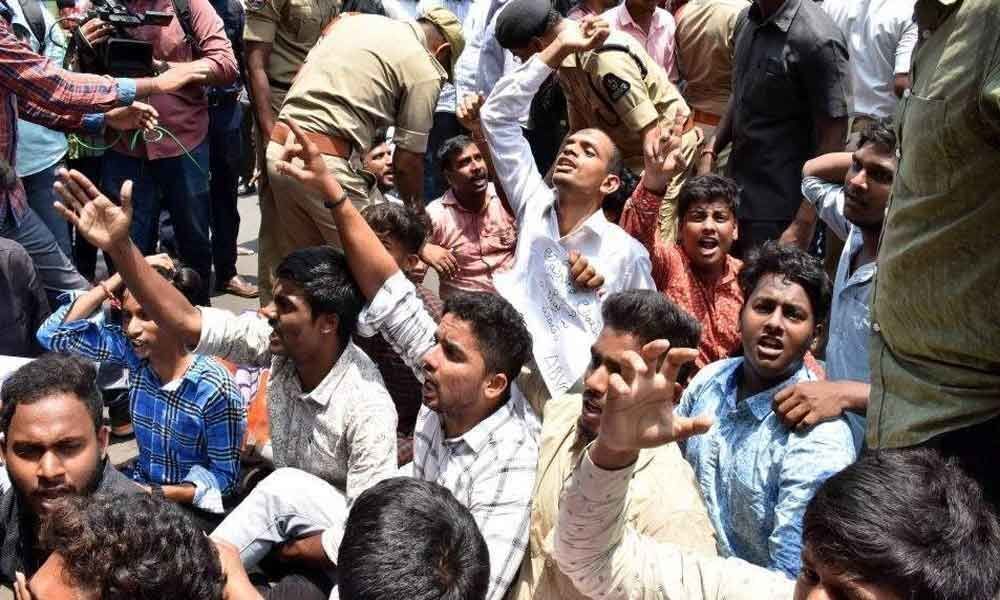 The death toll following the announcement of Intermediate results now has gone up to 24 with almost as many attempted suicides being reported from...

The death toll following the announcement of Intermediate results now has gone up to 24 with almost as many attempted suicides being reported from various parts of the State.

The government of Telangana, after initial bouts of denial, constituted a committee of three technical experts to probe into the incidents.

The experts said that both the Intermediate Board and its newly acquired technology partner Globarena were responsible for the errors in the results.

However, it did not take the board for long to put out a press release claiming that the deaths were not the result of errors.

The evaluation of most of the students who had committed suicides had no major errors, it claimed.

Part of the argument also says that the pass percentage is not unusual this year, but the politicisation is.

For the government, it is a matter of riding out this storm to go back to business-as-usual.

They have done this before. In 2016, the EAMCET paper leaked. A CID probe revealed that close to 90 people – students, parents, and printing presses in other States – were involved.

A dean of a corporate college Sri Chaitanya, and an admission agent of Narayana College were arrested after two years.

It was reported that the culprits charged Rs 35 lakh per candidate for helping them get the question papers in advance.

This is big money any way you look at it! The investigative agencies were having great difficulty filing charge sheets and prosecuting the culprits. We still do not know the fate of the probe and whether anyone will be prosecuted.

In the early years after the introduction of the common entrance exam for professional courses, students studied at regular Intermediate colleges where Physics, Chemistry, Botany and Zoology laboratories would be available.

Laboratory work formed a significant part of evaluation of students' comprehension of principles through practical examinations.

Many of the old schools and Intermediate colleges still have laboratories and regular lab sessions.

By early 1990s, fetishization of technical education began in tandem with the neo-liberal push towards privatisation of education.

Suddenly, large numbers of private coaching shops began to mushroom across the State of Andhra Pradesh, which concentrated on imparting tricks and tips of cracking the entrance examinations. Soon 100-bit multiple-choice exams were introduced.

The reverse ripple of this trend distorted the earlier emphasis of school education on language skills and conceptual learning, so much so that now even in schools, much of the evaluation is done through the multiple-choice system.

By conducting centralised exams through multiple-choice questions, making them easily computable, the concern has been merely to produce quick results without real learning outcomes.

We hear the debate year after year of engineering and other graduates being unemployable because of lack of language and analytical skills.

In 2009, 25 percent weightage was introduced for Intermediate marks as premier engineering schools like BITS Pilani and IITs began to speak up about some of the high scoring students from the coaching shops lacking any exposure to laboratory procedures which an Intermediate student ought to have.

If we close our eyes and remember all the junior colleges we see around us, it is evident that they should not be running those establishments from the second floor of a shopping complex.

Most of the chains also do not have science labs. The way they conduct lab work through "mobile and shifting labs" for one week at a time should worry the regulators.

In conventional junior colleges, the lab work follows after a topic is taught conceptually. Each week there is a regular schedule of lab sessions for all the science subjects.

This is compressed into one convenient week for all topics in coaching centres. The mobile lab moves on to the next branch. At the end of it, how the practical exams are held and marks awarded is a scandal in itself.

The government junior colleges are located in large land pieces with buildings, labs and playgrounds.

Through deliberate neglect, by not recruiting teachers, by not allocating funds for keeping the existing facilities running, successive governments have undermined the junior college system.

The State policies, and the loud publicity campaigns and physical enrolment drives taken up by the private junior colleges have shifted 82 percent of the student base from the State-run system towards the commercial system.

To keep ahead of competition, the commercial establishments have not hesitated to indulge in malpractices such the EAMCET leak in 2016, though so far it is being portrayed as the work of rogue staff.

Only not-for-profit registered societies are supposed to run educational institutions.

We have all accepted this rubric for them, therefore, tacitly accepting their right to put an unlawful price on our children's education.

The collusion of parents in this short-cut to an elusive prosperous future is the unfortunate part of the story.

The worst fallout of this hijack of science stream by corporate colleges is the lasting damage done to other streams.

The All India Survey on Higher Education report (2016-17) says that 38 percent enrol in arts, humanities and social science course.

Science courses are opted for by 16.7 percent. Engineering and technology by 14.7 percent and commerce by 14.1 percent at the undergraduate level.

The prolonged freeze on recruitment in the State sector, cut back on funding for education ensured the closure/merger of junior colleges even as the private colleges entered the scene aggressively capturing the 'market.'

Today, the crisis of the results is a consequence of this neglect of State sector. Junior colleges do not have experienced, qualified faulty in adequate numbers to evaluate the nearly ten lakh scripts.

Large numbers of ad hoc, temporary teachers and teachers from private colleges are roped in for evaluation.

A lot of information about the internal working of the system stands exposed. Parents and teachers have stepped out to protest.

The State that regulates this crucial transition point of education must introspect too. Once the protests die down, it should not be business-as-usual.