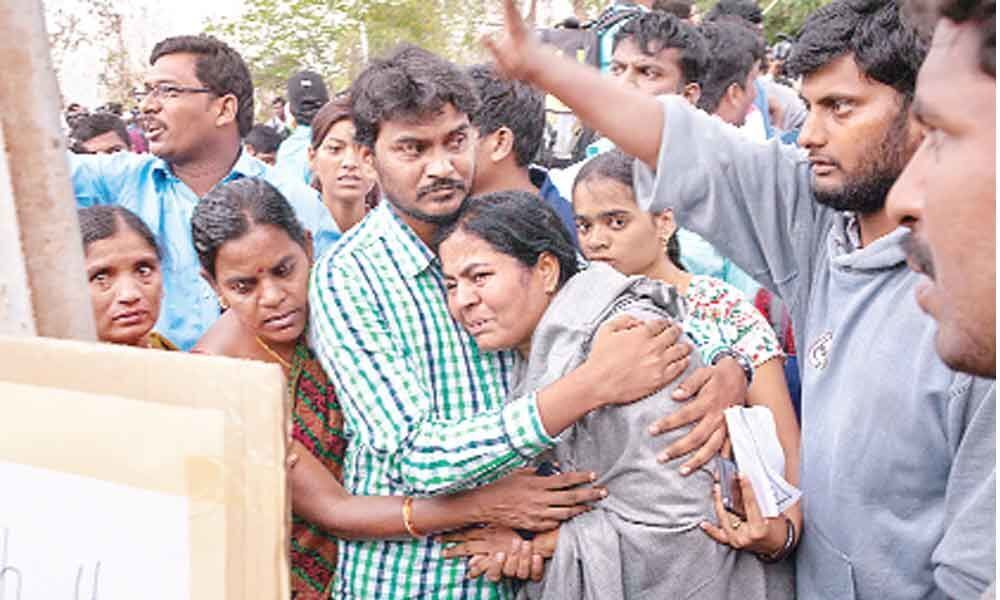 Soon, a calm of the graveyard descended on Telangana as the administration has shut down the protest venues like Dharna Chowk in the State capital as the rulers have achieved the Telangana that lays golden eggs for themselves and from now on people have no role in this. The matter now is between the dynamic government, industrialists and the global investors. The people seem to have done their job by voting
Highlights

Since the time Telangana was born on 2 June 2014 as the 29th State in India, it has seen brief spells of partial democracy during the elections when...

Since the time Telangana was born on 2 June 2014 as the 29th State in India, it has seen brief spells of partial democracy during the elections when the Model Code of Conduct was in place between the announcement of the polls and the dates of polling.

Partial because in the run up to the Assembly elections when the Model Code of Conduct was operational, civil society groups, students and others who wanted to go to communities to educate them about the electoral practices and assert their democratic rights, were routinely stopped, bound over or detained in police stations.

It is not clear which law prevents the civil society's engagement with the citizens for voter education. The political operatives had full freedom to move around with liquor and money supplies, however.

Thanks to the generosity of the Election Commission, the Lok Sabha elections were held separately in the State, giving us bonus weeks of partial democracy. Polling is over.

Now we resume our normal 'democratic' lives where we are not allowed to come on to the streets for any kind of public cause, unless it happens to be a religious procession however noisy or violent in its register. Neither are we allowed to gather in a hall to discuss issues of importance to us.

This mode of democracy manifested itself in Telangana starkly in September 2014 when thousands of civil society members came out in outrage to demonstrate against the brutal killing of youngsters Shruthi and Sagar.

Both of them were much loved young campaigners for separate Telangana State and deeply moved by the spirit of justice for the downtrodden. It was a stunning set-back for the encounter-free Telangana that everyone was aspiring for. But public expression of disappointment was not allowed.

That was soon followed by the events around Rohit Vemula's passing. The Telangana government played a duplicitous role in assuring one thing in its public statements but colluding with the University of Hyderabad administration to foist false cases on the victims and the protestors and ensuring that no justice was done to the family of Rohit or to his supporters.

Since then till the Assembly elections in December 2018, there have been a rash of caste-killings and atrocities against the Dalits in Telangana State. Close to 27 of them so far.

Each of the cases played out in a pattern. The nexus between the local police and the perpetrators with political connections would often ensure no cases are registered initially.

Only after days of protests and dharnas or High Court orders would the administration act. This was the case in Peddapalli, Nerella, Manthani and several other instances.

Even after the cases are filed under public pressure, they would rot in the courts, never to come up for hearing even as the accused are out on bail.

Soon, a calm of the graveyard descended on Telangana as the administration has shut down the protest venues like Dharna Chowk in the State capital as the rulers have achieved the Telangana that lays golden eggs for themselves and from now on people have no role in this.

The matter now is between the dynamic government, industrialists and the global investors. The people seem to have done their job by voting.

The administration began to crackdown on all protest meetings, whether called by veterans of Telangana movement like Prof Kodandaram, environment groups, teachers, or by student groups.

The shock of how Prof Kodandaram's door was broken at 3 am and how he was detained is too recent a memory.

At the peak of people's movements in Telangana, intellectuals like Prof Haragopal would not be detained or arrested. But that line was crossed last year when he was detained when he was launching the 'Save Education' campaign that demands strengthening of State-run education system and limiting privatisation.

Again, on 13 April last week, an indoor meeting of the Democratic Teachers Federation convened to demand the release of Prof GN Saibaba and Varavara Rao and eight others who are jailed on fabricated cases for fighting for civil and human rights of Dalit and Adivasi people, was disrupted.

The hall and the road leading to it were locked down. Several teachers along with Prof Haragopal were detained till the evening. It is not clear under which laws such detentions happen in Telangana today. And what makes a meeting to discuss illegal arrests of democrats a crime in Telangana.

Varavara Rao's (VV) partner Hemalatha poignantly reminded K Chandrashekar Rao (KCR) in her open letter, how he went to visit VV in jail to pay his respects when VV was illegally arrested at the peak of the Telangana movement.

She was hoping for a supportive response to her letter, which came in the form of disruption of the indoor meeting and detention of those who dare to engage the system. It is no longer possible to have any democratic dialogue with those who hold State power.

It is only during the time the Model Code of Conduct is in place that the civil society groups had a semblance of democratic space. That too perhaps because the political class was too busy with the machinations of the electoral contest.

In the newly-born State of Telangana, if you are not aligned with the power centre, if you are a victim, apart from the injury of injustice, those who speak up for you, be the lawyers, intellectuals or civil society groups, will be subjected to the insult of preventive detentions and arrests.

Just the other day, Manda Krishna Madiga who was protesting the breaking of Dr B R Ambedkar's statue and the disrespectful way in which it was transported has been placed under house-arrest.

It was therefore farcical to hear the rhetoric of the ruling party leaders in election rallies about how the Central government was undemocratic, tyrannical, because of its abuse of power against its political rivals.

their sights on national politics.

They demand democracy, federalism at the national level but ensure feudal autocracies in their home States. With champions like this, democracy does not need enemies to ensure its demise.