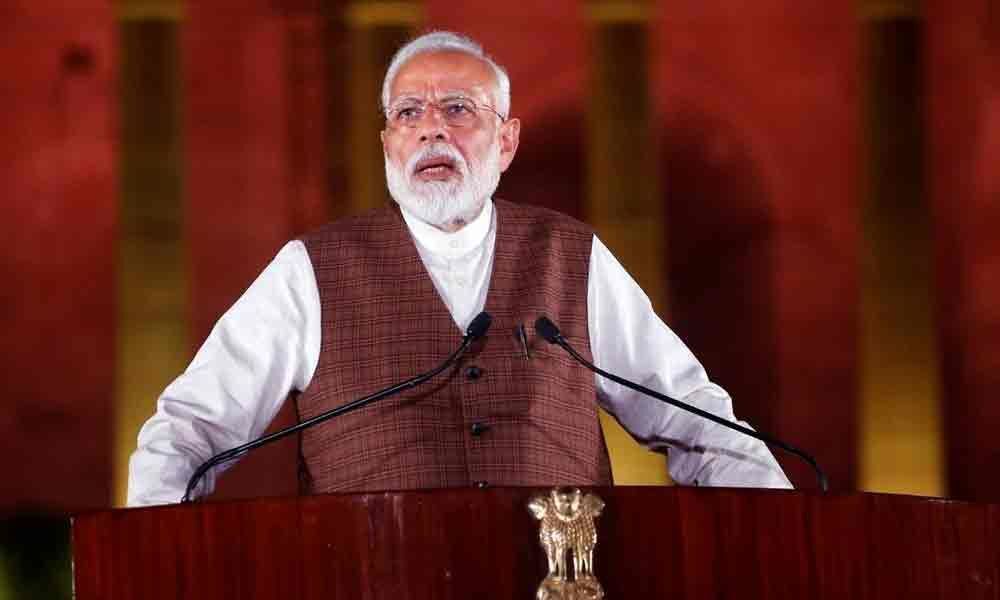 If the West Bengal Chief Minister, Mamata Banerjee, is attending Narendra Modi's swearing in ceremony on Thursday, she will certainly face a highly...

If the West Bengal Chief Minister, Mamata Banerjee, is attending Narendra Modi's swearing in ceremony on Thursday, she will certainly face a highly embarrassing moment as the BJP has chosen to humiliate her. While extending the invite to the Chief Minister, the ruling party has also extended invites to at least 55 members of the families of BJP workers killed in the last few years in West Bengal allegedly by the Trinamool Congress workers.

This, perhaps, is the second powerful message that the BJP is sending across to leaders who fought it bitterly in the recent times, including in the elections. A brainchild of Modi-Amit Shah, the idea is to keep the focus on Mamata vis- a -vis those family members. There is little that Mamata could do if she decides to attend the second swearing-in ceremony of Modi.

Earlier, AP Chief Minister designate, Y S Jagan Mohan Reddy, met Narendra Modi and Amit Shah on his maiden visit in his latest capacity and announced at a press conference that he would unleash the law against the former Chief Minister, N Chandrababu Naidu for the omissions and commissions under his rule as the first Chief Minister of the residual State of Andhra Pradesh after bifurcation.

"Though I don't have anything personal against Chandrababu Naidu, it is my duty as a custodian that I get the scams investigated. Some of them are of quite serious nature such as the land scams in the Capital Region where 'insider trading' had taken place with Naidu and his colleagues buying up vast extents of land having planned to ensure that the Capital would come up in the area.

Soon after the results in 2014, Naidu zeroed on Amaravati but kept misleading people citing several areas for the future capital till December 23 or 24th. Meanwhile, they have bought lands at throw away prices. Not only this, later on in the name of pooling of the land for the capital he gave away land cheap to his benamis. He himself has acquired 14 acres for his own Heritage Foods", Jagan declared.

The message was not lost to anyone after his marathon meetings with Modi and Shah anyway. After its huge win in the elections, the BJP leadership which is eyeing the Rajya Sabha numbers will not keep quiet politically. Elections are over and it has a more than comfortable majority in the Lok Sabha. But there are States like Rajasthan, Madhya Pradesh and Karnataka where it is not in power.

The turmoil in Karnataka is already an indication of the course of things to come by. Wily Deve Gowda seeks nothing more than preserving his self-interest in one manner or the other. And if he does display sufficient wisdom, the BJP knows how to destabilise the state government. Rumblings in Rajasthan and murmurs in Madhya Pradesh are no relief to the Congress reeling under the 'Rahul phenomenon'.

There is something wrong with Rahul Gandhi. Seriously. No one, least of all the President of the grand old party like the Congress, would ever resort to 'astra sanyas' as he has done. No one understands why he is chickening out and sulking instead of instilling confidence among the demoralised cadres.

In fact, no one ever gave the Congress even an outer chance of coming back to power. The result was only expected. Introspection should not lead to eating one's heart out or sport a grumpy face. Rahul has a huge challenge on his hand and he has the help of his mother and a doting sister by his side, apart from the dynasty worshippers.

Modi-Shah duo know the importance of the vital golden hour and do their best to precipitate matters further for the Congress. Look at West Bengal. It is not even a week and Modi has not even been sworn in for his second term, the ruling party is already trying to wreck the TMC. It has knocked away three legislators and a good number of local body leaders from the TMC ranks while announcing that, just as the elections, even defections would be encouraged in seven phases.

As Modi has already stated it is time for 'Sab ka vishwas'. How will the vishwas be earned, he did not specify. But, post-poll management leads to it and adds to the numbers of the BJP everywhere.

Ultimately, leadership is not about glorious crowning acts. It's about keeping your team focused on a goal and motivated to do their best to achieve it, especially when the stakes are high and the consequences really matter. It is about laying the groundwork for others' success, and then standing back and letting them shine.

If the Opposition does not brace up to hard times realising the mischief-potential of the BJP, it will lose the war. It is only the battle that is lost now for them. Modi is being crowned on Thursday and he has already gotten down to the business. Will the decimated Opposition follow suit?