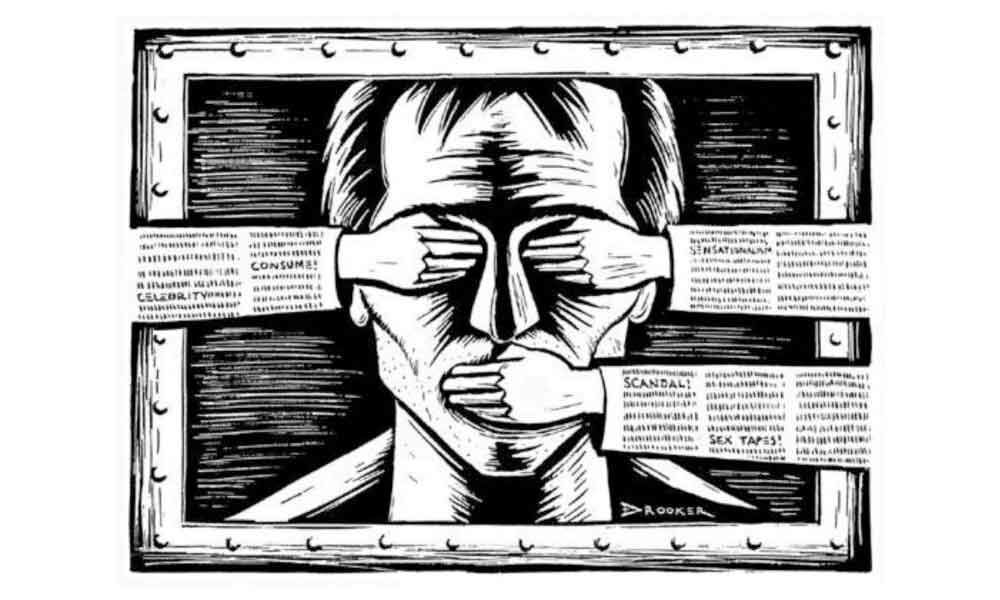 If there is any weapon that protects democracy, it is freedom to express a critical opinion.

If there is any weapon that protects democracy, it is freedom to express a critical opinion. Every democratic Constitution must facilitate, declare and protect the people's right to tell, write, represent, petition and challenge constitutionality of a policy that curbs expression en bloc.

The fundamental right under Article 19(1)(a) is not only exercised by journalists and TV anchors. En mass exercise of freedom of expression happens when millions of voters stand in queue to reject or continue a government. The roots of right to vote are in Article 19(1)(a) though it was provided by Article 324.

The Indian voter's responsibility does not end with voting, rather it begins. The political party's behaviour and relationship with people till they vote will be totally different after the they get power. The elected leaders think that they are answerable only after five years.

The voter or citizen should discuss to analyse the policies and decisions of the ruling party, whenever they are initiated. The journalist should explain the disastrous consequences if any.

Informed by the press, a citizen shall file RTI applications for some more information for further questioning the State. Every citizen, like every journalist, has a right to inputs from the media or other sources to question the wrong steps of any government. Building up people's opinion and pressurising the government to revise or reverse the policy is a dynamic requirement.

The Press Council of India is supposed to facilitate fair criticism and their proper publication. Fairness in imposition of restrictions on freedom of speech need to be reviewed and PCI should offer a way out. The PCI has a statutory duty to remove State obstructions to fair exercise of press freedom, and to intervene to prevent shrinking the speaking space.

Anuradha Bhasin, Executive Editor of Kashmir Times, has filed a Writ Petition under Article 32 before the Supreme Court seeking a writ to the Centre to relax total block out of media, mobile, internet and landline services, on freedom of movement of journalists and media personnel in Kashmir and some districts of Jammu to enable journalists to practise their profession and exercise their right to report, in furtherance of their rights under Articles 14, 19(1 )(a) and 19( 1j(g) and 21 as well as the Right to Know of the residents of the Kashmir Valley.

It is well known that from August 4 this year onwards, mobile phone networks, internet services, and landline phones have been discontinued and shutdown, leaving Kashmir and some districts in Jammu completely isolated and cut off from all possible modes of communication and information.

No formal orders under which such action was taken was communicated and the power and authority, behind such excessive and arbitrary action was still unknown. The communication blockade and strict restrictions on movement of journalists resulted in a virtual blackout, and media reporting and publishing grievously impacted.

A security advisory was issued by the Civil Secretariat, Home Department, Government of Jammu and Kashmir stating: ''Keeping in view the latest intelligence inputs of terror threats, with specific targeting of the Amarnath Yatra, and given the prevailing security situation in the Kashmir Valley, in the interest of safety and security of the tourists and Amarnath Yatris, it is advised that they may curtail their stay in the Valley immediately and take necessary measures to return as soon as possible."

United Nations Special Rapporteur on Freedom of Speech, David Kaye, in a statement dated 08.08.2019 reported by the Guardian, commenting on the communication blackout in the Kashmir Valley, has stated that the same is unprecedented and sets a worrying new standard for democratic states.

In Sakal Papers (Pvt) Ltd v Union of India (1962) 3 SCR 842, this manner of using indirect means to impinge, on the freedom of newspapers was held unconstitutional, stating inter-alia that, "'Its object thus is to regulate something which, as already stated is directly related to the circulation of a newspaper.

Since circulation of newspaper is a part of the right of freedom of speech, the Act must be regarded as one directed against the freedom of speech…." Such a course is not permissible and the courts must be ever vigilant in guarding perhaps the most precious of all the freedoms guaranteed by our Constitution.

Interestingly the Press Council of India (PCI) has sought permission from the Supreme Court to intervene in this petition in favour of communications restrictions in Jammu and Kashmir.

The main function of the PCI is to work for preserving the freedom of the press and journalists could expect legitimate intervention of independent PCI to rescue their 'freedom of press'.

It is reported that PCI Chairman has decided to intervene and oppose this pro-press-freedom petition, without discussing it Press Council meeting. The Chairman is required to get endorsement for such an intervention from the Council.

Two PCI members found wording of PCI intervention petition was dangerous and gives an impression that a free and open media was a threat to the nation's sovereignty.

Under section 13 of the Press Council Act, 1978 the PCI has a mandate to (i) maintain high standards of public taste, (ii) foster "a due sense of both the rights and responsibilities of citizenship" on part of newspapers, news agencies and journalists and (iii) to "keep under review any development likely to restrict the supply and dissemination of news of public interest and importance".

Even if the restrictions on the freedom of press could be imposed in 'national interest' or 'for national integrity' as claimed by PCI, the Supreme Court still has scope to examine a) whether total blackout was warranted, b) could there be limits on such wide-open restrictions, some parts of happenings could have been allowed to be reported, etc.

Even the period for which such total block out and reasonability of a whole-sale blockade for indefinite period could be examined on facts and circumstances. Reasonability of restriction in the context of the situation prevalent is what was envisaged by the Constitution.

It is not disputed that the Press or Internet freedom is not absolute. The legislature is in fact, empowered by Article 19(2) to impose reasonable restrictions on the grounds listed, which include national security etc.

Still there is a scope for judiciary to examine the need and validity of the blockade, its duration, lethal effects on right to know of the people in general. It is not just the freedom of speech of journalists in Kashmir, but the right to know, right to speak out and various other rights of the citizens in Kashmir which are totally curbed.

It is fundamental right of citizen to enforce his right to constitutional remedy, which is unique remedy incorporated in Indian Constitution, under Article 32.

The Press Council is supposed to act independently as an institution to secure the expression rights of the people at large and those of journalists. The Press Council cannot act like Union Home Ministry.