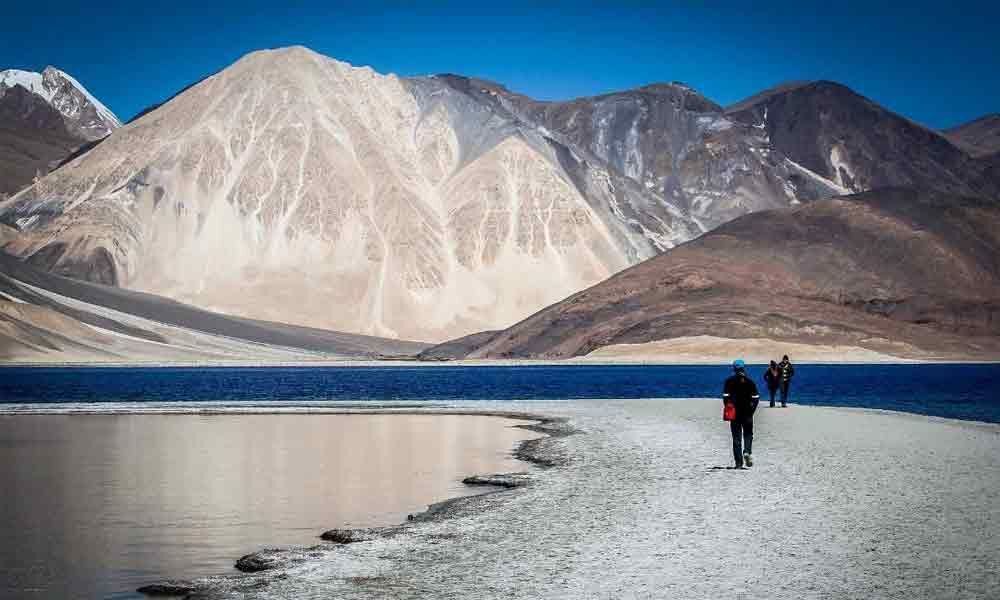 Blame global warming, and Ladakh is one of those places where its more evident than elsewhere.

Blame global warming, and Ladakh is one of those places where its more evident than elsewhere.

Extending from the Siachen glacier to the Himalayas, the picturesque region evokes mental imagery of Buddhist architecture and snow-laden surroundings. Now, both have begun to disappear.

Climate change is costing the region its identity in more ways than one. Wooden roofing of buildings is increasingly making way for concrete ones to cope with heavy rainfall.

Downpours, which used to be alien to the area, have been destroying Buddhist paintings and carvings in monasteries. Add to that the standard casualty of climate change: dwindling water resources and agriculture.

Traditionally, houses in Ladakh have had a wooden roof, built to withstand heavy snowfall. However, the receding glacial snow, unusually heavy rainfall, floods and changing weather patterns have significantly changed the lifestyle of the residents of the arid desert of Ladakh, the north Indian city bordering Pakistan and China.

To accommodate severe weather conditions, the conventional structures are now being renovated and modified into concrete spaces. The old wooden structures are unable to withstand the heavy rainfall Ladakh has been witnessing over the last few years.

Earlier, roofs in Ladakh were made of wood, stone and clay to withstand extreme snowfall. Such roofs are inadequate to protect in case of heavy rain.

Residents are now forced to use the more expensive tin or concrete to cover their homes. Owing to the rapid climate change, the region's culture is also under siege. Paintings and carvings in Buddhist monasteries that dot the cold region have been ruined because of seepage of incessant rains during the last few years.

A study on heritage conservation in Ladakh by the American Institute for Conservation of Historic and Artistic Works explained how this significant increase in rainfall over the last decade has affected different kinds of heritage structures.

"The region is now experiencing short but heavy downpours that the traditional mud structures are not equipped to withstand," the report noted.

The paper also discussed how old structures are facing extreme water seepage, which has caused both internal and external damage. The study also added that in the long run, melting glaciers from the Himalayan and Karakoram mountain ranges threaten these heritage structures.

Several theories have been put forward regarding the sudden climate change in Ladakh; locals, however, believe the government's green drive in the 90s-where thousands of trees were planted across the region-could be behind the unusually high rainfall.

Since the late 90s, the Army and other government agencies spent lakhs on the desert development programme for afforestation in Ladakh, planting trees like willow and other fruit-bearing plants to increase the green cover in the arid desert. However, there are no scientific studies to prove this claim.

Less snowfall and heavy rainfall are a major cause of concern for locals who say they have never witnessed such erratic climatic conditions. In 2010, flash floods shook the city of Leh where more than 200 people died and thousands lost their valuables and homes.

Rinchen Dorje, 62, a government teacher from Leh, changed his traditional wooden structure to concrete a couple of years after retirement to escape from the damage that rains cause almost every year. His house was partially destroyed in 2010 flash floods.

"Fear of rain and floods is still fresh in our minds," he said.

Iqbal Bijal, President of Society for Knowledge Improvisation Through Promoting Opportunities, an NGO working for the uplift of the poor in Ladakh, said there were times when the region would witness no rainfall throughout the year.

"This is a phenomenon we started witnessing after 2002," he added. Farmers have been significantly affected by climate change. Fruit farmers in Ladakh usually grow apricot while the others principally grow barley, wheat and paddy.

They claim their crop and fruits now taste different as the increase in temperature reduces the time they take to ripen. Tsering Nobru, a farmer from Choglamsar village in Leh, informed that apricots would ripen by mid-August in Ladakh earlier but now ripening happens much earlier in the month.

"While early ripening of fruit is better for farmers, the problem arises when trees bear fewer fruits," he said.

While heavy rainfall brings its own set of problems, lesser snowfall in the region has also affected residents in Ladakh. Farmers face severe water scarcity, and residents including hotel and guesthouse owners have been forced to consider alternative methods.

They now drill their own borewells to procure groundwater for the large number of tourists who visit the region every year from around the world. Slowly but surely, Ladakh is changing.