Ideological bankruptcy of NDA and UPA 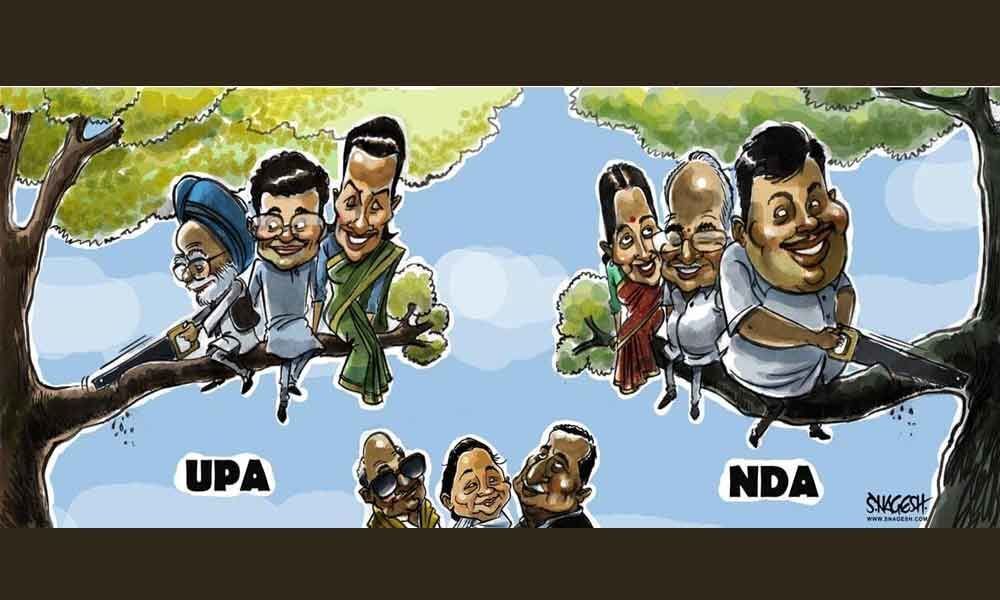 The basic problem of governance is how to make the rulers act in the interests of the people, not in their own.

The basic problem of governance is how to make the rulers act in the interests of the people, not in their own. At the same time, it is also a truth that every living being acts in his or her own interest.

The solution to this riddle is that there are different levels of self-interest. Gandhi rose above his personal interests of money and power; at the same time, he acted in his own spiritual interests.

The Hindu solution to this riddle was to strengthen the social role of the monk. It made a distinction between the Brahmin and the Kshatriya.

The Manu Smriti says that the Kshatriya can be controlled only by the Brahmin. It also says that the best Brahmin is one who does not know from where his next meal will come.

The voluntary poverty of the Brahmin enables him to stand up to the Kshatriya and speak the truth. Guru Gorakhnath thus stood up to the tyrannical ruler of Nepal.

He caused rains not to fall by this penance and forced the rulers to do his bidding. This system of governance was based on the idea that the Brahmin, the Sage or the Monk had a social role for only then would they take the risk and trouble of standing up to a Kshatriya ruler.

This system fell apart when the Hindu religion denied the material world and, therefore, also the social role of the monk. The dominant idea propagated by Adi Shankaracharya was that the world was unreal.

A fallout of this idea was that since the world did not exist, therefore, a monk need not confront the ruler and should instead make efforts to attain his individual salvation.

Thus, Tulsidas and Kabir pushed the people towards worship of the Lord and away from confronting the tyranny of the British rule in India. The Hindu Monks today continue to follow that false tradition.

The NDA has made the Ganga into the National Waterway No 1. It has converted the Holy Ganga into a donkey to carry cargo. The Monks of the country, however, are silent because they are focused on leading their followers to individual salvation.

The anti-people tyrannical policies of the NDA are thus continuing because the monks have absolved themselves of their social role of controlling the rulers.

The UPA has been only a trifle better. Jesus had implicitly propounded the principle that it was okay to ignore bad governance. At one time, Caesar had become tyrannous towards the Jews.

At that time Christ was asked whether it was right to pay taxes to Caesar. Jesus replied, "Render therefore unto Caesar the things which are Caesar's; and unto God the things that are God's."

In other words, Jesus accepted the writ of Caesar and looked the other way at his tyranny. There was no need to resist paying taxes to Caesar so that his tyranny was brought to an end.

In another incidence Jesus responded to the Caesar's satrap: "My kingdom is not of this world." The kingdom of Jesus was that of spirit while the kingdom of Caesar was of the world. The two were separate.

There was no need for the kingdom of spirit to resist the tyranny of the kingdom of the world. Thus, Manmohan Singh implemented many an anti-people policies.

He pushed for FDI in retail, dismantled reservations for the Small and Medium Enterprises, reduced rates of taxes on machine made cloth thus killing the handloom sector and provided huge monies to sustain the corruption in Public Sector Banks.

We can see a deep similarity between the philosophical roots of the NDA and the UPA.

Yet, it is also true that both needed to win the elections. Thus, both the alliances have implemented certain pro-poor measures. The NDA has provided free gas cylinders under Ujjwala scheme to the poor and virtually free health insurance under Ayushman Bharat.

However, that is a subject of a separate assessment. The common thread in the two policies is to create an anti-people economy and assuage the poor by giving them some doles.

Against this background, the new government that will be formed after the ongoing elections needs to implement the following steps.

One, compliance of GST must be simplified so that small businesses can focus on doing business rather than on making compliances.

Two, the large numbers of welfare schemes such as Public Distribution System, electricity subsidies to farmers and government-funded education and health provision should be dismantled and the money used to pay Universal Basic Income to all citizens of the country.

Three, the salaries and pensions of government servants must be frozen until their average salary becomes equal to the average income of the Indian citizen.

Four, all Public Sector Banks and Undertakings except those have a strategic role should be privatised and the receipts used to undertake research and make India a global knowledge hub.

NOTA is the best option until the NDA and UPA commit to these policies.