Science in polls, from feel 'good' to feel 'strong' 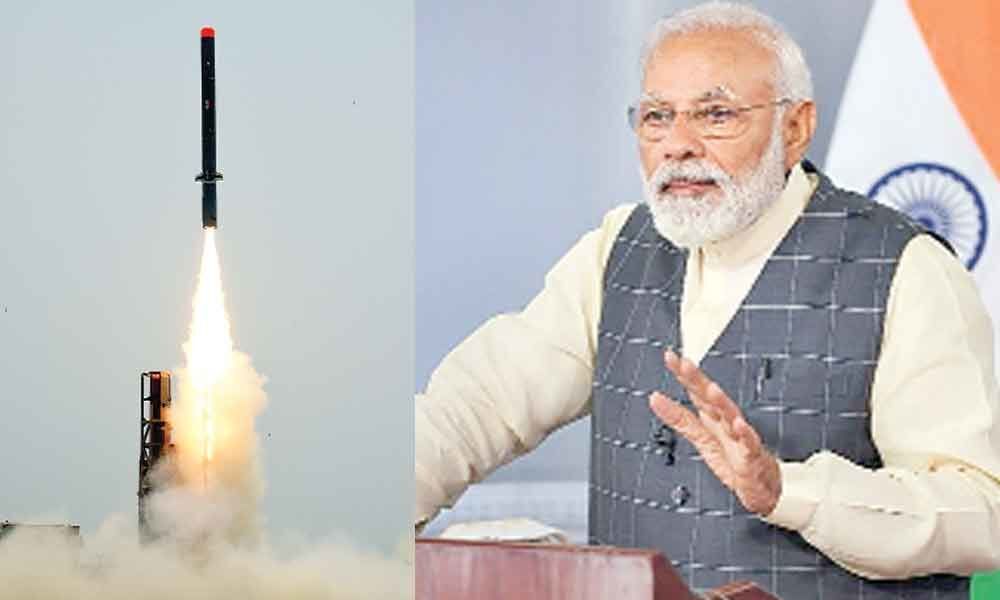 With the Balakot episode and later the ASAT declaration, the ruling party has brought ‘muscular science’ into the spotlight alongside oft-repeated claims of ancient India’ scientific prowess

Scientific feats seem to be emerging as the 'feel-strong' factor in the general elections, a leap from the 'feel good' debate over ancient India's scientific feats.

On March 28, when Prime Minister Narendra Modi declared that he was to make an extra-ordinary address to the nation, everybody sank into anxiety. But, in an unexpected twist, he made public, the successful testing of an anti-satellite (ASAT) weapon programme, called Mission Shakti.

As part of the mission, he said, an Indian weapon system shot down a satellite in Low Earth Orbit. The launch was carried from the Dr APJ Abdul Kalam Island launch complex.

More than the mission itself, the consequent debate concentrated on the electoral benefits of this success in a complex scientific mission. And Modi did time this keeping in mind the ongoing campaign.

Just before that, India's strike inside Pakistan on the camps of terrorists using sophisticated war planes was also followed by the celebration of India's technical might in the defence segment.

Since then, arguably, science, in broad terms, has been a key election campaign issue for the ruling Bharatiya Janata Party (BJP). Should we celebrate that science is finally turning out to be a definitive poll agenda?

It is not just the above hi-tech feats that are being talked about.

In the manifesto of the BJP, there are mentions of artificial intelligence (AI), data analytics and the use of new age tools to boost development in the country. Similarly, the Opposition Congress has also mentioned science and technology even though AI doesn't find a mention.

For those following the ruling government's scientific engagements, they will find a strange similarity in the narrative being built up. Its Ministers and senior leaders are already part of folklore for their highly contentious scientific claims about the scientific prowess of ancient India.

At the same time, we are also celebrating modern age technological superiority.

India is certainly basking in the glory of its ancient scientific achievements. Starting from the discovery of the "zero" to the "first" flight, the high and mighty in the political leadership have built the narrative of our advanced ancient civilisation.

The image of ancient India that emerges is of an "impeccable scientific super power". Debates and discussions on this dominate the National Science Congress. But it is also contradictory. The same political leadership interestingly refers to contemporary India as an "emerging soft power".

So, the next big question: should we celebrate the new-found focus on science in the political space, no matter how jingoistic and unscientific it is?

No, because the debate is selective in its focus.

And more importantly, it is not a scientific debate over the history of Indian society's scientific evolution. Science is definitive and its use is always political.

But the current debate on appropriating each and every bit of contemporary day-to-day technology or knowledge as "Indian" is not political. Rather, it is more of a certain type of cultural and religious propaganda.

The ongoing debate over scientifically-advanced ancient India has objectives that are diametrically opposite to science and its day-to-day uses.

Let us look at what the politicians of a certain ilk are focusing on. They talk about streams of science like aerodynamics, genetics, organ transplantation and inter-planetary movements that even modern scientists are still grappling with.

What do our Prime Minister and his Ministers find useful in spending time on such debates in the context of history? More puzzling is the fact that all of them look forward to non-Indian sources of basic science like generating electricity from solar power, irrigating our farms and also building wooden houses.

This is where science loses its political meaning. The claims of scientific genius in ancient times are mostly about what people popularly call "muscular" science.

And it is no surprise that in most of such claimed superlatives, contemporary India is grossly behind other countries. It is a cultural "feel good" phrase in India that incidentally uses science.

But, with missile technology and military power to mount precision attacks in enemy courtyards, this "feel good" scientific narrative has transformed into a "feel strong" narrative.

At the same time, the political leadership never speaks about the ancient scientific knowledge that dictated our tradition and culture but seemingly without the muscles that the current world order recognises.

For example, no politician from Rajasthan speaks about the scientific knowledge that made possible the most densely-populated desert in the world. But the state politicians still take pride in hosting India's nuclear weapon-testing site.

A politician who belongs to Uttarakhand even claimed that India exploded a nuclear bomb early in history. He forgot to take pride in his state's traditional wheat mills using streams that are now being used to generate electricity.

There is no doubt that ancient communities were scientific enough to master the art of living off the Earth's most precious natural resources. They codified science in their ways of life like domestication of rice or innumerable foods that ensured food security.

But when a debate that selectively and without scientific codes flexes muscles, a society suffers the most. No society can survive without some scientific temper, but the current debate ignores this aspect.

It is trying to segregate science on cultural and to some extent, religious basis. Science is being projected as the know-how of only those things that yield some cultural superiority. This brings the debate to the moot point: whose science should we focus on?

(The author is Managing Editor, Down To Earth. He has been associated with the fortnightly since 1997 and has written extensively on rural affairs and development matters)