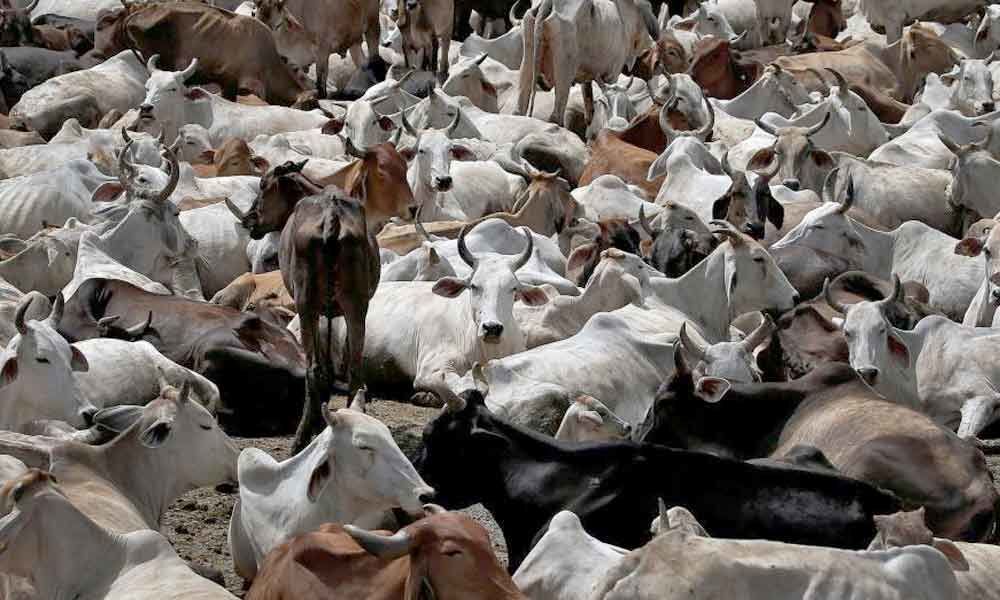 Sadhu Shukla, a farmer in Arjunpur village in Sultanpur, was happy till last week as his wheat crop had been exceptionally good.

Sadhu Shukla, a farmer in Arjunpur village in Sultanpur, was happy till last week as his wheat crop had been exceptionally good.

But today, tears cannot stop trickling down his eyes after his crop was trampled by stray cows.

"There has been a spurt in stray cows in almost all villages and these stray cows get into our fields and trample the crops. I was depending on my wheat crop for my daughter's marriage next year but now I will have to take a loan," he said.

"Gai hamari mata hai, magar ab isse nahin koi nata hai," he said angrily. Uttar Pradesh is facing a problem of plenty when it comes to cows and this, in turn, is becoming a major election issue in central and eastern UP.

After the Yogi Adityanath-government imposed a strict ban on cow slaughter and cow vigilantism was stepped up by 'gau rakshaks' (cow protectors) in the state, cows are being largely abandoned by their owners once they become 'dry' (stop giving milk).

These hungry cows enter the fields and damage crops. Though the state government claims to have built 10,000 shelters for stray cattle but the problem remains unresolved.

"Each cow entails an expenditure of at least Rs 6,000 to Rs 7,000 per month and we cannot afford to feed them if they do not give milk.

Earlier, we would have no problem in selling dry cows but now no one wants to buy them because of the fear of 'gau rakshaks'. Even transporting cows has become a huge problem.

So we simply leave them to fend for themselves," said Rakesh Singh, a farmer in Achalpur village in Tarabganj in Gonda district.

Stray cows are also posing a major traffic hazard, especially on highways and expressways. A senior traffic official said: "More than 35 accidents on the Lucknow-Agra expressway in the past two months have taken place because of stray cattle.

Vehicles on expressways move at a high speed and the sudden appearance of a cow forces the driver to apply brakes and the vehicle turns turtle.

No one takes responsibility for the stray cows and we do not have adequate traffic police for the highways and expressways."

In fact, Deputy Chief Minister Dinesh Sharma escaped a major accident recently when a cow suddenly appeared before his car on the highway, forcing the driver to swerve.

In Kannauj, during an election rally last week, a bull went on the rampage causing a stampede.Even in A class cities like Lucknow and Kanpur, stray cows can be seen in herds roaming the streets and causing traffic snarls.

State Minister for agriculture, Surya Pratap Shahi washed his hands off the issue by saying that the matter of stray cows did not concern his department.Officials in the animal husbandry department said that their department was not "drafted to deal with the problem".

A senior BJP leader, on condition of anonymity, admitted that the problem was getting bigger and farmers were suffering a loss of their crops. "This is a major election issue though candidates avoid addressing it," admitted the leader.