The national template for hounding critics 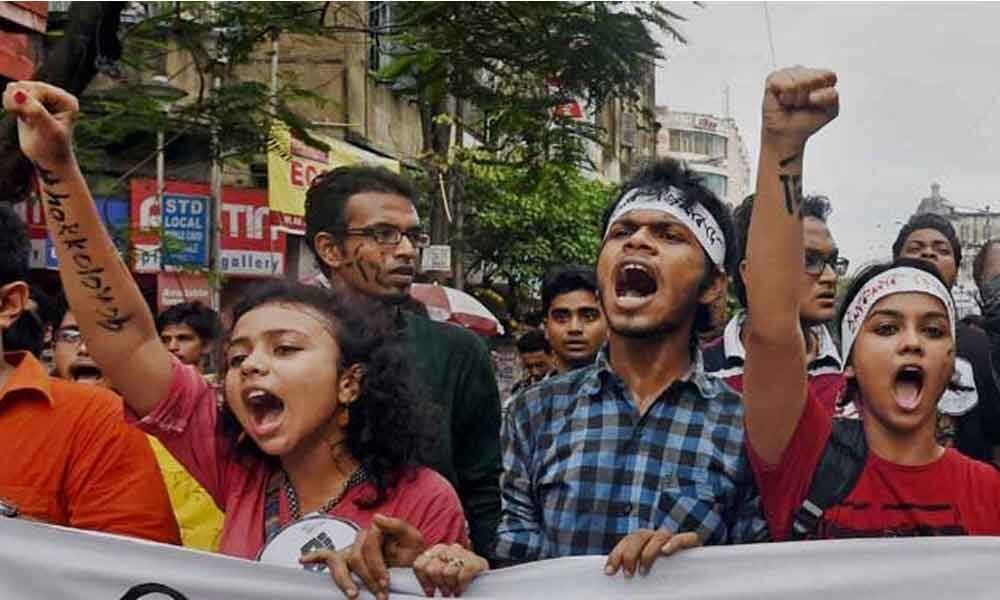 The country may be in the throes of a bitterly fought election, waiting for the outcome, but the project of the BJP-affiliated sister organisations to occupy university spaces is alive and well.

This parivar has perfected the template for its anti-Dalit, anti-minority politics.

Satavahana University located in Karimnagar in Telangana is a young university establishing itself as a vibrant intellectual hub, providing a lively learning environment for the young men and women of the region.

Attempts to malign and attack Prof Sujatha Surepally, a professor of Sociology in the University, began since 25 December last year, when a group of students burnt Manusmriti in front of the University gate. This symbolism began in 1927 when Dr B R Ambedkar burnt Manusmriti to question the caste structure imposed on Hindu society by Manu.

BJP-affiliated groups attacked the students on that day, falsely claiming that they burnt the images of Bharatmata. Cases were filed against the students.

The BJP-affiliated groups began a vicious campaign on media maligning Sujatha for instigating and leading the students. Sujatha, however, was in Hyderabad on vacation and not on campus that day.

In the latest instance, Sujatha took her students on a study tour to the Adivasi communities in Bhadradri district.

The BJP-affiliated organisations started a campaign against her calling her a Maoist sympathiser, falsely accusing her students of meeting the Maoist leaders and getting financial support to build the movement among the university students.

The trip was university sponsored. Evidence of transportation, accommodation and locations visited are all publicly known.

And those who follow Sujatha know that she has been a critic of Marxist blind-spot towards caste in India. She contested in the December 2018 assembly elections on Bahujan Samaj Party ticket.

Social media groups began a coordinated attack on Sujatha indulging in character assassination. Groups pretending to be saviours of Satavahana University began posting against her, which had to be rebutted by the employees' union. Sujatha has been an active member of campus life and has supported student and employees' issues time and again.

As in any other university, there are student organisations from various political vintages in Satavahana University too, but because of some cautious mentoring, they work as a Joint Action Committee (JAC) on most issues that concern the university. Telangana Vidyarthi Vedika (TVV) is a part of the JAC.

TVV has been in the forefront of a campaign against privatisation of school and higher education as part of the All India Save Education campaign.

The BJP-affiliated groups confront TVV repeatedly as TVV are ideologically opposed to privatisation of education and are campaigning for strengthening state-run education and demand common school system.

They label TVV as a front organisation of the Maoists. The police commissioner of Karimnagar endorsed this to the media saying that some of the people associated with TVV were arrested for their links with the Maoists.

He named Nazir, a student of Osmania University. Nazir, a young poet and scholar, was arrested along with a journalist, an Adivasi rights activist and high court lawyers affiliated to the Telangana Democratic Front in December 2016.

All of them were a part of a fact-finding team going to Chhattisgarh to investigate a fake encounter when they were arrested in Dummugudem in Telangana and produced as arrested in Chhattisgarh.

They spent several months in jail in Chhattisgarh but all were acquitted. The case is a text-book instance of abuse of state power.

The judge found the procedure followed for charging them under the Chhattisgarh Special Public Security Act flawed, and also the entire evidence produced to prove that they were associated with the Maoists false.

On the dates and times when they were supposed to have met the Maoist leaders, the lawyers were arguing cases in the high court and Nazir was on record as a student taking an exam in Osmania University. These were easily provable facts.

Among the "incriminating and dangerous" subversive literature found from the group was a novel by Somerset Maugham, Of Human Bondage!

They also found issues of Veekshanam, a current affairs journal that most students appearing for competitive exams read for its high-quality analysis.

The court in Chhattisgarh acquitted all the seven people arrested under false charges. But Mr Kamalasan Reddy, the Commissioner of Police, Karimnagar, with obvious contempt for the judicial procedure, continues to label them as 'people with Maoist links.'

One of the reasons for the attack on Prof Sujatha was her support to the campaign for release of the lawyers, activists and writers arrested in Bhima-Koregaon case on fabricated evidence.

And the release campaign for Prof GN Sai Baba, who is wheel-chair bound but somehow considered a threat to the mighty Indian state.

Many civil rights groups all over the country are campaigning for the release of the 79-year-old Varavara Rao, the poet, and the others.

In Bhima-Koregaon case too, the first FIRs accused Milind Ekbote and Sambhaji Bhide, the right-wing upper caste leaders, for the violence against the Dalits. It was the properties of Dalits that got destroyed. Dalit lives were lost.

But with the help of a concerted campaign on media and the active role of the Maharashtra police, evidence was fabricated to arrest people who have had nothing to do with the Bhima-Koregaon violence, but were activists and lawyers defending Dalit and Adivasi rights.

They are all in prison without bail over the last several months while Ekbote and Bhide are roaming free.

The template for accusing Prof Sujatha Surepally and TVV of Maoist links is similar, with media and the police establishment actively supporting the BJP-affiliated groups.

The deliberate dumbing down of the debate around the issue of minority, Adivasi and Dalit rights has made visiting any tribal area like Chhattisgarh or Bhadrachalam a code for Maoist activity and demand for justice by Dalits and Adivasis, short-hand for Maoist sympathiser.

Rumour-mongering on social media by people representing the upper caste powerful and the local police establishment stepping in to support them instead of the victims has become a national template now for persecution.

The police establishment continuing to label people acquitted by the court after a thorough trial is gross misuse of state power to shut down all means of redress.