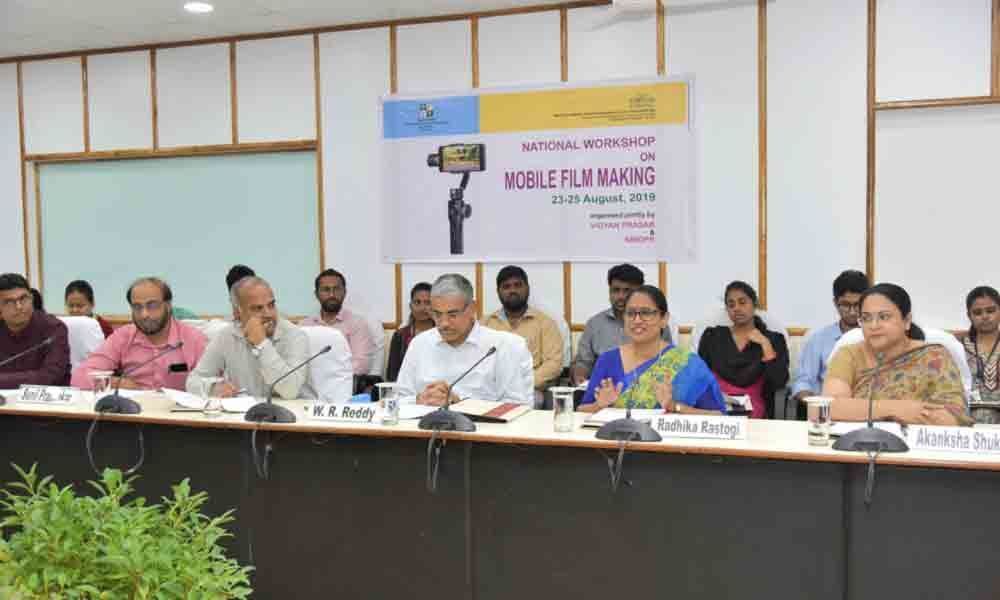 Workshop seeks to leverage the potential of films to reach India’s 560 million active internet users, most of which are residing in villages

Hyderabad: National Institute of Rural Development and Panchayati Raj (NIRDPR), Hyderabad in collaboration with the Vigyan Prasar unit of Ministry of Science & Technology organised a three-day National Workshop on Mobile Film Making from August 23-25. The inaugural of the workshop was held on the Institute's premises on Friday.

Welcoming Dr. W.R. Reddy, Director-General, NIRDPR and other guests and participants at the inaugural ceremony, Radhika Rastogi, Deputy Director-General, NIRDPR, spoke about the importance of filmmaking as an effective medium in rural development. "By watching biographies, we get a crisp idea about the life of great luminaries, and these films leave a great impact on our lives. The Indian States have surpassed Hollywood in terms of the number of movies produced every year. There are few events in life which we cannot revisit, such instances should be filmed. The participants should utilise the opportunity to make the most out of it," she added. The workshop was coordinated by Dr. Akanksha Shukla, Associate Professor, CPGS&DE and Head, Centre for Development Documentation and Communication, NIRDPR.

Dr. W. R. Reddy, IAS, DG, NIRDPR welcomed Sunil Prabhakar and Ritesh Taksande, the resource persons for the workshop. He remarked that people should always have a creative aspect in life. "They should try their hand at other professions to understand what they are. Filmmaking is one such activity," he said and encouraged the students to actively participate in the event. He also urged them to record inspiring stories from the ground, of rural India, through the films that they will go on to make in the field.

India has 560 million active internet users, most of whom reside in the villages and now have access to affordable mobile data. In this context, amplifying the use of audio-visual content to share knowledge, best practices, and raise awareness on critical issues may be a sustainable and smart medium for Information, Education and Communication (IEC) dissemination. Shri Sunil Prabhakar, technical trainer, who organises workshops for the United Nations, adding to this, pointed out that 97 per cent of internet users watch videos online. This reaffirms the opportunity that is presented before us, to reach the masses by communicating through powerful films that resonate more effectively with the people.

The students were taught the basics of filmmaking, such as using camera shots, story approaches, script writing and film editing. Emphasis during the workshop was given to training them in handling pre-production, production and post-production using a smartphone. Addressing the gathering, Ritesh Taksande, a filmmaker from Pune, drew attention to the urgent need to create movies that promote science education.

On the second day of the workshop, national award-winning science films 'Gharat: Revival of Watermills' and 'Naula: Water Temple of Himalayas,' and IISF award winning film 'Chilli' were screened and the resource persons held discussions with the participants on various technicalities. On the final day, the participants were divided into groups for producing short films using the training they received in earlier sessions.

At the valedictory of mobile filmmaking workshop held on the final day, Dr. Akanksha Shukla, Associate Professor, CPGS&DE and Head, CDC welcomed the dignitaries and sought feedback on the workshop conducted. Mr. Santosh Pandey opined that the programme could trigger creativity in participants and acknowledged their attention, commitment and sincerity, adding that they must get their thoughts organised and ensure that the message is communicated effectively.

Summing up the programme, Dr. Aryashree Debapriya, Associate Professor, CPGS&DE said the workshop gave him an opportunity to discover the creative side of the students, adding that the learning would help them a long way in sharing their messages to society as rural development practitioners. He also mentioned the role played by Vigyan Prasar, and their constant association with NIRDPR.