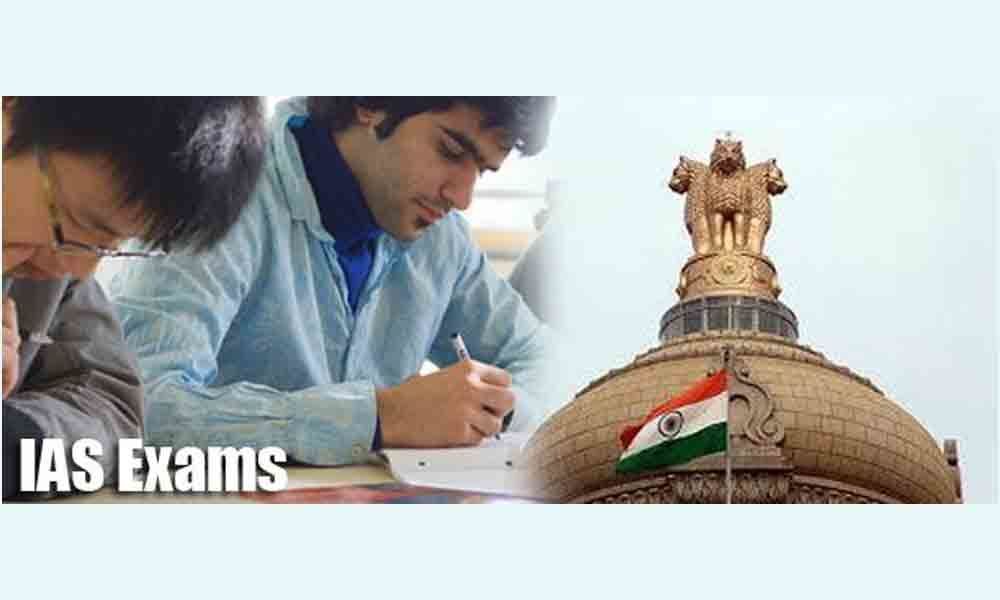 Civil Service examination is a three tier procedure to screen the candidates in large number. The patience, confidence and clear thinking are the essential ingredients.

Civil Service examination is a three tier procedure to screen the candidates in large number. The patience, confidence and clear thinking are the essential ingredients.

It is an examination to test the attitude and aptitude of the candidate. That is the reason in mains examination, general studies, a paper called Ethics, integrity and aptitude is prescribed as a compulsory paper. The civil servant is a prominent pillar in eh government hierarchy.

The launching pad for success is to have self confidence and determination to crack the examination. Most of the candidates think about ample number of chances-six for O.Cs (General category) etc. they don't take care during the first two or three attempts with the hope of availing other chances. They doesn't understand the intricacies in the examination system in eh first attempt. Friends, relatives discourage them by mentioning it is a difficult task to win. The foundation for the civils is not given while undergoing degree courses. The magnitude of the competition threatens the candidate. The advice from parents at an early age is needed.

The traditional way of teaching and answering the objective type questions up to degree level is the common practice by by-hearting the answers in coaching centers. The approach towards Civils shall be completely new. For example let us take the topic- Indian modern History. Preparation for it will take a full month or so depending on the level of assimilation by the aspirant. Lot of material in the form of books by experts is available in the open market. Coaching centers supply detailed notes besides test papers.

Class room teaching gives a confidence based on the expertise of the faculty. In Indian History, right from the advent of British rule in India to the Independent India is the core subject to be studied. Simple reading will not help. Candidate's perception on eh subject is important. Let us examine a question asked during one of the years. "Imagine eh independence movement without Mahatma Gandhi.

No text book deals with this theory in mind. They narrate different historical movements and the persons involved in them. This question, though hypothetical, it is thought provoking. An intelligent answer is needed. It needs maturity of thought besides the contextual perception.

The examiner never expects the candidates to be Xerox machines to replicate the answers. Candidate has to have his own ideas on the content which he read during preparation. In 2018 prelims, most of the candidates were under the impression that it is a difficult question paper, since the way of questioning was different from the earlier years.

So, the much-needed skill is that the candidate should have a detailed knowledge on the subject to answer the question with any twist.

Whether it is public administration, economy, History or other subject, the interpretation to modern day thinking is essential. In the Indian History, eh role of Netaji Subhash Chandra Bose, Sardar Vallabhbhai Patel are to be studied in depth. Different satyagrahas, movements and their leaders' role is to be estimated at length. Mere reading will not help in answering the prelims questions. Answering number of test papers in a row will definitely help in scoring marks.

Candidates should keep in mind that the preparation for civils should include for all eh three stages, preliminary, Mains and personality test. A prelim is an objective type. But in mains it is subjective and needs elaborate answers depending on the number of marks allotted and wordage needed as per instructions. In prelims the GST introduced recently may be in eh form of AB C D answering.

But in mains candidates has to elaborate to the extent needed with difficulties face by the customers or institutions. In the interview one has to analyse the system and the loopholes it has if any.

The general perception of the voters and the impact of it on General elections of 2019 are to be studied. . Similarly the question of demonetisation is to be studied with statistics on hand. So, the preparation from the beginning should be an analytical approach and in-depth study. It is a combined study and grasp on the subject.

Sepoy mutiny: Take for example, the sepoy mutiny of 1857, is a land mark in Indian History. The question can be whether it is the first independent movement or an attempt to revoke the past history? It may not be a direct question but it can be clubbed with modern revolts in different parts of the world.

Candidate should apply his mind in analyzing the situation with proper understanding on the subject. It will not be written in any text books or notes given by coaching centers. Who is Mangal Pandey? When did he revolt? Who is the English solider who killed Jhansi Laxmibai? – These are some of the points which are to be kept in mind while reading the original texts. So, the preparation should be an isolated attempt for prelims. It should include mains as well as Interview.

Hardly 100 days will be left between prelims and Mains. So, the study of all the 7 papers of mains should be done during the preparation of Mains. The qualifying compulsory papers- Indian language and English are never to be neglected.

The optional paper which the candidate has taken is a scoring subject and gaining hold on the choosen subject is most important. Candidates change the optional subject after one or two attempts with the wrong notion it is not a fetching subject. They migrate from Public administration to anthropology and anthropology to Telugu language with the fond hope that they can score easily.

It is simple waste of energy and time. Take a firm decision before choosing an optional.

The advice of seniors who have already appeared and the faculty available at a particular coaching center where you have enrolled is important. Basic knowledge on the subject is needed to go ahead with the studies.

In certain areas the guest faculty has earned name as good teachers and they carry on with them the expertise needed to be imparted during the 10 months coaching.