Ramayana, the embodiment of ideal civilisation 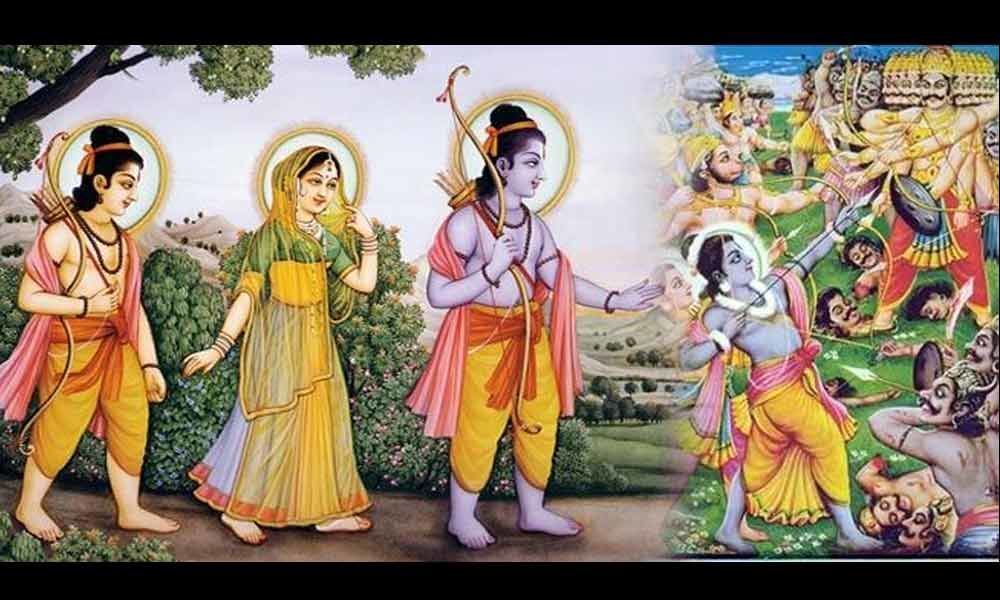 The Ramayana is ‘’ a mirror of the highest ideals of Indian cultures. It forms the very warp and woof of Sanatana Dharma”.

The Ramayana is '' a mirror of the highest ideals of Indian cultures. It forms the very warp and woof of Sanatana Dharma". A renowned practical vedantist like Swami Vivekananda hails it as an encyclopaedia of ancient Aryan life and wisdom portraying an ideal civilisation which humanity has yet to aspire after.

An eminent scholar like KM Munshi says '' Dharma, understood in terms of the twin concepts of Satya and Tyaga, so perfectily personified in one extolled as ''Vigrahavaan Dharmah'' is the one unique constituent of the pattern of life handed to us by our ancients which is valid for all times or for all people.

At the present day, when our moral forces are making havoc of our lives, distorting our views and disrupting our foundations, we cannot do better than hearken to the voice of Sri Rama uttered through his several actions signifying the eternal ideals of our Sanatana Dharma.''

True, The noblest character among the Indian Classics is Sri Rama, acclaimed as the very embodiment of Dharma.

A Dharmatman, he possesses such great virtues as utter renunciation, self-abnegation, serenity in the most trying circumstances, love of truth and justice, intellectual prowess, moral earnestness, probity of conduct, judicious mind undisturbed by prejudices, wonderful power of forgiveness, restraint and respect for all, unflinching filial duty, love ,sympathy fidelity to promise and friendship, admiration of noble qualities of even enemies etc. A glimpse of the great avataar!

Sri Rama sets an example of how rulers should acquit themselves in the face of temptation to secure private benefit in scorn of public good. Earlier, he tells Bharatha,''As is the eye to the body, so is the king to the state. He is the source and exemplar of Satya and Dharma and the sustainer of the people.

However unwarranted his action might seem in sending away Sita to the ashram of Valmiki, he sticks to the notion that a ruler should respect public opinion far above his personal likings and prejudices.

As KM Munshi says ''Sri Rama put away Sita after a conflict of emotions in pursuit of an overriding duty as king to respect the wishes of his people. By this act , he added the last touch to his art of living. A king who serves his people has no personal life of his own. The demands of public confidence are inexorable.

Even modern Britain overruled her king's choice to marry the woman he loved and removed him from the throne when he preferred private happiness to public duty.''

When Dasaratha asks him not to go the forest and even advises him to overrule himself and take the crown, Rama prefers to go to the forest if only to help his father to keep his word to Kaikeyi.

He says "This kingdom, happiness, Sita, all these pleasures and my very life----these I do not wish for; I want to see you truthful.'' A personification of humility and noble forgiveness, he extends his hand of friendship to Vibhishana with the comment '' He may be even my bitterest enemy like Ravana himself. But if he comes to me in a friendly and submissive spirit, I will not turn him back.'

In the Kirttivas version of Ramayana, Sri Rama learns Rajneethi from the dying Ravana. An astonished Ravana replies '' The most important thing in life is to avoid postponing things. A good work should not be delayed, else it may ever remain undone.

It is as much beneficial to delay the bad acts as it is to hasten the good ones.'' He enlightens his brother Lakshmana ''Truly our scriptures say,' a gem is precious in spite of lying in filth for a gem is a gem wherever it is.'' Our political leaders who are adepts at character assassination of their opponents can open their eyes to the magnanimity displayed by Sri Rama.

He tells a reluctant Vibhishana to perform the last rites for his brother Ravana with the noble comment ''I did not kill an ignoble man in the battle. Ravana is a great warrior , a great king who greatly

According to erudite scholars , one has to discover the esoteric meaning of the Ramayana to understand and enjoy it. Dasaratha symbolises the intellect that controls the ten senses. The three queens of Dasaratha are the three gunas known as Sattwa (tranquility), Rajas (activity) and Tamas(inactivity).

Ravana is the rajasic ego. Kumbhakarn is the Tamasic ego. Vibhishana stands for Sattwic ego .Sita is the Cosmic Energy(Kundalini) abducted by Ravana, the ego for wrong use. Hanuman symbolises pranayama . Union of Rama and Sita is the union of Shakti with the eternal consciousness of the true Self.

Vasishta and Viswamtra are the gurus who guide the intellect. Sri Rama is the transcendental self and Lakshman, Bharatha and Shatrughna are the triple manifestations of God as immanent, God as in-dwelling spirit, and God as soul respectively''

G Naganathan , a profound scholar of Indian classics hails the Ramayana as a ''beautiful melange of the divinely human and the humanly divine. Were Rama all divine, humanity would have left him severely alone.The attraction, the kinship we feel with him is because he is so human.

Rama himself says "Atmanam,manusham manye.'' To conclude in the words of S Ramakrishnan ''The Ramayana has been through the ages , the basic formulation, the catalyst, the ambrosia of immense potency in moulding the cultural mind and safeguarding the cultural unity of India ''