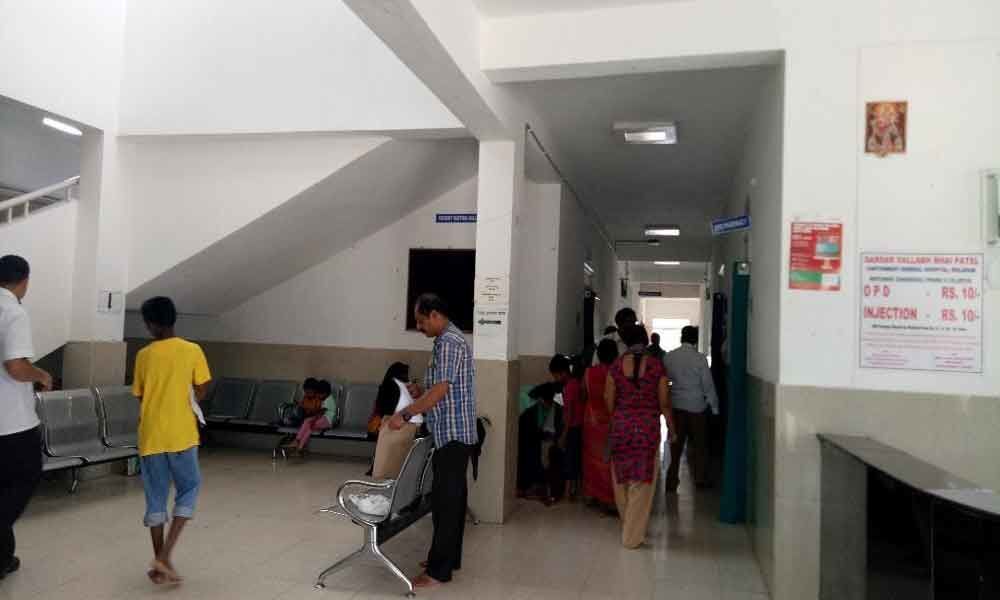 Patients visiting Cantonment General Hospital, Bolarum, for medical services are forced to opt nearby private hospital and government hospital for...

Secunderabad: Patients visiting Cantonment General Hospital, Bolarum, for medical services are forced to opt nearby private hospital and government hospital for treatment, due to shortage of specialist doctors in major departments like ophthalmology, gynaecology, and orthopaedic wings and paramedical staff. Apart from this, the hospital does not have an Ultrasonogram machine.

Despite having good infrastructure, boasting of adequate equipment, nice open surroundings with spacious parking facility, it is a 30-bed hospital. The hospital, which is supposed to run for 24 hours, is currently functioning only till 3.00 pm, and it is causing inconvenience for the patients. Other than that, children ward, ophthalmology, radiology, gynaecology, physiotherapy, dental wards, examination preparation room and operation theatre are all shut due to shortage in doctors.

The state government has proposed to club the cantonment hospital with urban primary health centre due to the financial crunch of SCB, and it is progressing in a snail's pace. Also last year, Ultrasonogram machine was sanctioned, but it is yet to be received. "We have mailed several letters to the district medical health officer (DHMO) about this issue, but no response yet," says Dr Manju Rani, a medical superintendent at Cantonment General Hospital.

The hospital has scope for attending around 300 outpatients, but not being utilized fully due to lack of funds and adequate doctors. As in 2017, the Health Minister promised to provide sufficient medical staff and work is running at a snail's pace. At present, around 150-200 outpatients come regularly for general medical treatment.

As the hospital is just 5 min from the main road, trauma and emergency cases do come, but due to lack of doctors, the cases are being referred to other city hospitals. On the other hand, two years back when the Health Minister C Laxma Reddy visited the hospital, he announced for the maternity and delivery services for the hospital earlier but still it is a long dream.

The hospital has been functioning with just 3 permanent doctors, including the medical superintendent, since the last two years, and it requires seven more doctors. Apart from this, there are only 4 nurses, as opposed to the required strength of 11, and two sanitary workers for maintaining cleanliness in the hospital. Also, there is no laboratory facility at the hospital and an ambulance was sanctioned, but no driver is available due to the funds crunch.

The hospital is equipped with an x-ray machine, equipment and a radiologist to handle it. It is a 30-bed hospital and it also has a pharmacy, but right now it is functioning only for out-patients, as there are no sufficient doctors to attend the patients, added Dr Rani.

As the state government proposed to club the cantonment hospital with the urban Primary Health Centre (PHC) and it will also be a 24 hours service, and right now the proposal is with the Principal Secretary, and action is awaited, said J Lokanadham, the elected representative of SCB ward eight, where the hospital is located.