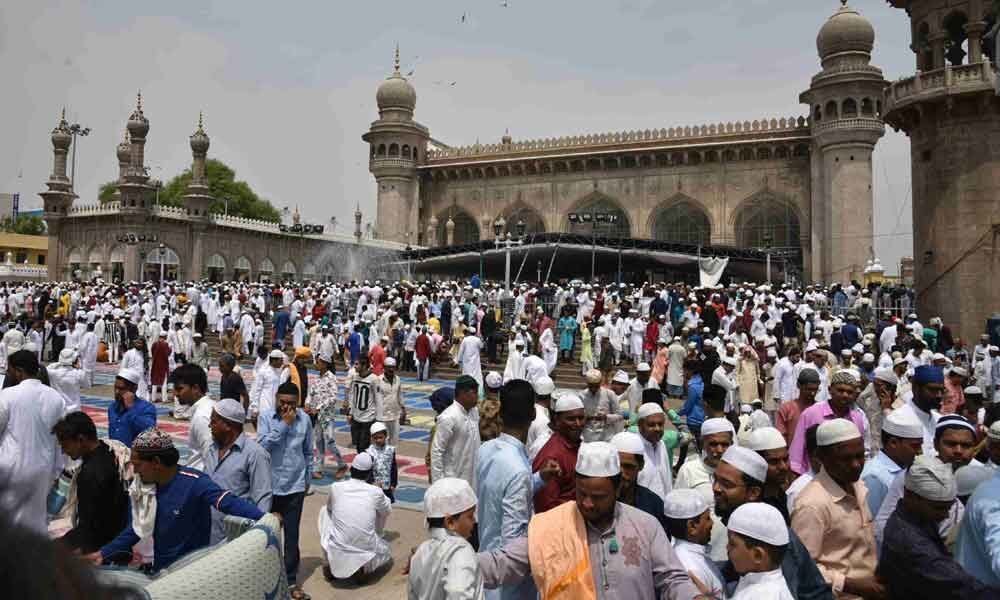 Eid-ul-Fitr, marking the end of Muslim holy month of Ramadan, was celebrated with religious fervour and gaiety across twin cities on Wednesday.

Hyderabad: Eid-ul-Fitr, marking the end of Muslim holy month of Ramadan, was celebrated with religious fervour and gaiety across twin cities on Wednesday.

Thousands of Muslims offered prayers at Eidgahs or open grounds and mosques in the twin cities of Hyderabad and Secunderabad and in other towns of Telangana.

Attired in new clothes and wearing skull caps, men and children thronged the venues since morning for the 'Namaz-e-Eid'. The 'Imams' or priests in their sermons urged Muslims to continue the good deeds of Ramadan and to have empathy towards the poor and the society at large.

Before offering prayers, every Muslim family paid Fitra or charity (Rs 100) on behalf of each member so that the poor can also celebrate the festival. Well to do families also paid 'Zakat' or 2.5 per cent of Islamic tax on their wealth to the poor and needy.

Guests were treated to sheer khorma (special sweet made of vermicelli, milk and dry fruits) and other dishes. The shopping for Eid continued throughout the night and till Saturday morning. Markets around historic Charminar in the old city and other parts of the city were alive even at night. Muslims form 12.43 per cent of Telangana's population of over 3.50 crore.