No water, no vote, vows Laxmiguda 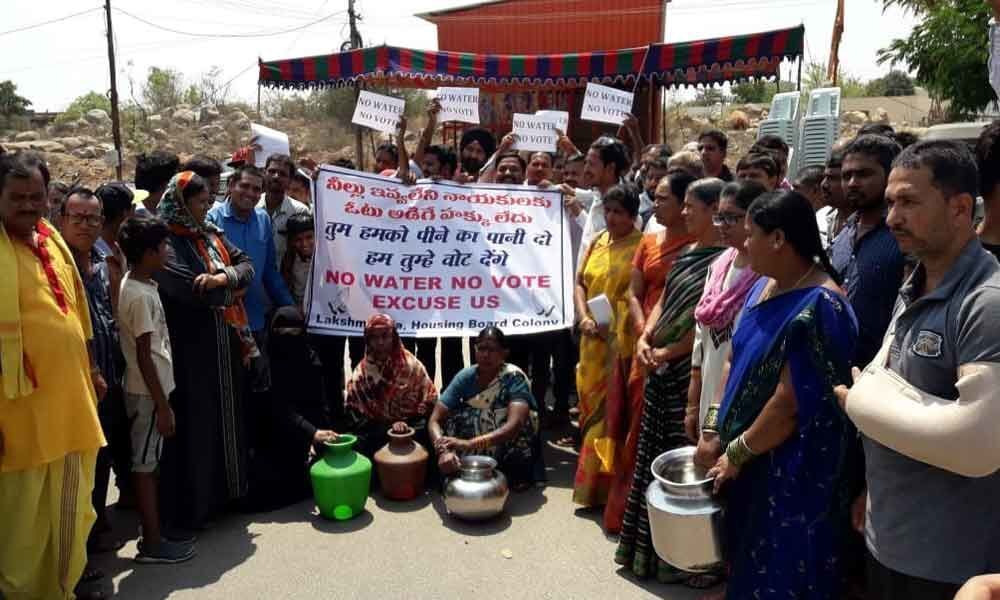 The residents of Laxmiguda Housing Board Colony staged a protest here on Sunday and demanded water supply, lest they would not cast their vote.

Laxmiguda: The residents of Laxmiguda Housing Board Colony staged a protest here on Sunday and demanded water supply, lest they would not cast their vote.

Laxmiguda Housing Board Colony consists of 600 houses approximately with a population of 5,000 people and more than 2,500 voters. Most of the residents belong to the poor and weaker sections, who work hard to earn their livelihood and stay on rent.

Dr Amit Soni, a resident, sharing their problems, said, "The problem started four years back when the Housing Board Colony handed over the responsibility of collecting money and payment of water bills to the association, but due to the Housing Board which was already in debt to HMWSSB wanted to get rid of the payment responsibilities and handed over all the pending debts to the association.

"The association did not follow the payment routine properly which resulted in HMWSSB sending a pending bill of 54 lakh to the Board. It later cut down the water supply to the whole 600 houses. Later, the Rs 54 lakh amount was cut down to Rs 33 Lakh. After consulting all the government officials, we were advised to collect the pending bill and pay it, which all the residents agreed to. But, it's been 3 years and there is still no update on this," added Amit Soni.

Vijyalakshmi, another resident, shared that, "The government took the applications to give new connections to all the colony members with a pending bill of Rs 5,000 and new connection fee of Rs 13,000. Rs 1,200 is paid for getting the OTP for a new connection. We received the OTP.

So far, 168 members applied, of whom only 45 got the OTP for the new connection, but the rest didn't receive OTP. We go 2 km far to the government water pump to fetch water or else we have to buy water cans. The poor people are facing a lot of problems as they don't have enough money to buy the water can daily; so, they go all the way to the water pump in this scorching heat.

"Our intentions are not to defame any party. It's just that the government should look into this matter and get us out of it. The poor are suffering the most and we can't see their agony," added Vijyalakshmi.