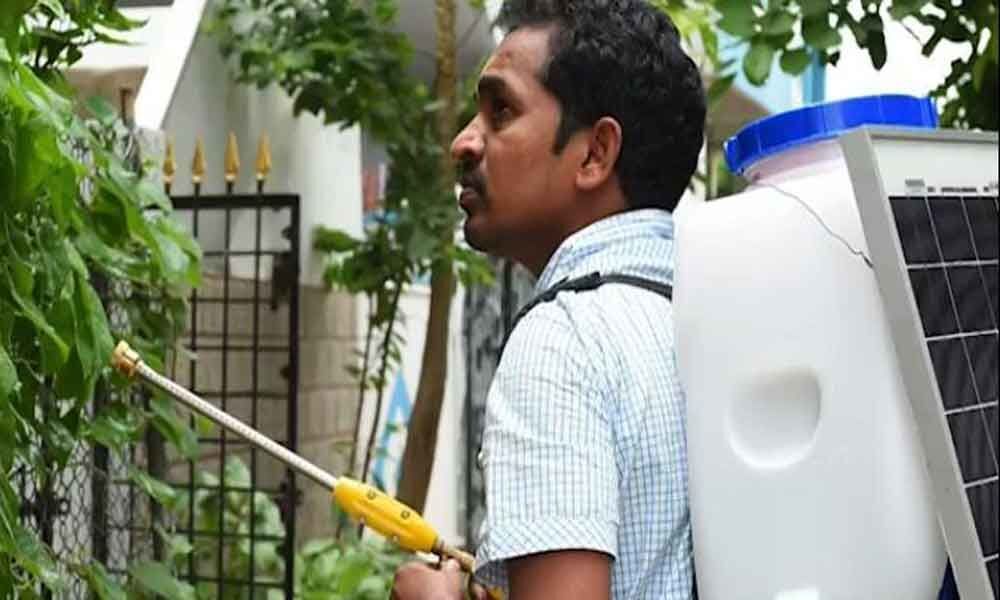 Mallesh Bommagani, 33, is like any other man of his age, grappling with life to make ends meet, but thanks to his scientific bent of mind and an...

Hyderabad: Mallesh Bommagani, 33, is like any other man of his age, grappling with life to make ends meet, but thanks to his scientific bent of mind and an appetite to try his hands at electronics. He made several innovations, but the closest to his heart is the remote that he developed to turn on fans and tube lights. Born in the small village, Arjimpet of Motkuru mandal in Nalgonda, Mallesh is a school dropout.

His mother, a paralytic, had to lie on bed whole day and is even unable to turn on the fan. His sisters were married and live with their husbands. Mallesh says, "My father and I had to go for work and return only at nights. I was not happy to watch my mother stay in the dark and decided to do something for her."

At the time, Mallesh was undergoing training in a local electronic repair shop. With the knowledge he gained by repairing electronics devices, Mallesh started to develop a remote for his mother to operate fans and lights, and he soon succeeded. "I handed over the remote to my mother and asked her to operate. Mother was ecstatic; the gadget in her hands was the most precious object in the world for her because it was made for her and for her alone," Mallesh recalls.

Mahesh has sold over 5,000 remotes across the state since then. There has been no looking back for the innovator who is from a farming background. He, so far, devised over 15 machines to solve various farming problems. He realized he can help farmers reduce their efforts and costs. All his innovations are easy to share between farmers and are of low costs. "I want to expand my business and design more tools and products that would help farmers. I am a farmer too. The plight of farmers is sad. They take huge loans and are uncertain of their end products. So, my innovations are aimed at cutting their costs and increasing the productivity," he says.

Mallesh's first project after undergoing a training program in electronics was to create a device which enabled his paralyzed mother to operate the fans and lights at home on her own without seeking anyone's help.

The farmers who own small pieces of lands and who could not afford to use electric or diesel-run water pumps on a regular basis, Mallesh realised developed a simple pedal pump, the human-powered pump that can pump up to 3,000 liters of water in an hour. Mallesh claims the pump is beneficial to the farmers who own one-fourth of an acre or half an acre of land and could not afford the electricity bills or diesel motors, as they incur running cost of almost Rs 800 a day. The pedal pump came into existence. It can be set up easily and can draw water from a depth of 25 feet and can push water up to 200 feet horizontally. The ease of setting up allows the device to be shared among farmers easily, thereby eliminating the necessity of having to buy multiple pumps.

The solar fertilizer sprayer, which enables farmers to distribute fertilizers evenly across the fields with minimal efforts, is another useful innovation that has won multiple awards for him. The power generated by the solar panel on this device can also be used to power an LED bulb to illuminate a house during power cuts. According to Mallesh, each farmer spends about Rs 1,000 on diesel and petrol in a day to spray pesticide for five acres. Annually, they need to spend Rs 18,000 to Rs 20,000 towards petrol and diesel, whereas with his device, the farmers just need to invest Rs 5,000 once and reap the benefits forever. He saw massive sales with his solar-powered pesticide sprayers, selling over 3,000 units.