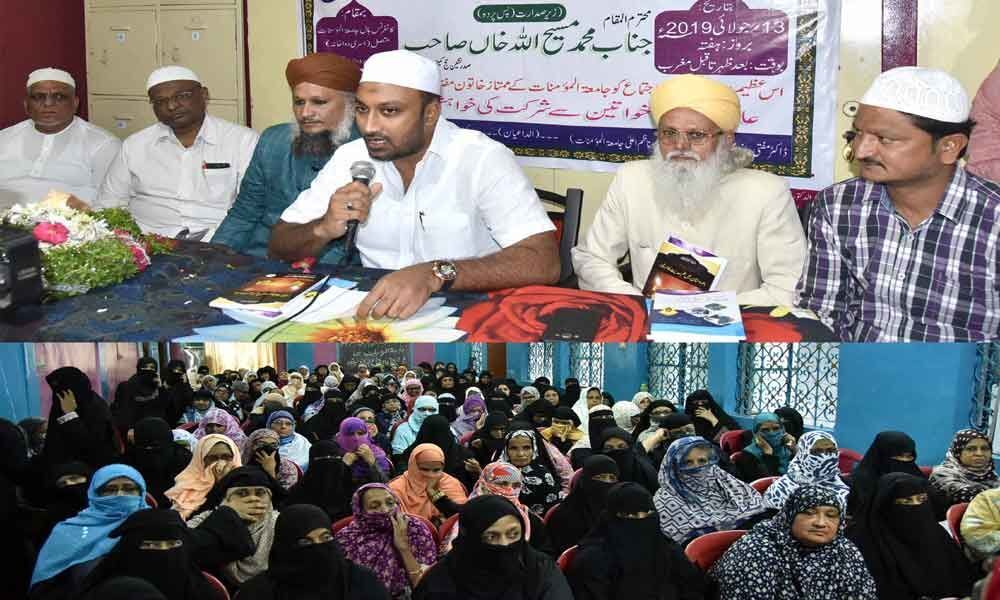 A one day Haj Tarbiyati Ijtema (Training camp) for women was organised at Jamiat ul Mominath in Moghalpura at seminary’s conference hall on Saturday. This was the first time that a training camp was organised specially for women.

The programme started with the recitation of Quran and hamd-o-naat (hymn in praise of Allah and Prophet Muhammad). The chief guest of this programme, Mohammed Masiullah Khan, chairman of TS Haj committee, addressed the women pilgrims. He said this was the first time such a unique training camp for women Haj Pilgrims in Telangana state was being organised.

He felt that this was an opportunity for women who gathered at Jamiatul Mominath and taking part in the camp to clarify all kinds of doubts, as women Muftiyas (Women Islamic Scholars) were taking questions from those who were about to embark on an pilgrimage for the first time.

"This is women-only camp, where a woman can freely ask questions and seek guidance from women muftiyas about important issues related to women. Haj is one of the five pillars of Islam which is done one in a lifetime so all pilgrims including women has to know all the rituals to be performed during Haj," he felt.

In this programme, women muftiyas interacted with women and clarified their apprehensions. Dr Muftiya Rizwana Zareen, Principal Jamia tul Mominath explained about different rituals to be performed during the visit and stay in the second holiest city of Madina, where holy mosque of prophet Mohammed is situated.

Dr MuftiyaTehminaTehseen explained about the values and virtues of performing Haj, while Dr Muftiya Nazima Aziz elaborated on how to do all the rituals while performing haj (step by step).

Guest of the programme, Alhaj Afareeda Banu provided insight about the whole journey of Haj and how to deal with things which a pilgrim may face during the course of journey and while performing Haj. Later, the women scholars interacted and answered the questions from women pilgrims and allayed all their doubts about performing the Haj.