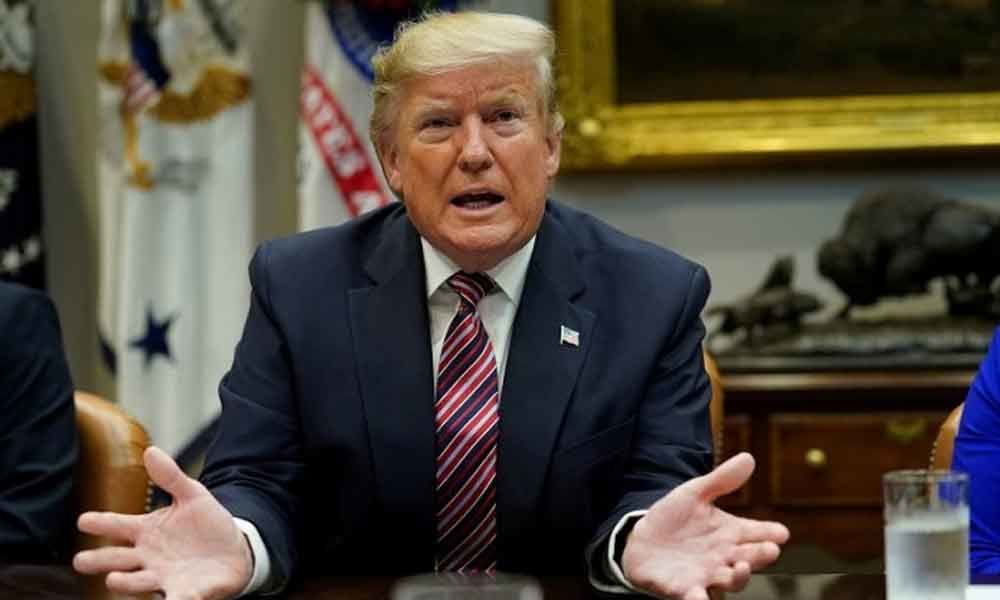 Washington: Republican Donald Trump is this week likely to become the third US president to be impeached when the Democratic-led House of Representatives votes on charges stemming from his effort to pressure Ukraine to investigate political rival Joe Biden.

Trump faces one charge of abusing his power by asking Ukraine to investigate Biden, a leading Democratic contender to oppose him in the 2020 US presidential election, and one of obstructing Congress' investigation into the matter.

The House is likely to take up impeachment on Wednesday, setting the stage for a vote this week on whether to approve the charges and send the matter to the Republican-led Senate to hold a trial on whether to remove Trump from office.

Democrats, who enjoy a 36-seat majority in the House, are expected to win an impeachment vote, which requires a simple majority.

Republicans hold 53 of the 100 seats in the Senate, where they appear likely to prevail in any trial against Trump, which would require a two-thirds majority of those present to remove him from office.

Schumer made his appeal in a letter to Republican Senate Majority Leader Mitch McConnell, who said last week he was coordinating with the White House and has raised the prospect of a short impeachment trial in which no witnesses would be called.

"I hope we can come to an agreement about a fair trial," Schumer told MSNBC in an interview on Monday.

House Democrats also sought testimony from the four men in their inquiry, but they did not appear.

The House Judiciary Committee voted 23-17 on Friday along party lines to approve the two charges against Trump and to send the matter to the full chamber. Late on Sunday, the panel issued its full report detailing the case against him.

In a tweet on Monday, White House spokeswoman Stephanie Grisham said Schumer's comments seeking fairness were "laughable" after the release of the 658-page report "in the middle of the night. Thankfully the people of this country continue to see the partisan sham that this is."

A McConnell spokesman did not directly address Schumer's requests, but said the Senate majority leader "plans to meet with Leader Schumer to discuss the contours of a trial soon."

No US president has been removed as a direct result of impeachment.

Richard Nixon resigned in 1974 before he could be removed, while Andrew Johnson and Bill Clinton were impeached by the House, respectively in 1868 and 1998, but not convicted by the Senate.

Senior House Democrats expect to win any impeachment vote, albeit with the possibility of some defections from moderates facing tough re-elections next year in Trump-leaning districts.

Representative Jeff Van Drew, a conservative Democrat from New Jersey who opposed impeachment, is planning to become a Republican, media reported over the weekend. The news prompted a mass resignation of staffers in his office.

In congressional hearings, Democrats have accused Trump of endangering the US Constitution, jeopardizing national security and undermining the integrity of next year's US presidential election by asking Ukrainian President Volodymyr Zelensky in a July phone call to investigate Biden and his son Hunter Biden, who was on the board of a Ukrainian gas company.

Democrats argue impeachment is an urgent necessity because Trump has continued his alleged misconduct, endangering the integrity of the 2020 election.

Republicans have defended Trump and accused Democrats of a partisan effort aimed at overturning his upset 2016 victory over Democrat Hillary Clinton. Trump has branded the entire impeachment drive a sham.

"READ THE TRANSCRIPTS! The Impeachment Hoax is the greatest con job in the history of American politics!" he said in a tweet on Monday.

Trump has alleged the Bidens were involved in corruption in Ukraine and should be investigated there, but has offered no evidence. Biden, a former US vice president, has denied wrongdoing

US: Malaria medicine being administered

Modiji, we are going to die, A Bihar nurse's plea

Why are all wives getting pregnant?