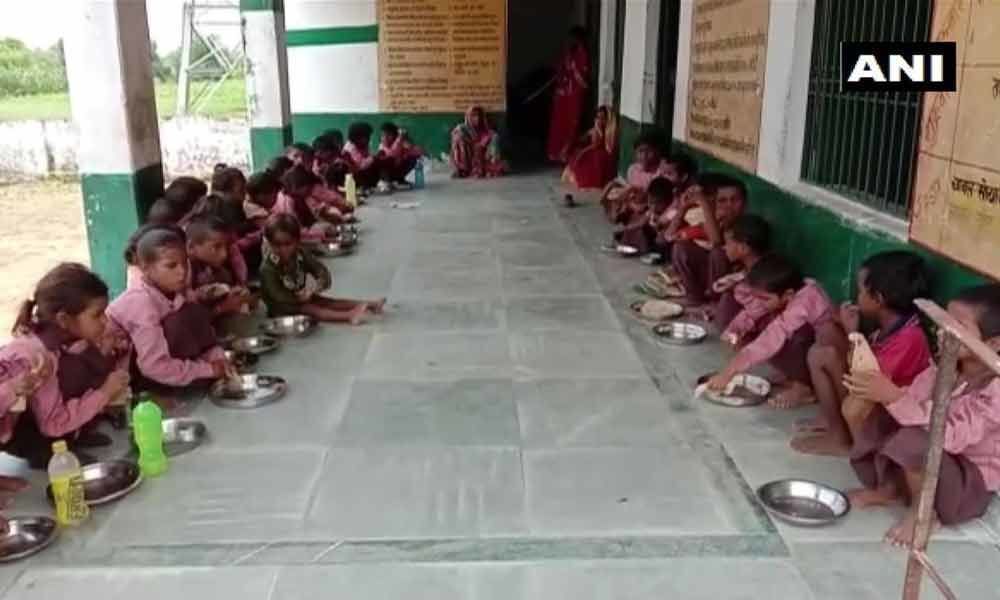 According to the website of state Midday Meal Authority, the overseeing body for these meals in the state, government-run schools list an elaborate menu that is supposed to be served to children.

MIRZAPUR (UP): Students of a government primary school in Mirzapur district of Uttar Pradesh are being served salt and roti (flatbread) under the midday meal scheme.

The midday meal scheme is designed to provide proper nutrition to scores of children from poor families who study in government schools across the country.

A video posted on social media shows children sitting on the floor of the school corridor, eating rotis with just some salt in their plates.

According to the website of state Midday Meal Authority, the overseeing body for these meals in the state, government-run primary schools list an elaborate menu that is supposed to be served to children.

It includes pulses, rice, rotis and vegetables. Fruits and milk are included on certain days, according to the meal chart.

That's roti with table salt for midday meal in a government school. Now one may argue the veracity of this video, but 4 things they can't refute:

It IS roti and salt.

The venue IS a school.

Speaking on condition of anonymity, a parent told IANS: "Children get either roti-salt or rice-salt on most days. Milk is given very rarely and proper food is served only when some important person comes for a visit."

District Magistrate Anurag Patel said: "I have got an inquiry conducted and the incident has been found to be true. Prima facie, it is the fault of the teacher-in-charge of the school and the supervisor at the Gram Panchayat. Both have been suspended."

Mirzapur: Students at a primary school in Hinauta seen eating 'roti' with salt in mid-day meal. District Magistrate Anurag Patel says, "negligence happened at teacher & supervisor's level. The teacher has been suspended. A response has been sought from supervisor" pic.twitter.com/i8rgtJO5xc

The Uttar Pradesh government spokesman said that it is providing midday meals in over 1.5 lakh primary and middle schools across the state. Over 1 crore children are supposed to benefit from the scheme.

According to the Centre, the midday meal scheme is designed to provide a minimum of 450 calories per child per day, which should include at least 12 grams of protein each day too. These meals should be served to each child, at least, 200 days a year.