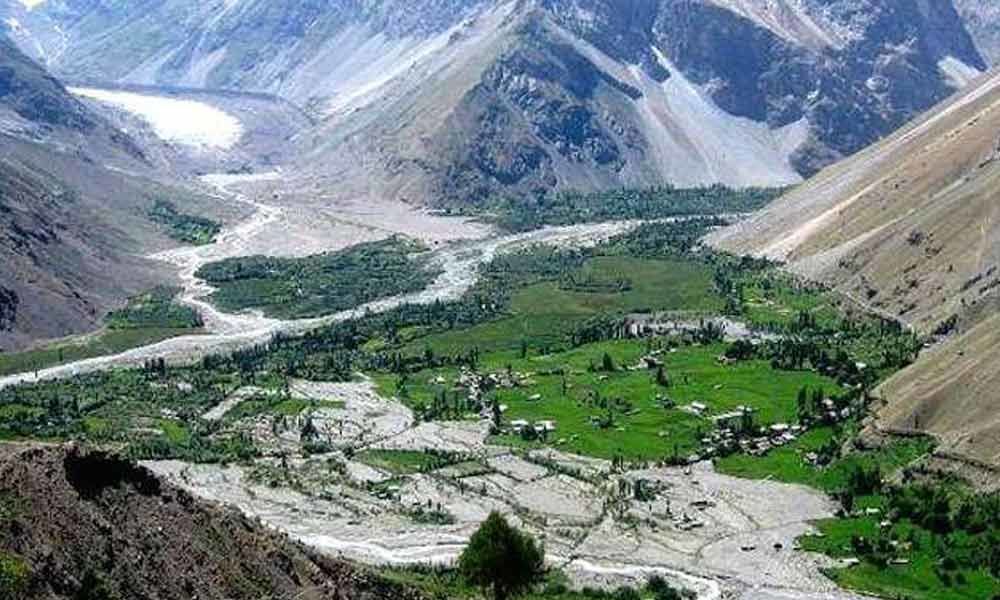 Even as Pakistan's Prime Minister Imran Khan expresses solidarity with the people of Pakistan-occupied Kashmir (PoK) and Gilgit-Baltistan (GB), the reality on ground zero is contrary to Khan's much-hyped claims on camera.

New Delhi, Aug 17 (IANS) Even as Pakistan's Prime Minister Imran Khan expresses solidarity with the people of Pakistan-occupied Kashmir (PoK) and Gilgit-Baltistan (GB), the reality on ground zero is contrary to Khan's much-hyped claims on camera.

At the behest of the Federal government in Islamabad, Chinese companies are reportedly plundering natural resources in the Gilgit-Baltistan region which includes precious metals like gold, platinum, cobalt and precious gemstones like Topaz and Aquamarine.

Exploitation of natural resources at a large scale has resulted in widespread public protests recently across GB, an Indian territory, part of greater Kashmir region, forcibly occupied by Pakistan.

Several leaders, including Shaukat Kashmiri and Mumtaz Khan, who voiced their concern over Pakistan's decision to allot mining contracts to foreign companies, were either jailed or driven out of PoK.

In a three-year research project on the strategic region of PoK conducted by India's top think tank, Institute for Defence Studies and Analyses (IDSA), it has been revealed that enormous wealth plundered by foreign companies in GB did not accrue to the local populace.

"Precious minerals, gems, metals and even uranium found in the Baltistan area were exploited. However, the revenues were not shared with the local government, igniting widespread protests in GB," said Ashok Behuria, an expert on PoK associated with the project.

Behuria said that whenever there was unrest in GB, Chinese authorities became nervous.

"The reason is that in recent years, China has made huge investment in mining projects in Baltistan. The GB region also provides key strategic connectivity to the China-Pakistan Economic Corridor (CPEC) project, making Beijing obsessed with this territory," Behuria told IANS.

Based on its in-depth research, the IDSA has recently published a book on PoK, authored jointly by its three senior analysts, Surinder Kumar Sharma, Yaqoob ul Hasan and Behuria.

Having experience of more than three decades of research on the strategic GB region, Surinder Sharma said that on the one hand natural resources in Baltistan are being looted by the government, while on the other the entire region is being neglected by the government.

"No wonder, GB is one of the poorest regions in Asia where around 85 per cent of people live on subsistence agriculture," Sharma told IANS.

IDSA's research says the Pakistan Mineral Development Corporation estimates that there are 1,480 gold mines in GB, out of which 123 contain superior quality of gold, compared to the gold mines in South Africa. Despite having superior quality gold, the region did not benefit as companies which were issued mining licences operated like a mafia syndicate.

The critical research, published in the form of a book, reveals that during the regime of General Pervez Musharraf, mining licences were issued to 20 multi-national companies. To oblige Beijing, the Pakistan government obliged several Chinese companies to exploit natural resources in GB. The local Gem Association had opposed the government's move citing that the decision would deprive local residents of their resources.

But for the Pakistani establishment, their all-weather friend China is more important.

Such mining contracts were gifted to oblige China, said Sharma, adding: "Pakistan has double standards on PoK. On the face of it, it alleges that India should not have revoked special status of Jammu and Kashmir, while on the ground Pakistan blatantly plunders natural resources of the Gilgit-Baltistant region, abusing the basic rights of the local people."