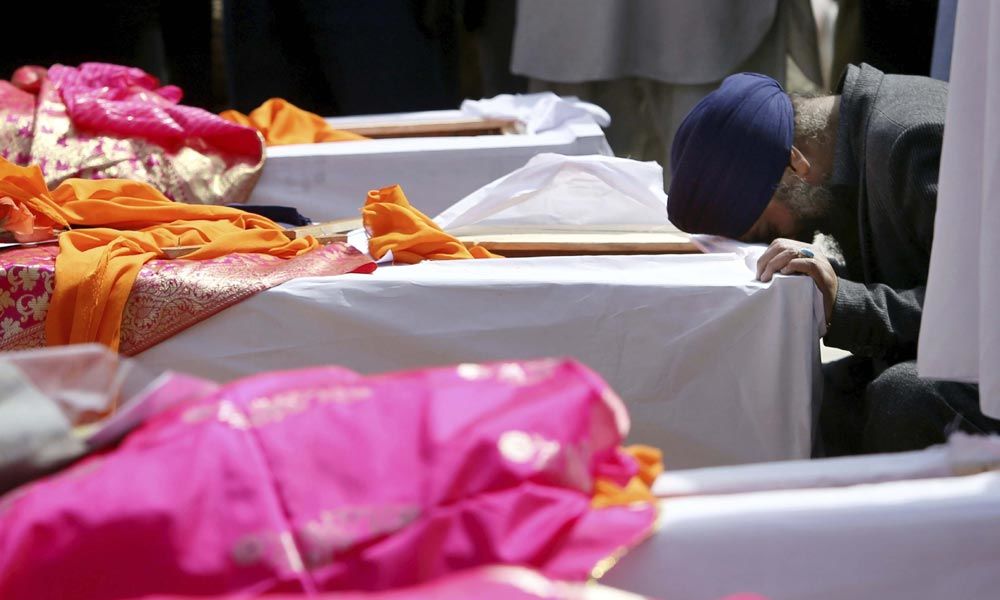 Afghan Sikh man mourns over a coffin during a cremation ceremony in Kabul, Afghanistan on Thursday
Highlights

Kabul: 'They killed everyone, no one is left alive,' Apar Singh succinctly sums up the horrific attack carried out by a lone terrorist, believed to bel...

Kabul: "They killed everyone, no one is left alive," Apar Singh succinctly sums up the horrific attack carried out by a lone terrorist, believed to belong to Pakistan-based Haqqani group, on a prominent Sikh gurdwara here that killed at least 25 worshippers.

The over two dozen worshippers were killed and eight others injured when a heavily armed suicide bomber stormed a prominent gurdwara on Wednesday in the heart of Afghanistan's capital of Kabul, in one of the deadliest attacks on the minority Sikh community in the strife-torn country. Some of the Afghan Sikhs, who lost their entire family members in the attack, are wondering what "sin" they have committed to deserve such a fate, TOLOnews reported. Many of the injured from Thursday's attack were rushed to nearby hospitals by security and by local authorities.

A number of families of the victims of the attack described the attack as a clear crime "against humanity," the report said. Recalling the brutality, one man, who lost seven members of his family in the attack, says a suicide bomber fired at a man, woman and a child and "showed no mercy to anyone." One of the men who lost his mother in the attack asked: "what was my mother's sin and why are the country's minorities being targeted like this?". "Come and slaughter us if we harmed any Muslim," said one of the victim's relatives. "What is our sin? Come and tell us about our sins. If we have done anything to Muslims?" asked other relatives of the victims. Harwinder Singh, who lost all seven members of his family, said the attackers killed all his family members in front of his eyes.

"They (attackers) killed my mother and my wife with my small child with bullets in front of my eyes,"Singh said. "They killed everyone, no one is left alive," said Apar Singh, another victim. A woman, who has been transferred to the hospital for treatment after she was wounded, said there was no news of her family members who had come for prayer. "All of our youths were killed, what should we do with the children that are left from the attack?" asked a wounded person. The brutal attack on the minority Sikh community has sparked anger among Afghan residents. "The attack showed that they (attackers) don't have any mercy on anyone and they are not obeying any law nor any religion," said Mohammad Mustafa, a resident of Kabul. "They don't care about Muslims nor Hindus, it means humanity does not have any meaning for them," said Haroon Rasouly, another resident of Kabul.

The attack has faced severe condemnation from both inside and outside the country. Prime Minister Modi said on Wednesday that he was "saddened" by the attack on the gurdwara when 150 worshippers were inside the building. "I am saddened by today's terror attack at Gurudwara in Kabul. I express my condolences to the families of all the deceased," he said in a tweet.