Completely unacceptable: Jaitley hits out at Omar for his two PM's in J&K 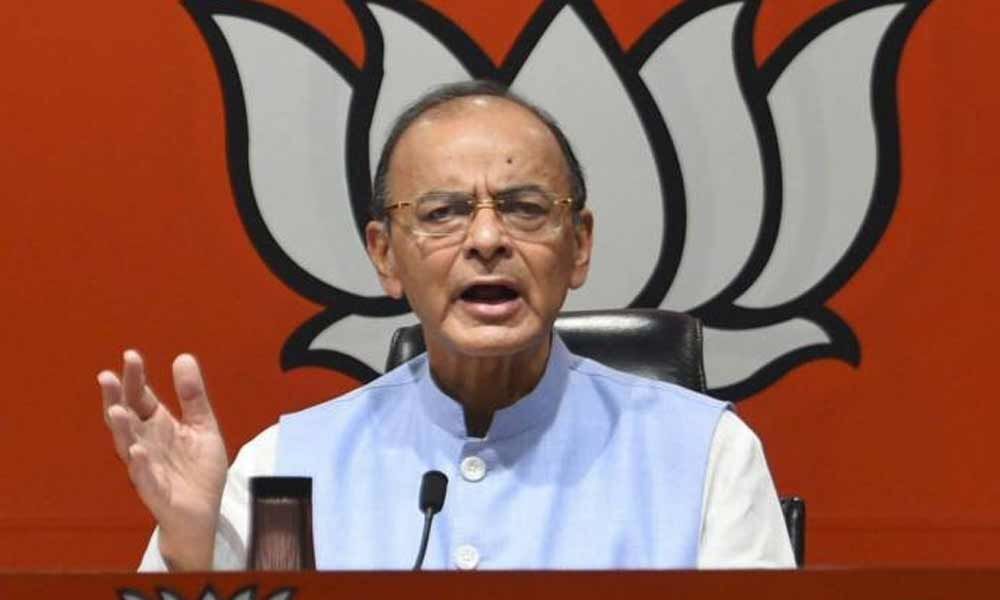 Union Finance Minister Arun Jaitley on Monday hit out at former J-K Chief Minister Omar Abdullah for demanding to revive the post of Wazir-e-Azam and Sadar-e-Riyasat in Kashmir, saying that New India would never allow this to happen

New Delhi: Union Finance Minister Arun Jaitley on Monday hit out at former J-K Chief Minister Omar Abdullah for demanding to revive the post of Wazir-e-Azam and Sadar-e-Riyasat in Kashmir, saying that New India would never allow this to happen.

In his blog, Jaitley wrote: "The National Conference president's statement today that we will demand the revival of the post of Wazir-e-Azam and Sadar-e-Riyasat is only intended to create a separatists psyche. Little do these demandeurs realise how much they are hurting the country as also their own people. The new India will never allow any government to commit such blunders."

In a veiled attack on the PDP and the National Conference, Jaitely said: "The two mainstream parties in Kashmir are increasingly losing their identity. The separatists and the terrorists want a part of the State to segregate from India. India will never accept this. It has already given a loud and clear message both to the separatists/ terrorists and Pakistan that 'Azadi' is not a distant possibility. It is an impossibility."

"The statement of the two parties that the Constitutional link between the State and the country is based on the solemn assurance of Article 35A. If there is no Article 35A, it will break the link. Some have even gone further and argued that two Constitutional provisions constitute the revocable link, which has to be maintained."

The Union Minister termed the argument as completely unacceptable.

"The argument is completely unacceptable. Article 35A was not there in 1947 when the Instrument of Accession was signed in the month of October. In 1950, when the Constitution came into force, it was not there. It was only surreptitiously inserted in 1954. How can it be the essential Constitutional link? The challenge is being heard by the Supreme Court," he said.

"Why intimidate the Court, which is hearing the matter. History is never reversed by the Court judgments. The argument of revocability is as absurd as a suggestion that if the Indian Independence Act was revoked by the British Parliament, we will lose our Independence," added Jaitely.

Abdullah earlier in the day had said that he would like to bring back the posts of 'President' and 'Prime Minister' for the state of Jammu and Kashmir. On Saturday, PDP chief Mehbooba Mufti had warned the Centre if Article 370 is scrapped, the relationship with the state will cease to exist.

"If you break that bridge (Article 370)... Then you will have to renegotiate the relationship between India and Jammu and Kashmir. There will be new conditions... A Muslim majority state, would it even want to stay with you? If you scrap Article 370, your relations with Jammu and Kashmir will be over," Mufti had said.