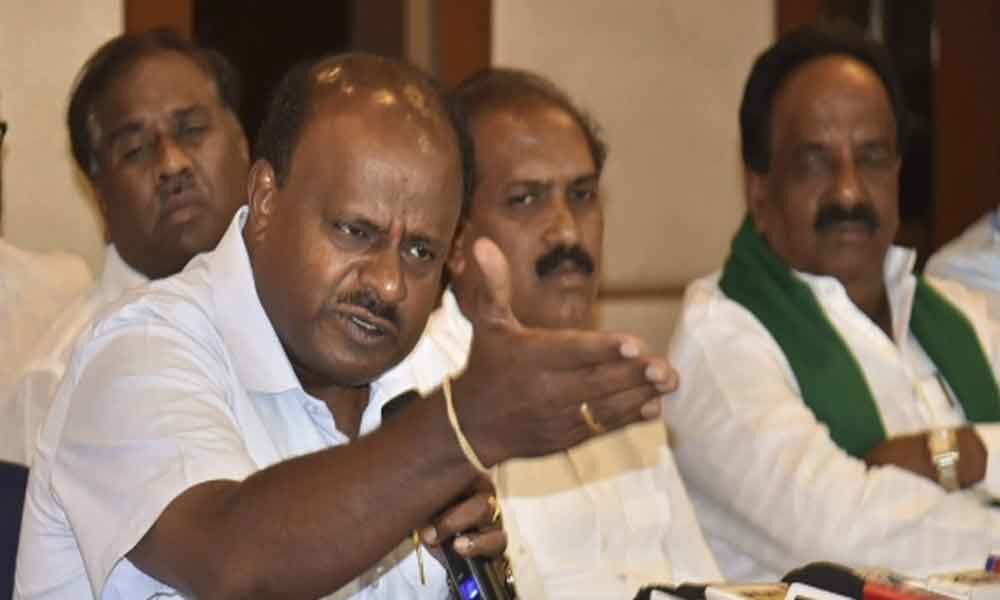 Continuing his tirade against the Prime Minister, Kumaraswamy accused Modi of twisting his comments on the Pulwama terror attack.

"Around 78 lakhs (rupees) was recovered from one BJP leader in Karwar. Where did this money come from?" he asked.

Kumaraswamy further said that he does not need to take lessons from Modi on patriotism.

Kumaraswamy's comments come after Modi slammed Congress and JD(S), which are in a coalition in Karnataka, over the February 26 Balakot air strike, accusing the two parties of misleading the people by "calling Balakot as Bagalkot".

"Modi says I am not patriotic. I don't need to learn patriotism from Modi. When Deve Gowda was the Prime Minister, there was not a single blast in Kashmir. That is our heritage. So do not brand me, you have no right," Kumaraswamy said.

"In speech after speech, he (Modi) talks about Balakot strikes. He says Pakistan is quaking. We know that Karnataka does not border with Pakistan. He (Modi) went to Pakistan and god knows what all he promised there", he added.

On Thursday, while mentioning the Balakot air strike, Modi had said: "We had attacked terror camps in Pakistan. But some here were crying (for proof). Some people had even said that it was an attack in Bagalkot and not Balakot. Is your vote bank in Bagalkot or Balakot?"

Responding to a question on whether BJP leader Jagadish Shettar's reported remark that he wanted to bring Gowda's wife Chennamma into politics, Kumaraswamy termed it as "weird" and something which "pained him".

"Jagadish Shettar said something which has pained me. He said Deve Gowda wants to bring his wife into politics. This is weird. She is not political. But she has worked for the poor in her 80 years of life with no political ambition," he said.

Continuing his tirade against the Prime Minister, Kumaraswamy accused Modi of twisting his comments on the Pulwama terror attack.

"Modi said I shed tears for Pakistan. That is untrue. I shed tears when I saw the state of affairs in the house of a martyr (who died in Pulwama attack). He twisted even that. He called me a traitor because he wanted to hurt my sentiments," the Karnataka Chief Minister said.

"What wrong did I say when I stated that some of the soldiers come from poor families? Not all make it to be Generals and not all are from well off families. Is it so difficult for Modi to understand?" he said.

Kumaraswamy was referring to the comments he had made in a public gathering in Madduru on April 12, where he came down heavily on Modi for "politicising" the sacrifices made by the armed forces.

"Those who safeguard the borders are not children of rich people. They are children from poor families who cannot afford two square meals. However, here is a Prime Minister who politicises their ultimate sacrifice," he had said in the rally.

Asserting that he does not do "politics" like Modi, Kumaraswamy accused the BJP of not letting the government function smoothly.

Further taking a swipe at Modi, Kumaraswamy said, "I have waived off farmers' loans. As a Prime Minister, you should not speak like that (JD-S and Congress have not done anything for farmers). I do not speak lies like Modi."

Kumaraswamy also blamed media for giving more importance to Sumalatha Ambareesh, who is an Independent candidate supported by BJP.

Out of 28 Lok Sabha seats in Karnataka, 14 constituencies went to polls during the second phase of general elections on April 18.

The remaining 14 seats will go to polls in the third phase on April 23. Counting of votes will take place on May 23.