If a government is nationalist, it should stop talking about Pakistan in rallies: Priyanka Gandhi 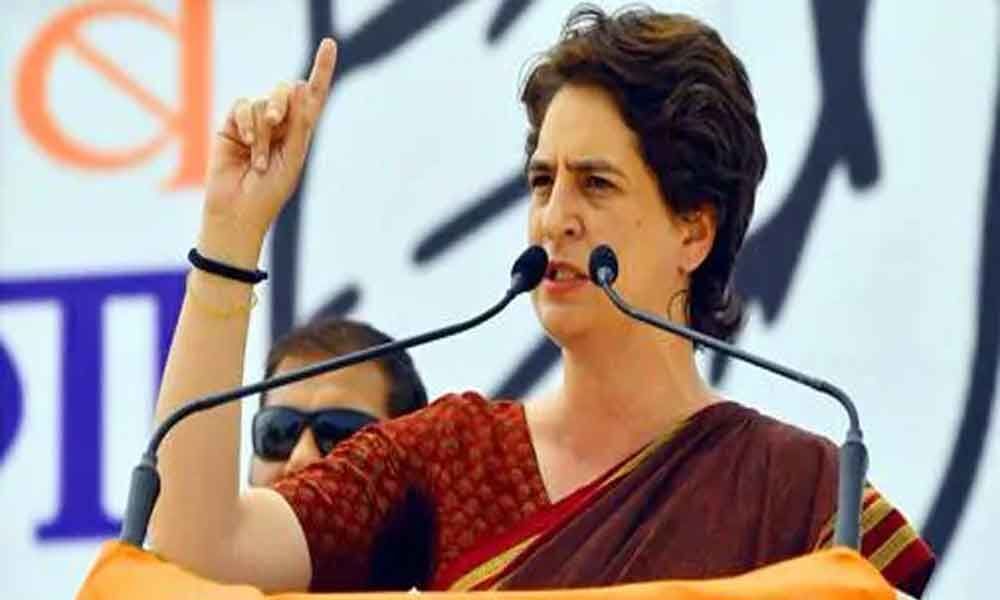 Making another poll promise, Rahul said that Cong will present a separate budget for farmers if voted to power.

Fatehpur Sikri: Priyanka Gandhi Vadra, Congress general secretary in-charge of eastern Uttar Pradesh, came down heavily on the BJP-led central government and said if it is nationalist, it should stop disrespecting the freedom fighters who laid the foundation of this country.

"Government says it is nationalist. I want to ask the government if it is nationalist then it should respect the fallen soldiers, whether they are Hindus or Muslims. If it is nationalist, it should stop disrespecting the freedom fighters who have laid the foundation of this country," Priyanka said while sharing the stage with Congress president Rahul Gandhi and general secretary Jyotiraditya Scindia at a public rally here.

She added, "If it is nationalist, it should stop talking about Pakistan in the election rallies. Instead, it should tell the youth, women and farmers of India as to what it is going to do about them."

She mentioned in her speech about farmers from different parts of the country marching to Delhi and slammed the government for not heeding to their demands.

"It feels as if this government is neither proud of democracy nor our institutes nor people of the country. If it is a real nationalist then it would have been on the path of truth. But, it drifted away from it long ago", she added.

Priyanka, who attacked BJP by accusing it of running fake campaigns, said, "I have realised the truth of this so-called development which is being heavily advertised by the government. People know the farce of these advertisements. But whenever people raise questions, they are called anti-national."

She also had a slip of the tongue while mentioning about the announcements made in the party's manifesto but quickly rectified it. "We have many schemes in the manifesto through which you will get health free in government hospital...I mean not health but the health diagnosis and treatment will be free..." she said.

Later addressing the same rally, Congress president Rahul Gandhi also raised questions over publicity campaigns being carried by the government and asked about the source of money for the campaigns.

"I tell you from where this money is coming from. Narendra Modi has looted crores of your money and has given to all 'chors' (thieves). Nirav Modi, Vijay Mallya, Mehul Choksi, Lalit Modi and Anil Ambani were all given stolen money," he claimed.

Making another poll promise, Gandhi said that the Congress will present a separate budget for farmers if voted to power.

Gandhi said that the money for the party's ambitious NYAY scheme will not come from the middle class but people like "Anil Ambani and Mehul Choksi".

In the manifesto, the Congress, if voted to power, had promised to implement a scheme which will give Rs 72,000 per year to 20 per cent of India's poor.

Eight Lok Sabha constituencies in western Uttar Pradesh went to polls in the first phase on April 11. The state, which has 80 seats, will vote in the remaining six stages of the general elections. Counting of votes will be held on May 23 after completion of polling on May 19.