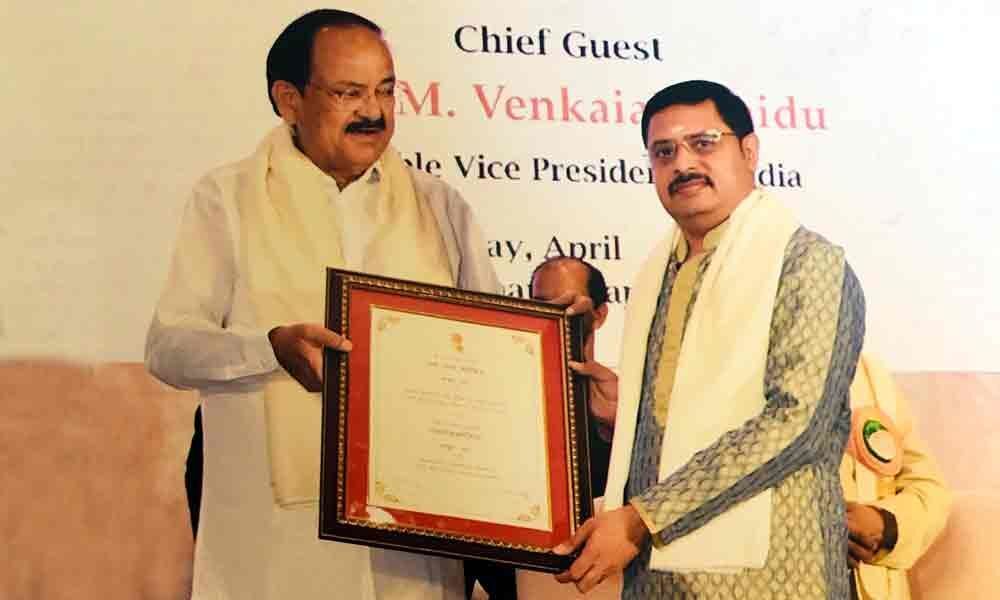 Bangalore: The Vice-President of India, Mr. M Venkaiah Naidu, presented the 'Presidential Award of Maharshi Badrayan Vyas Samman' to Dr.Shankar Rajaraman, the well-known Bangalore-based Sanskrit poet, recently in New Delhi. He was honoured with Rs 1,00,000 Award and a certificate from the Honourable President of India, Mr. Ram Nath Kovind. He was conferred the award for his outstanding contribution in the field of Sanskrit language and literature.The cumulative awards for the years 2016, 2017, and 2018 were conferred by the vice-president under the auspices of Rashtriya Sanskrit Sansthan. The awardees later interacted with the President of India.

The Maharshi Badrayan Vyas Samman, named after sage Veda Vyasa, the illustrious author of Mahabharata, is a Presidential award, instituted by the Government of India in 2002, to honour young scholars, aged 30-45 years, in recognition of their significant contribution to classical Indian languages. The distinction is conferred once a year in recognition of substantial contribution in the field of Sanskrit, Persian, Arabic, Pali, Prakrit, Classical Oriya, Classical Kannada, Classical Telugu and Classical Malayalam. Scholars who have made a breakthrough in inter-disciplinary studies involving contribution of Sanskrit or ancient Indian wisdom to foster synergy between modernity and tradition are especially selected for the award.

Shankar Rajaraman is an allopathic doctor, having completed his MBBS degree from MS Ramaiah Medical College, Bangalore and a post-graduate diploma in psychological medicine from JJM Medical College, Davanagere. He holds a first rank with gold medal in MA Sanskrit from KSOU, Mysore. He completed his doctorate from the National Institute of Advanced Studies (NIAS), Bangalore, on a topic that bridges contemporary psychology and Sanskrit poetics.

Dr. Shankar Rajaraman specializes in a cryptic form of Sanskrit poetry known as "chitra-kavya" (often translated as "wonder poetry" or "pattern poetry"). Two of his famous chitra-kavya works include Devi-danaviyam and Chitra-naishadham. For the former work, he was awarded the Professor M. Hiriyanna Sanskrit Works Award in 2013 by Karnataka Samskrit University, Bangalore. In 2017, he was conferred the Bannanje Award for his contribution to Sanskrit.

On the achievement, Dr Shankar Rajaraman, said: "I am overwhelmed by the recognition from the President of India, Mr. Ram Nath Kovind, and Vice-President of India, Mr. Venkaiah Naidu. It is a tribute to Sanskrit and to the work I have undertaken. I am highly encouraged to do more work and contribute to the spread of the language and literature across the country and the world. We have a very rich heritage in Sanskrit and it is our responsibility to protect this and ensure that its literature and knowledge are passed on to the younger generations."

Apart from composing poetry, Dr Shankar Rajaraman has been translating Classical Sanskrit works to English. Some of these works pertain to Ayurvedic nutrition and dietetics. Others such as Kokila Sandesha ("The Message of The Koel") and Madhura Vijaya ("The Conquest of Madhura") are purely poetic compositions that he has co-translated along with Ms. Venetia Kotamraju. He has also translated some of the compositions of Basavanna, the 12th century social reformer, and KanakaDasa, the 16th century saint-poet, from Kannada to Sanskrit. At present, as a post - doc fellow at NIAS, he is involved in translating a Sanskrit epic poem from 12th century Kashmir. He has also been popularizing classical Sanskrit poetry through social media, especially Twitter and Facebook.