UP HC extends all its interim orders till April 26 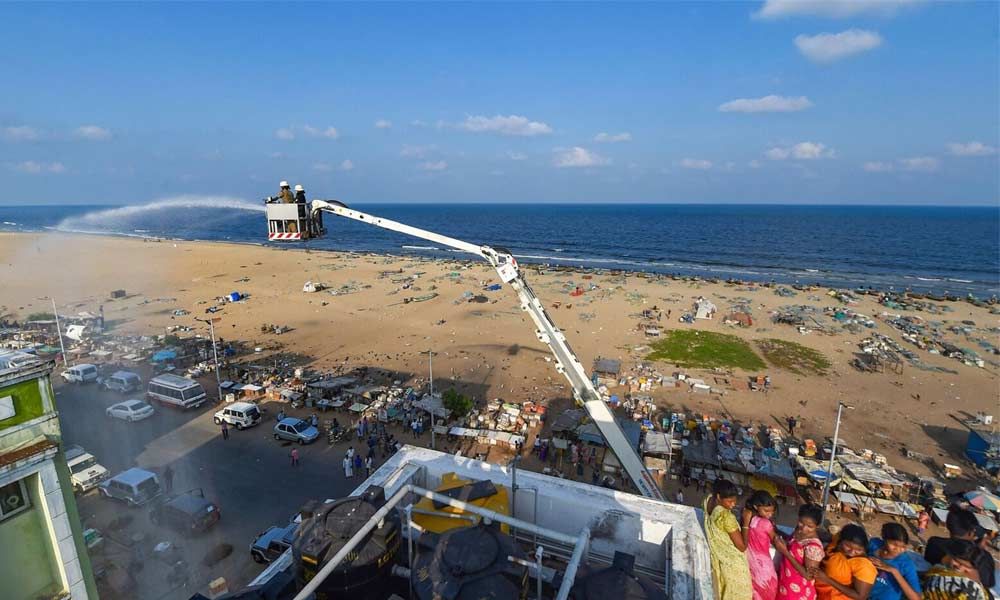 Tamil Nadu fire and rescue personnel spray disinfectant to prevent the spread of coronavirus, during a 21-Day nationwide lockdown, at Tamil Nadu...

Tamil Nadu fire and rescue personnel spray disinfectant to prevent the spread of coronavirus, during a 21-Day nationwide lockdown, at Tamil Nadu Housing Board Quarters, in Chennai on Thursday In a blanket judicial order, the Allahabad High Court on Thursday extended all its interim orders and those passed by its subordinate courts till April 26 amid a near shutdown of the state's judiciary after the nationwide lockdown.

The high court on Wednesday had closed itself down indefinitely along with its Lucknow bench, besides all its subordinate courts and tribunal due to the 21-day lockdown imposed on March 24-25 midnight.

The high court has decided to hear only imminently urgent matters during its shutdown and asked magisterial courts to hear bail and remand pleas as per prevailing arrangements to hear them on holidays. A bench of Chief Justice Govind Mathur and Justice Samit Gopal on Thursday said in all cases, where bail had been granted for a limited period and are to expire during the lockdown, the same would stand extended for a month from Thursday.

The high court also put in abeyance all orders on eviction, dispossession or demolition, passed by any court including the high Court, for a period of one month. While extending the operation of various interim orders, including the grant of interim bail, the bench said due to the nationwide lockdown since March 24-25 midnight, it is difficult for citizens to approach courts. To ensure that citizens are not deprived of their rights to approach the courts, the bench said, all interim orders passed by the Allahabad High Court and its Lucknow bench, besides also those of all district courts, civil courts, family courts, labour courts, industrial tribunals and all other tribunals subordinate to it, will continue to operate up to April 26 if any of these orders has expired after March 19 or is due to expire within a period of one month from March 26. "We, however, make it clear that those interim orders which are not of a limited duration and are to operate till further orders will remain unaffected." the court said.

The court further directed that if criminal courts in the state have granted bail or anticipatory bail for a limited period which are likely to expire in one month from March 26, the reliefs of bail or anticipatory bails will stand extended till April 26. "If an order of eviction, dispossession or demolition has already been passed by the high court or the district or civil courts, the same shall remain in abeyance for a period of one month from March 26," the court said. "Considering the fact that it will be practically impossible for citizens to approach courts for redressal of their grievances for a period of twenty-one days specified in the the Ministry of Home Affairs' order dated March 24, we sincerely hope that the state government, municipal authorities and agencies and instrumentalities of the state government will be slow in taking action of demolition and eviction of persons," the bench ruled.