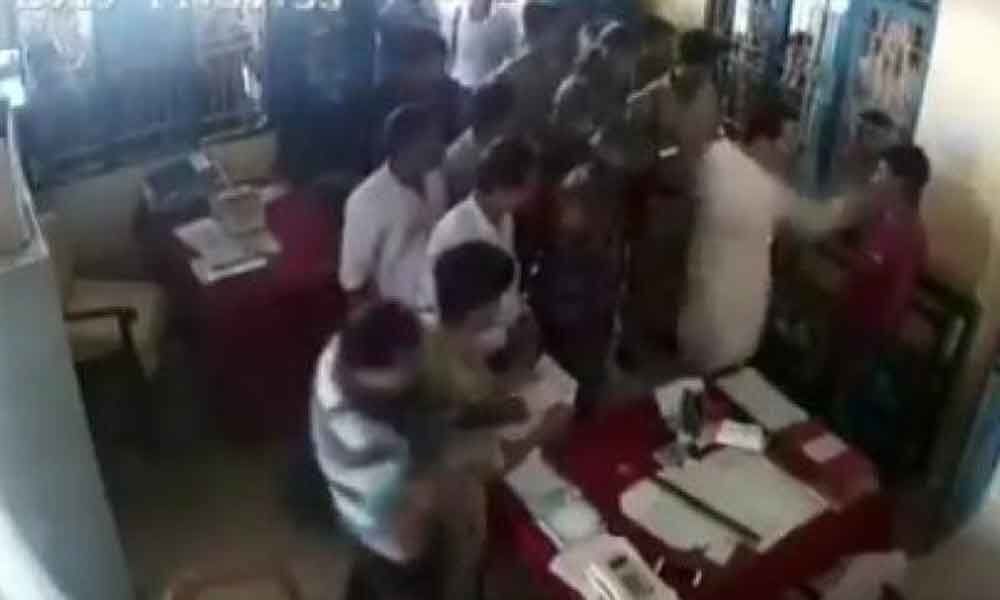 State Law Minister Ratan Lal Nath insisted that 'Pradyot should be punished for taking law in his own hands'.

Agartala: Police have filed a complaint against state Congress unit chief Pradyot Kishore Debburman for slapping a supporter of rival IPFT, who allegedly made an attempt to attack the convoy of his sister and party's Lok Sabha candidate Pragya Debburman, an officer said.

A video showing Debburman assaulting Mintu Debbarma inside a police station in Khowai district, around 50km from here, has gone viral on social media.

Partha Chakraborty, the officer in-charge of the Khowai police station, said a notice will be sent to the state Congress chief in the next two to three days, asking him to appear for an interrogation. As of now, the police are trying to collect evidence in the case, he said.

Debbarma, the IPFT supporter who was at the receiving end, allegedly tried to throw brick bats at the convoy of the party's East Tripura Lok Sabha candidate Pragya Debburman on Thursday. He was taken into custody by the police.

Defending him, Mangal Debbarma, the spokesperson of the IPFT, contended that "Mintu was there by coincidence" and he or the party was not involved in the "attempted attack". The IPFT is an ally of the ruling BJP in Tripura.

Meanwhile, the state Congress chief took to Facebook early in the day to vent his anger. "The Govt has filed IPC Sec 447 (3 months jail), Sec 352 (3 months jail), Sec 323 (1 yr jail), Sec 506 (2 years jail) for retaliating against the man who planned and tried seriously to attack my sister MK Pragya DB alongwith 30 Goons at Tulasikhar, Khowai. I will respond and so will the people who understand the emotions of a brother," he wrote.

Talking to reporters, Debburman also said that he was ready to go to jail. "If they want to put me in jail, let them put me in jail. I shall not seek bail," he asserted.

Slamming the Congress leader, state Law Minister Ratan Lal Nath insisted that "Pradyot should be punished for taking law in his own hands". Polling in East Tripura (ST) constituency is scheduled to be held on April 23.