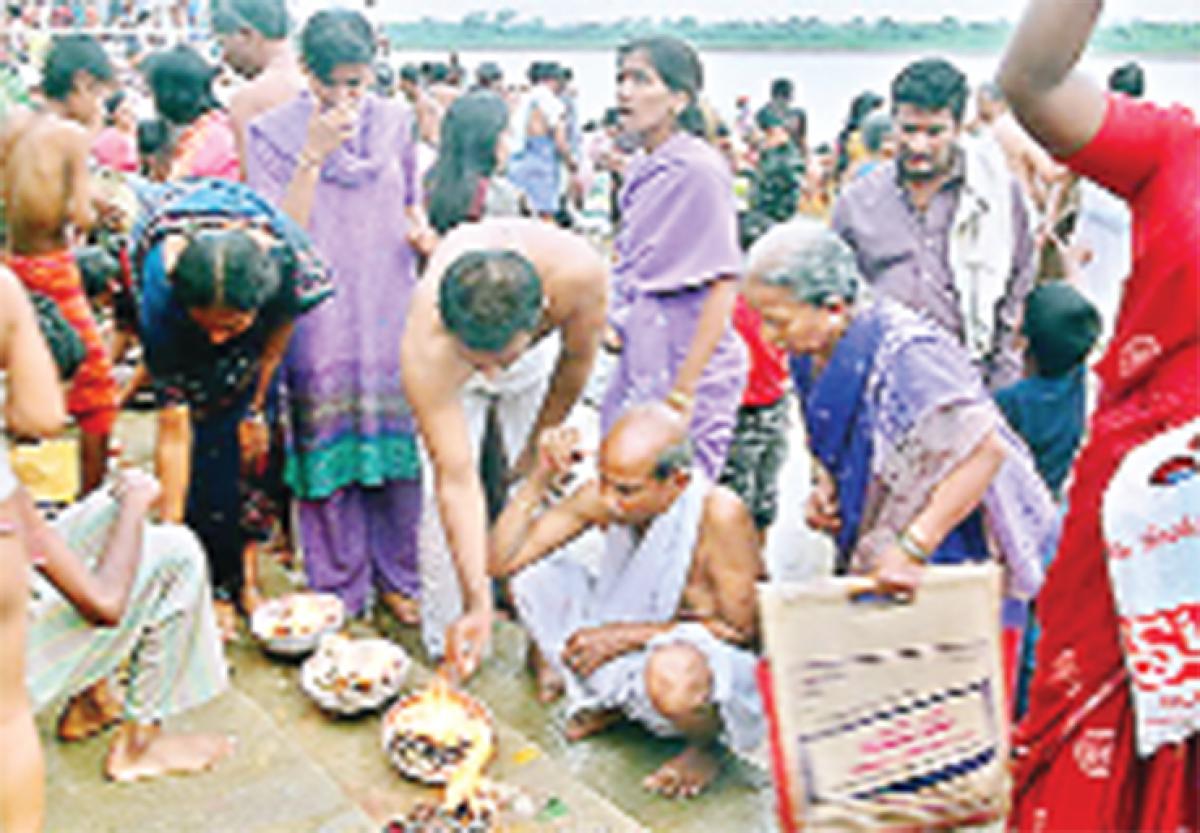 It could well be an embarrassing situation for the lakhs of devotees who turn up at the ‘Godavari Pushkaralu’ in Telangana as they may have to search far and wide for purohits (qualified priests) for performing various religious rituals that should be undertaken during this period specifically.

Telangana devotees likely to face shortage of priests at Pushkaralu

Warangal: It could well be an embarrassing situation for the lakhs of devotees who turn up at the ‘Godavari Pushkaralu’ in Telangana as they may have to search far and wide for purohits (qualified priests) for performing various religious rituals that should be undertaken during this period specifically.

The State government, which was already racing against time to have all arrangements in place for the mega event starting July 14, will have its task cut out when they confront the problem of deploying the priests at Pushkar ghats. Without the presence of adequate number of priests, the very nature of the River Festival is of no significance. It may be noted that Pushkaralu event, which comes once in 12 years where pilgrims take a dip in the river with the belief that they would be relieved from all sins, witnesses rituals such as ‘pinda pradanam’ for the departed souls to rest in peace. The number of priests available in Andhra Pradesh is more than that in Telangana State.

Hundreds of priests from the Andhra region had come to Basar, Dharmapuri, Kaleshwaram, Bhadrachalam and other places where the devotee influx crossed lakhs, during the 2003 Pushkaralu. But this time around, especially with the bifurcation of erstwhile AP, local purohits say that they may not visit Telangana.

Andhra Pradesh has several Veda patashalas and many of the Vedic pundits from Telangana used to go to East Godavari district and get trained as Ghanapatis in the undivided Andhra Pradesh. The chief priest of Sri Sita Ramachandra Swamy temple in Bhadrachalam, Podicheti Jagannathacharyulu, informed The Hans India that the event requires at least 5,000 purohits. “

Even the main temple requires additional 20 to 30 priests to run the rituals during the Pushkaralu,” he said. Basar temple executive officer A Venkataramanamurthy said that the endowments department had made an announcement for the temporary recruitment of purohits only for this event.

Telangana Alaya Archaka Udyogula JAC State convener Gangu Bhanumurthy said that it all depends upon how the government handles the situation. “With limited number of purohits available, the government should assure them of providing lodging and boarding during the event besides leaving the service charges (sambhavana) for the rituals to the discretion of the devotees and purohits.

It is learnt that there are about 3,500 archakas working under the endowments department in the State, while the number of priests working in other temples is around 15,000. It’s hard to expect them to take part in the Pushkaralu as they have to conduct rituals regularly in their respective temples.

Meanwhile, the Assistant Commissioners of Karimnagar, Khammam and Adilabad districts have already issued notification for the recruitment of purohits only for the Pushkaralu event. These purohits will be given ID cards to conduct rituals at Pushkar ghats. However, the endowments department is yet to issue the guidelines for these purohits.