Hyundai clearly has high hopes with the new Elantra. Nothing much explains why the automaker would chose to introduce an all-new product in a 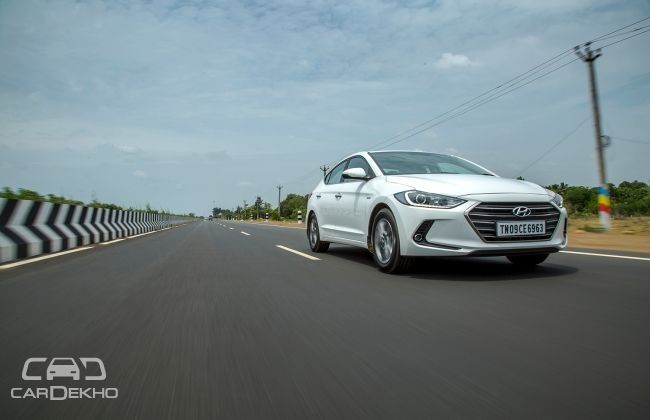 Hyundai clearly has high hopes with the new Elantra. Nothing much explains why the automaker would chose to introduce an all-new product in a dying segment, does it? Like it or not, SUVs and MPVs have trampled the D-segment. And, over the years, the equipment list and level of quality has grown by leaps and bounds and is now on-par with the premium sedans. The only way forward then, is to push the envelope even further. That seems to be the mantra with the new Elantra too. Everything, is just one notch better. 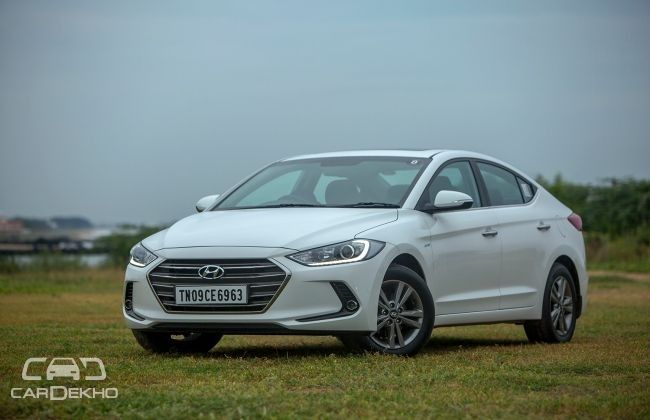 To the untrained eye, the sixth generation of the Elantra might just pass off as a mere facelift of the older iteration. That's not too surprising, as the design does seem like an evolution of the older one and not a radical departure. Hyundai is clearly following a 'if it ain't broken, don't fix it' formula here. The fluidic Elantra had the right amount of pizazz to beat the Toyota Corolla and be the best-seller in its class for a good year. Naturally, messing with that was a no-no. That said, the design has become sharper. 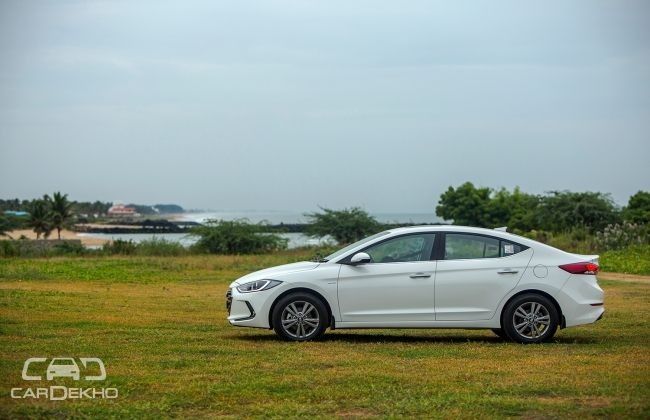 The curves aren't as curvy anymore and the profile doesn't have a ballad of swooping lines dominating it. Is it likeable? Sure. Personally, I'm not a big fan of the new face, but my colleagues seem to love it. It does make a statement, though. The large pulled back headlamps with daytime running lamps and the massive hexagonal grille lined in chrome makes the Elantra look almost European. In fact, our photographer on more than one occasion quipped that it looked like a certain leaping cat, especially because of the way the daytime running lamp was integrated into the face. It also gets a set of projector fog lamps that are housed in a functional vent that creates an air-curtain around the front tyre. Super cool. 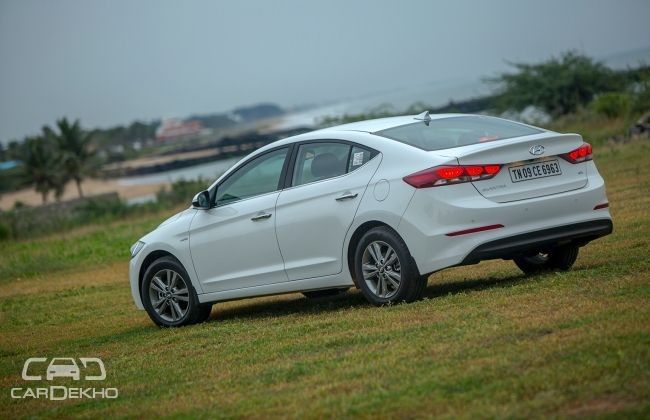 Although the height is nearly identical to the outgoing generation, the rake of the roof seems to be sharper as it dives into the hatch. The coupe-like styling, coupled with the high shoulderline gives it a nice, planted stance. That said, I wish the wheels were one size larger. I'm not too fond of the design either, and would have loved to see the ones from the EU-spec on offer here. But, given the condition of our roads, these 16-inchers feel just right. The rear is where it looks like its predecessor the most, thanks to the signature, three split LED wrap-around tail lamps. Finally, the exhaust tip is now (sadly) hidden away from view. 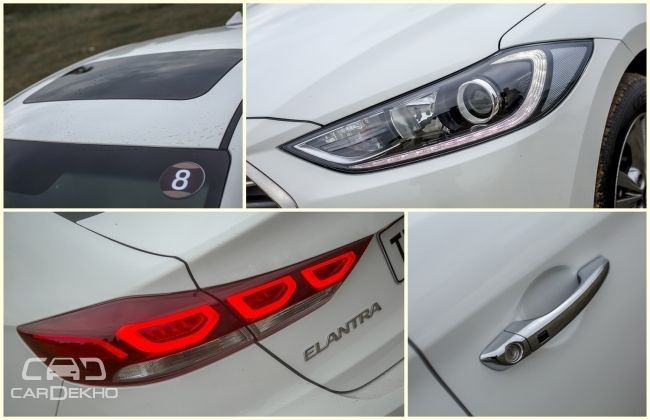 Move towards the door with the key (that weirdly is the exact same unit you get with the Grand i10) in your pocket and the mirrors automatically open up, and a small lamp lights up around the door handle, welcoming you. The design isn't as radical as before here too. For instance the sloping waterfall centre-console has now given way to a conventional and practical layout. The dummy switches around the gear lever do look a tad disappointing, but other than that there's very little that would give you a cause to complain. 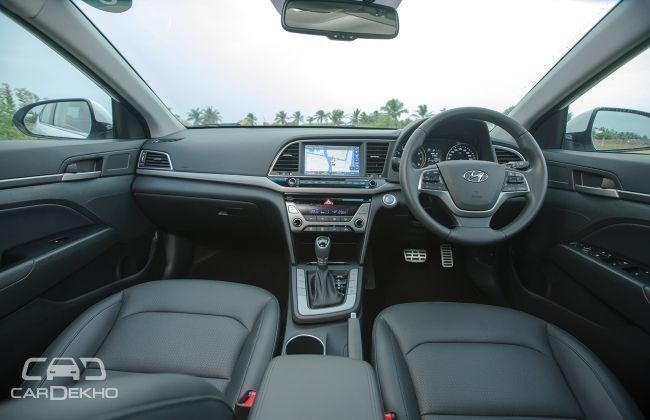 Fit and finish levels have gone a level higher and is almost on-par with its German rivals. The dashbaord uses some soft-touch plastics, the leather wrap on the steering feels soft as the general quality of materials used feels one bit more premium. The cabin is dipped in black, with some subtle dull silver accents thrown in to liven up the place. I'm not too fond of the quality of switches on the steering and the ones that control illumination and traction control (they feel hard and clicky), but everything else looks like it's from the top drawers at Hyundai. 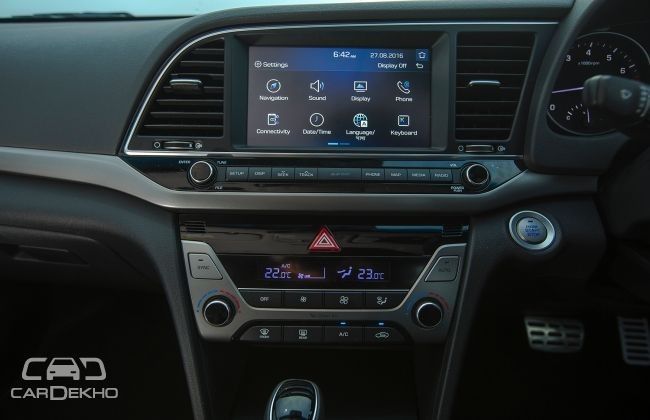 And yes, considering this is a Hyundai, the feature list takes a couple of pages to be listed completely. The top-spec SX (O) AT variant that you see in the pictures gets all the niceties including ventilated seats, leather upholstery and dual-zone climate control. There's an 8-inch touchscreen infotainment system too, that supports Android Auto as well as Apple CarPlay. Paired with a 6-speaker system by Arkamys, the audio is quite nice too. Of course, it doubles up as the navigation and the screen for the reverse camera as well. The Elantra gets a sunroof too, which is reserved for the automatic variants only. 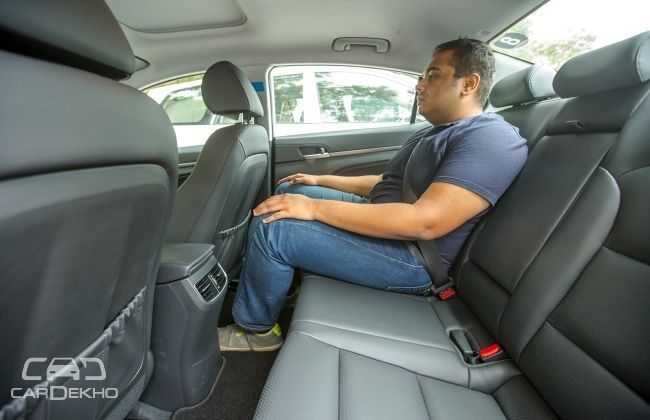 Space is more than adequate, even if you are generously proportioned. The driver's seat gets 10-way power adjust, but no memory unlike the Octavia that not only gets electric seats for the co-driver as well, but also offers memory. Cushioning is soft, side bolstering is ample and there's just the right support for the under thigh too. The rear half of the cabin can accommodate three people, but the one sitting in the centre will find his knees brushing against the seat. There's no dearth of legroom or kneeroom for someone my size (I'm 6ft tall), even with the driver's seat set for my driving position. Headroom is at a pinch thanks to the sloping roof, and the short seat squab means that under thigh support takes a hit as well. 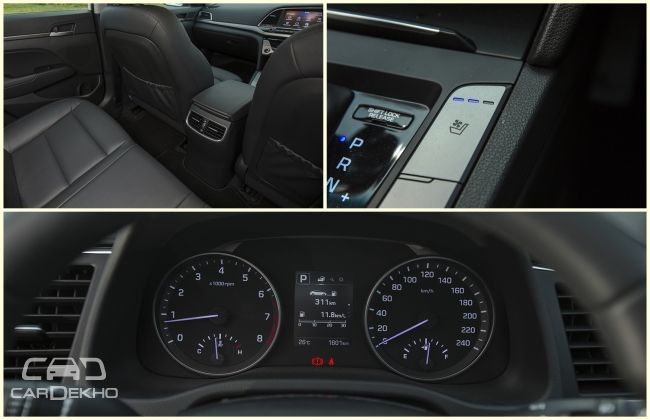 Before I sign this section off, there's one last feature that deserves a mention - the handsfree boot release. Walk to the boot of the locked car with the key in your pocket and it opens itself in three seconds. Pretty nifty if you have your hands full with luggage. 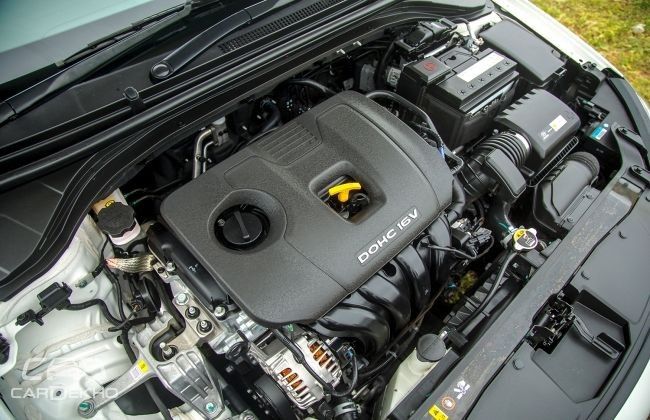 Right, then. Until now, all seems in place. The exteriors look appealing, the cabin is spacious and decked with features and there's a sizeable 458-litre boot too. On the face of it, the Elantra sure looks promising. Now, on to what's entirely new for our market - the 2.0-litre petrol engine. The 4-cylinder motor is the largest engine in its class, but not the most powerful by a long shot. But, the way the engine delivers the 152PS of power and the 192Nm of torque is commendable. There's no surge or gush of torque that hits you in an instant. What you get instead, is a relaxed, linear delivery which gets stronger and stronger up to around 4000rpm, post which it tapers off rather sharply. There's no sense of emergency or an explosive power rush that one gets with the Octavia 1.8 TSi, just an engine chugging along in a mature, orderly fashion. 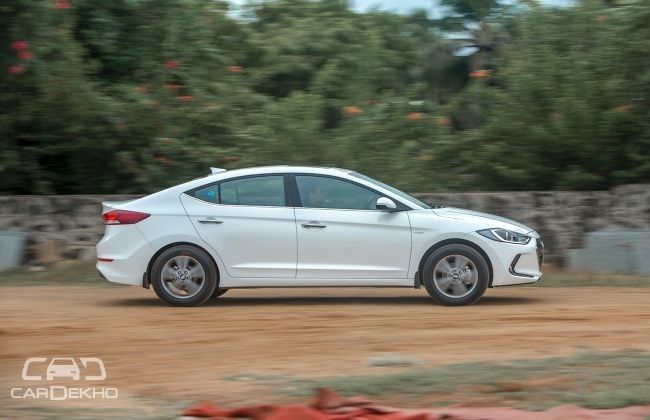 The petrol Elantra gets absolutely no insulation under the bonnet. Despite that, there's practically no engine noise that filters into the cabin. Hyundai themselves credit the new platform for this and the fact that they have used adhesives up to forty times as much to seal off panels, reducing noise. There's barely a tell-tale sign that the engine is indeed switched on, unless of course you glance at the tachometer. 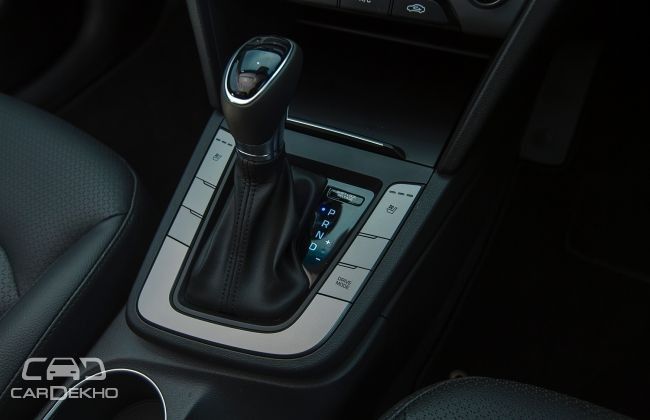 Keep the motor on the boil, and you can have a bit of fun with it. I like how the engine sounds at higher revs. Not trashy, not strained - a clean and crisp engine note. But it isn't one of those cars that eggs you on to keep pushing it harder and harder. And, while it is genuinely capable of holding on to triple digit speeds all day long, you feel it will be happier cruising calmly instead. The 6-speed automatic gearbox complements the engine really well. The ratios are well-spaced out, and while shift shocks are non-existent, lag between the cog swap is minimal too. We do miss a set of paddle shifters, though. Shift the gearbox to manual and it will hold on to the revs for as long as you like. However, try and upshift too early or force a downshift at high revs and it will override your input. 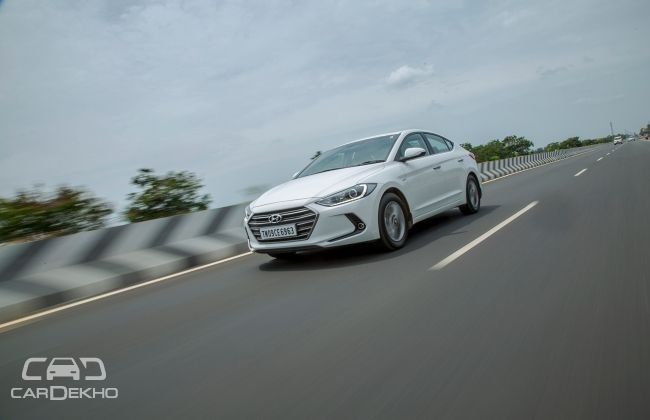 The diesel motor is carried over as is from the older generation and it produces exactly the same amount of power and torque. The manual variant has been tuned to return 22.57kmpl, but, other than that everything is pretty much the same in terms of how it responds and drives. There's no push in the seat torque here, but at the same time it doesn't feel too underpowered either. Both engines get 'Eco' and 'Sport' mode, that alter throttle response and nothing else. 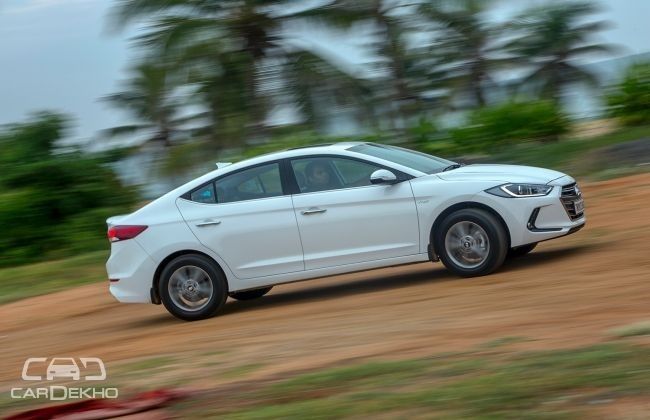 I will go out on a limb and say that the Elantra is possibly the best riding Hyundai sedan till date. The low-speed ride quality is nothing short of fantastic as the saloon goes about gobbling up potholes. Even at triple digit speeds, it doesn't bob about and though there's still a bit of rebound from the suspension when you go over expansion joints, it settles down really quickly. The steering, as expected is super light at low speeds that makes it easy to park and easy to manoeuvre in tight spots. At high speeds, it weighs up enough to give you the confidence you need. It isn't as rock hard as its European counterparts, but it comes very very close, which is high praise. 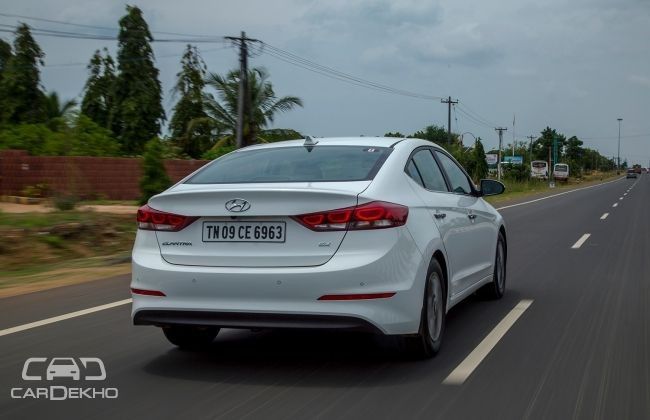 I'm not too happy with the braking, since the pedal seems to feel a tad spongy. It keeps you guessing whether you should go harder on the brake pedal or not. On every other front, the Elantra does not disappoint. It also gets six airbags, anti-lock brakes, traction control and even something that Hyundai calls 'Vehicle Stability Management'. 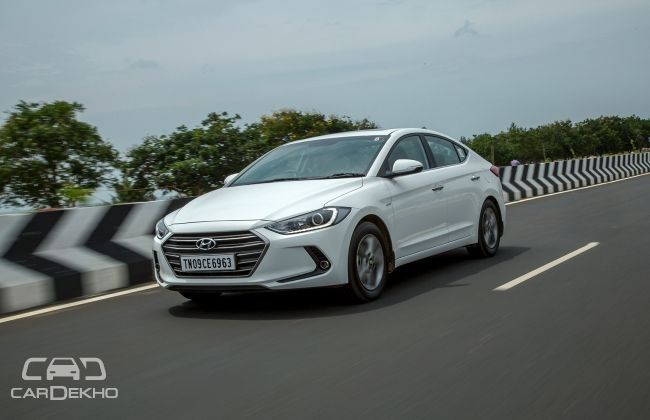 The Elantra is priced between Rs 12.99 lakh and Rs 19.19 lakh, (ex-showroom, Delhi), which means that the base-spec costs Rs 80,000 less compared to the Corolla Altis and a full Rs 2.59 lakh less compared to the Octavia. Consider the top-spec diesels, and the Hyundai is dearer by Rs 53,000 compared to the Toyota, but is priced a whopping Rs 3.22 lakh less compared to the Skoda. For that price, it seems like a well rounded package to us, especially if you plan on being chauffer driven. It looks good, has the required bells and whistles, and now boasts of a better motor as well. What's not so good, is that the features you really want, are more or less reserved for the top-spec variant. The Elantra has never been the enthusiasts choice ever, and it doesn't pose as one either. This one is more than happy ferrying around a well-dressed, salt and pepper haired gentleman to his big office and then to the golf course.