Almost every major manufacturer in the world has an offering in the adventure touring segment, the once niche market that has seen unprecedented growth over the past few years 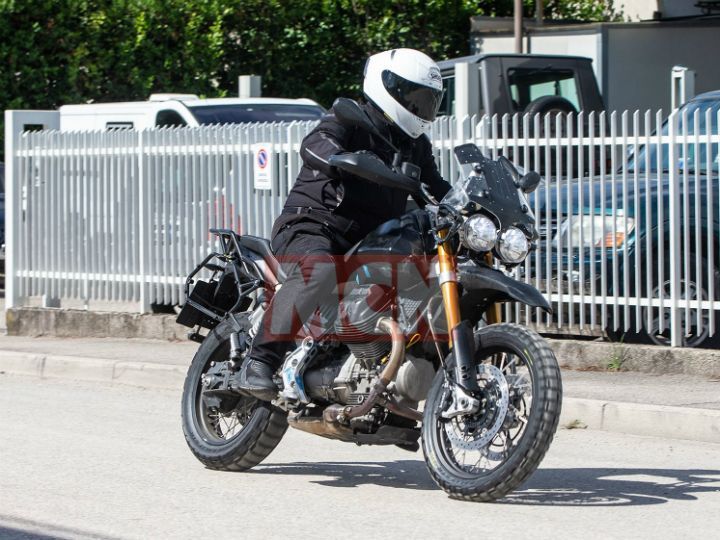 Not many people are aware of the fact that Moto Guzzi had an adventure tourer in its lineup back in 2012. The now-discontinued bike known as the Moto Guzzi Stelvio 1200 NTX (named after the Stelvio Pass in Italy) was pegged against Yamaha's Super Ténéré and BMW’s then R 1200 GS. It managed to draw a pretty good cult following. Unfortunately, parent company Piaggio decided to pull the plug on the bike owing to Euro IV emissions norms. And that's all she wrote - until 2017, when the firm showcased its V85, a concept adventure tourer that looks promising for the company’s future.

It’s been about a year since then, and Moto Guzzi has already managed to get the bike up and testing. Hell, it’s almost production-ready, at least from the looks of it. The recent spy shots suggest that the bike is quite close to the concept revealed at EICMA, with its rally raid fuel tank, twin headlights (not conjoined anymore) and the typical off-road-biased raised beak.

However, the test mule in all black misses out on the classic enduro paint scheme, for obvious reasons. On closer inspection of the picture, you will notice that the windscreen mount appears to be different from the concept. Plus, the windscreen itself is smaller and wider. In the final analysis, the test bike also seems to carry the same full digital TFT screen seen on the concept.

Moving onto the mechanicals, the V48’s 850cc, transverse twin-engine also remains the same. The mill is said to produce a respectable 78PS of power, transferred to the rear wheel via shaft drive. The boxer engine, which also acts as a stressed member, sits in between a steel tubular frame which works in tandem with an asymmetrical shaft swingarm and a side-mounted rear monoshock. The monoshock placement is such that it allows for easy access and adjustment of the spring while creating space for the exhaust system.

While the test mule wore a dull black colour, the concept, which is inspired by Moto Guzzi’s African rally-raid bike, sports a striking red frame with the ‘Classic Enduro’ white and yellow flavour. We expect the production version to be offered the same assortment of colours. According to the company the bike is supposed to come fully equipped with features and electronics seen on modern-day bikes. While this may be the first few pictures we got our hands on, we’re sure to see some more teasers of the upcoming bike in the near future. So stay tuned for more.