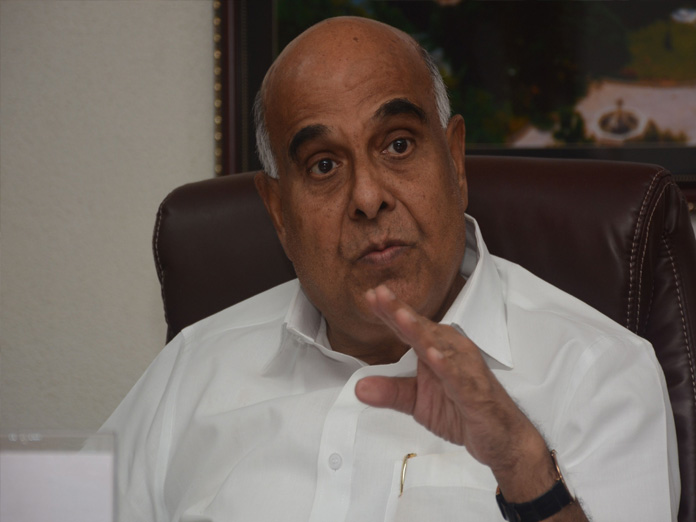 The power sector which was just few hundreds of crores 50 years ago has now transformed into Rs 32,000 crore sector. The Telangana capital, Hyderabad, which was the first city to be electrified among all the other cities in the country before the Independence with the help of few diesel generators now have the Metro Rail network with being run with electric power.

Power department which was always under criticism for power cuts low voltage and tariff hikes few years ago is now looking for a robust future. The department which has acquired all the latest technology is now all set to serve the electrical vehicles era. The man behind this phenomenal success is Devulapalli Prabhakar Rao, Chairman and Managing Director of Telangana Transco and Genco.

The official who was associated with the power department for decades has completed 50 years in service on Sunday. A humble and hard-working person, he takes pride in living up to the expectations of the people and Chief Minister K Chandrasekhara Rao. Rao in an exclusive interview to The Hans India walks down the memory lane.

How was the growth of power sector in the combined state and in Telangana in the past 50 years?
I joined the department in 1969 as accounts officer. In those days, the State was electrified only 10 per cent. Only Hyderabad city, then very small in size, was fully electrified.

It was the only city which got electricity supply before the Independence, in 1910. The Nizams have established two power generation stations in Hyderabad, one at Hussainsagar with 15 MW and the other at Erragadda with 5 MW capacity. They were diesel generation stations.

In 1969, the power generation capacity of Andhra Pradesh was just 500 MW. At Kothagudem, there was a 240 MW thermal power plant, 30 MW plant at Nellore and a 200 MW plant at Ramagundam.

Another mile stone achieved by Telangana power sector was round the clock power supply to the agriculture sector. It was the most happiest time of my life. The 24 hours power supply to agri sector began on January 1, 2018. As many as 23 lakh power pump sets are supplied power.

What are the future plans of the TS Genco?
The Genco is aiming to take the installed capacity to 28,000 MW in the next few years. The Chief Minister wants that Telangana should not depend on other states for power supply.

The construction of 4000 MW Ultra Mega Power Plant at Damaracharla is continuing at fast pace. It is the first time in the country that such a big plant is being established.

The works of 1,080 MW Bhadradri Power Plant are also going on at fast pace. It would come to production by end of this year.

Substations, transformers and new lines erection has been taken up with a cost of Rs 20,318 crore. The State has recorded a power consumption of 13.6 per cent growth. The per capita consumption is 1000 units with annual growth of 11.34 per cent.

What is the progress in renewable energy production?
When the State was formed, the solar power generation capacity was just 74 MW. Till now, the Telangana has added 3,416 MW of solar energy. In the next two years, we have been planning to add 5,000 MW. The Transco and Genco are gearing up to meet the demand to be generated by Lift Irrigation Schemes. New power lines have been constructed between the north and south India with the initiative of Telangana. A 4,500 MW Vardha-Dichpalli line with 765 KV circuit was constructed for 580 KMs.

What are the future plans of the power utilities?
We have been planning to meet the demand of power for the lift irrigation schemes. The biggest LIS, Kaleshwaram Project is before us. It is a challenge for us and we are confident of meeting it. The LIS schemes would reduce the power demand from the agriculture sector.

The electric vehicles era is going to come up. Now we have been supplying power at the cost of Rs 6 per unit for the electricity vehicles A new revolution in the power sector is storage system. The development of lithium batteries to store energy would improve chances of storage of power.

Have the power companies received any awards?
We have been awarded the Economic Times Award-2018. We won award from CIBP for great role in the power sector. Skotch award was given in 2018. Telangana government has given us Best Management Award. We have also won several other awards.