Action all the way 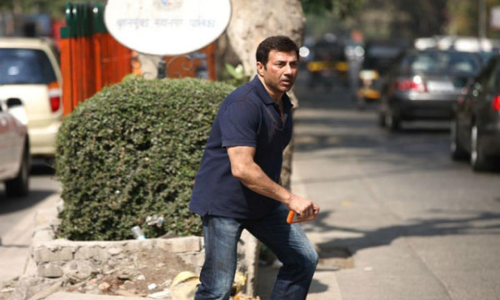 For the first half an hour, the 126-minute ‘Ghayal Once Again’ leaves the viewer flummoxed as a series of unconnected scenes and characters come alive. One can only guess hazily about what is the story telling that Sunny Deol wants to come up with, which actually warms up only at its own pace.

For the first half an hour, the 126-minute ‘Ghayal Once Again’ leaves the viewer flummoxed as a series of unconnected scenes and characters come alive. One can only guess hazily about what is the story telling that Sunny Deol wants to come up with, which actually warms up only at its own pace. By then, he is introduced as the man who cannot be touched for his aggressive, truth-seeking behaviour, his role in the original morphed as a fearless newspaper Editor, with a band of supporters, in the second.

A super package of sentiment, raw action and mardon wali baat kind of a romance, the beefy hunk had carried the 1990 film effortlessly then. Though a little late, the 58-year-old Deol has now returned 25 years later with its sequel, a venture self-produced and directed.

Coming to this 2016 version, as if from nowhere, the initial confusions clear and the viewers are privy to a non-stop, slickly edited fare for the next 90 minutes. An accidental video coverage by a bunch of nature- loving boys and girls, who are out on a trek, captures some incriminating scenes committed by a business magnate’s scion. The excited collegians approach the family elders and through one of the youth’s father, a leading lawyer, the evidence is turned in to the villains.

From here on, as one of the young group members reveals that she has a copy of the footage, action begins on what is by then considered a closed chapter by the rest of the wellwishers. A desperate SOS to Deol to save them as they are hunted down by the vengeful businessman’s security team, brings him into the scene, from where he takes over till sanity returns at the end.

Action being his forte, Sunny, though slow on the uptake compared to his earlier films, packs a solid punch as he drives his car through crazy traffic and cement walls, knocks the life out of a firangi security expert jumping from one moving train to another and gives the audience quite a few moments of thrills. This alone is the highpoint of the film, which gets bogged down in family sentiment and moral hectoring for a while, as it races towards the climax.

Unabashedly physical and aggressive in most of the roles the father-son duo of Dharmendra and Sunny Deol has played; it is just a natural thing for them to showcase what they are good at in this film too. With no songs to interfere in the running time and the hero devoid of any love interest or romantic flashback, the action genre to which this film belongs, stands out clearly.

These days, it is a done thing for the corporatised cinema industry to plan its film release schedule and book festival and long holiday weekends much in advance for a good box-office draw. ‘Ghayal’, released in June 1990 just did not seem to bother. Pitting his home production against the then hot and happening Aamir Khan- Madhuri Dixit’s ‘Dil’, released alongside, Sunny Deol had come up with a roaring hit. The 21st century version too qualifies in the box-office race, just for its earnestness and no-nonsense storytelling.