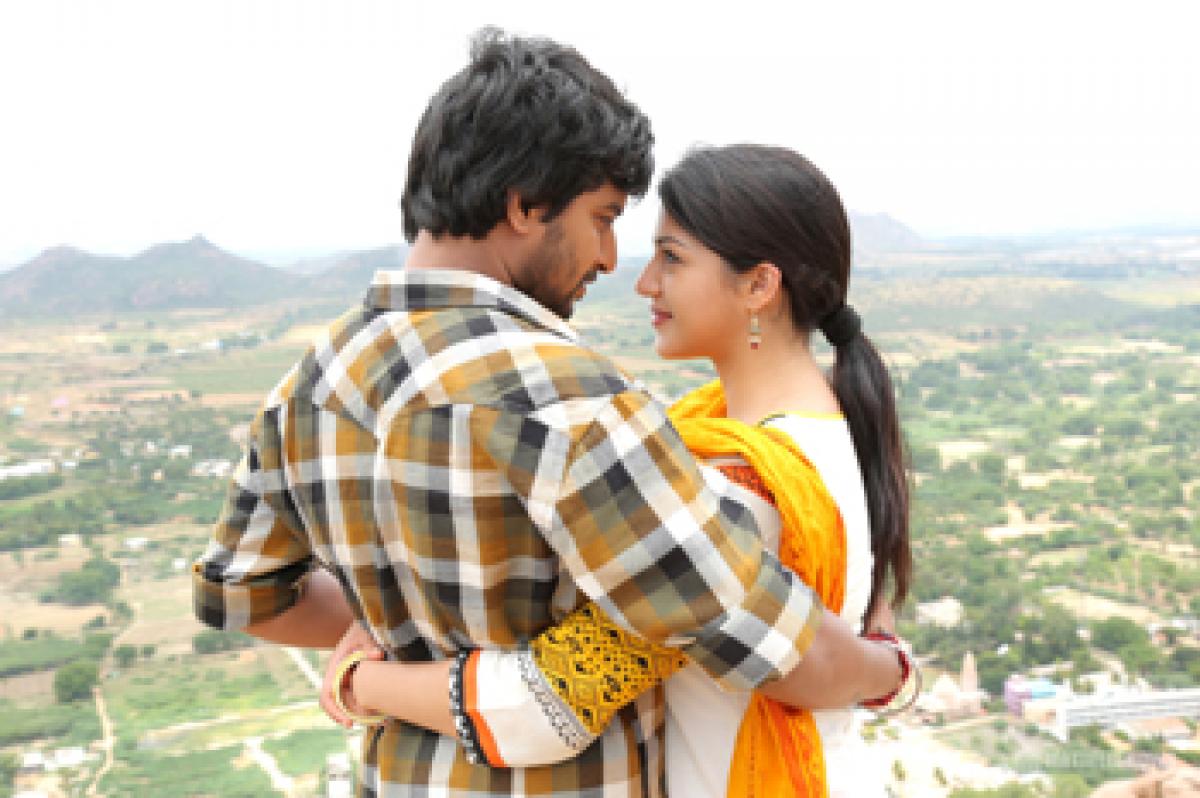 Among the action-crazy Telugu film heroes, how does one show a violence-shunning fellow, who does every other thing a macho character is supposed to, but fights shy of picking up a weapon? One way is to make him come alive when his favourite hero’s name is recounted, either rightly or wrongly by the people around him.

Among the action-crazy Telugu film heroes, how does one show a violence-shunning fellow, who does every other thing a macho character is supposed to, but fights shy of picking up a weapon? One way is to make him come alive when his favourite hero’s name is recounted, either rightly or wrongly by the people around him.

The second is to throw a challenge and promise him the girl whom he dotes on, only if he successfully completes the mission that is identified for him, terribly risky as it looks. The cause and effect of such actions is what this two-and-a-half hour (film) is all about.

Hanu Raghavapudi, a young director into his second film, packs a series of situational twists and knots to weave a pacy first half of his film ‘Krishnagaadi Veeraprema Gaadha’ on the above lines. Surprising though Nani, the hero of the film, who is more like the boy-next-door with a surging star value, had to latch on to Balayya’s whopping popularity to fast track his film among the ageing star’s fans.

Horrific violence, the stereotyped identity of the faction fracas enveloping Rayalaseema gets more graphic in this film too, with stunt masters inventing newer techniques of spilling blood and unleashing violence. It surely is a never-ending reservoir of fun for the onscreen fighters who get shot, stoned and slashed at will.

In this background, the hero has a bunch of precocious, urban kids whom he has to safely ferry to Hyderabad, far away from the blood-thirsty bad elements. The story alternates at two levels, the hit and misses and twists between the two contributing to the action unfolding on screen.

There are aggressive cops to counter balance the violent country cousins, a don by name David Ibrahim who lands to create his own brand of tension and among all this is the hero’s sojourn to the safe zone, a few hundred kms away.

If the first hour and more promises a rollicking fare to follow, it only just about touches that desired level, as the end titles roll on. A truly stand out performance from Nani for sure, who plays to his strength and exudes a natural feel to his character on screen.

However, like the modern commercial Telugu film directors, Hanu too uses the presence of the model-turned-heroine Mehreen Kaur only as eye candy, not allowing her character any scope to carve out a niche in the totally masculine world that she inhabits.

Like an energetic bike rider on his first date, the director overdoes the twists in the final 45 minutes of the film, some of them clearly inexplicable (why did he need a CG-created tiger to roar in the jungle, as gunfire shatters the air?).

The comedy scenes are well done, Prudhvi rocking in his role as a cop who just does what he is good at--intimidating the prisoners in his lock-up, even if one of them happens to be a dreaded don, whom he fails to recognise!

With such dampeners, the rude insertion of songs to break the serious action sequences, this love saga of Krishna peters out into a routine tale. Nonetheless it’s entertaining and that’s what counts in Tollywood, right?