A tale of urban crime 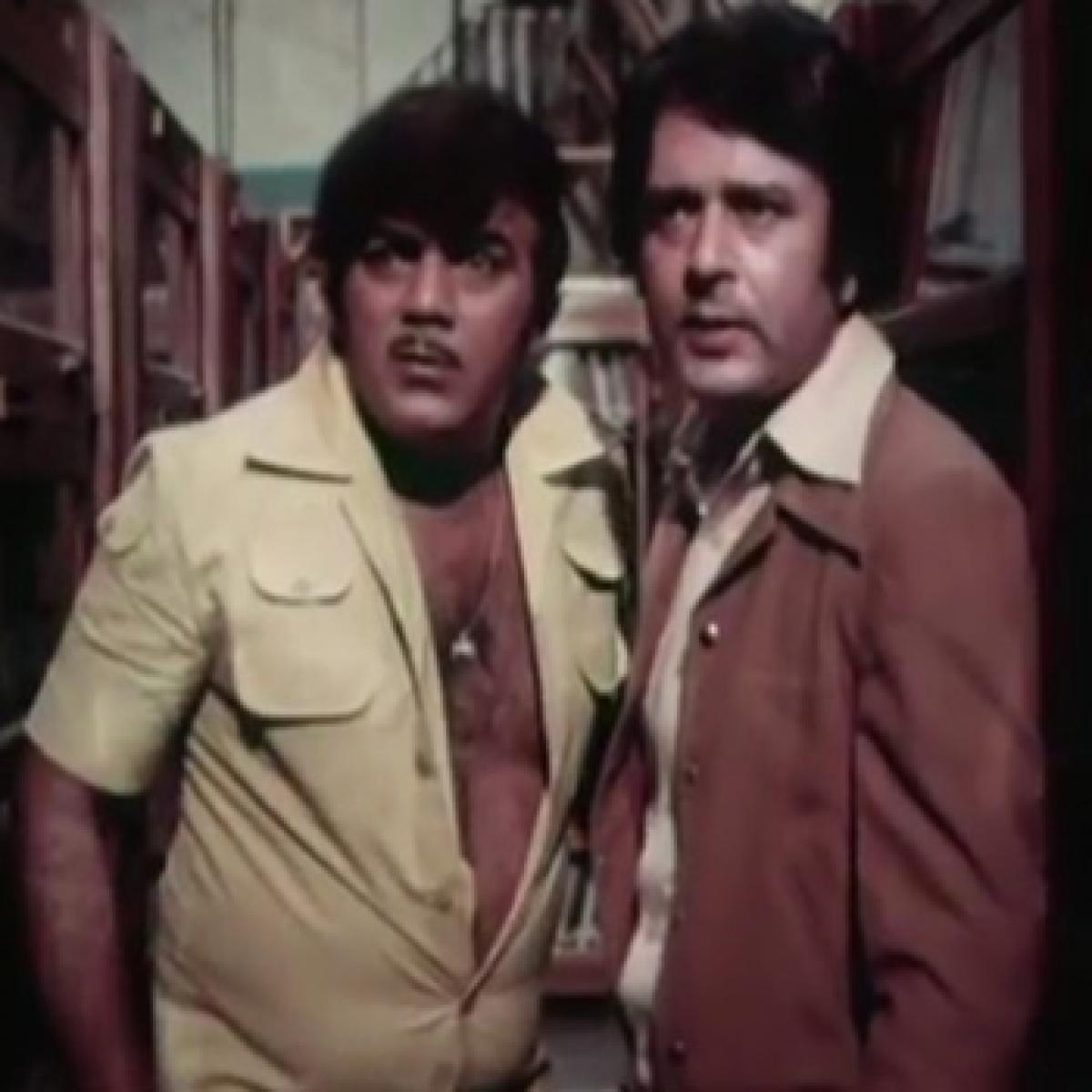 While cops and robbers both have been the mainstay of numerous popular Hindi films, a sustained view into their worlds that would form a better part of a film’s narrative has been rare. The detective genre has regularly seen mainstream interest every now and then right from the 1950s with ‘Apradhi Kaun?’(1957) and then films like ‘Gumnaan’ (1966),

While cops and robbers both have been the mainstay of numerous popular Hindi films, a sustained view into their worlds that would form a better part of a film’s narrative has been rare. The detective genre has regularly seen mainstream interest every now and then right from the 1950s with ‘Apradhi Kaun?’(1957) and then films like ‘Gumnaan’ (1966), ‘Intaqam’ (1969) and in the recent past ‘Manorama Six Feet Under’ (2007) and ‘Detective Byomkesh Bakshy!’ (2015) but procedural dramas have never really enjoyed the sub-genre like status in the manner like in Hollywood or European cinema.

One can argue that ‘Ab Tak Chappan’ comes close to being one of the best procedural films made in mainstream Hindi cinema but it still remains more invested in the soul of the lead character as opposed to the procedural talents that he possesses. But, while police and law dramas still have some degree of procedure thrown in for good measure, crime rarely gets any attention beyond the perfunctory and it’s in this light that discovering ‘Aafat’ (1977), a barely recalled 1970s’ urban crime thriller, becomes a thing of joy.

Watching the opening credits of ‘Aafat’ (1977) where the first shot shows a knife cutting the belly of a dead fish to retrieve stolen diamonds and follows the intricate fashion in which smugglers peddle the stash with a police informant Jagpal (Mac Mohan) on the trail shows how this little known urban crime thriller is clear in its intent to do something different. The plot of ‘Aafat’ isn’t important and beyond a point even the story isn’t but it’s the narrative with a few inspired set pieces and the array of characters, which on the face seem typical of both the genre as well as the era in which the film was made, that make this almost forgotten film worth investing in.

Following the growing smuggling and drug-related crimes in Bombay, Din Dayal (Nazir Husain), an influential and respected businessman, uses his sway in Delhi to get a special CBI officer Inspector Amar (Navin Nischol) on the case. Din Dayal’s nephew, the sole heir to the family’s fortunes has become an addict and he personally requests Amar to nab those who are hell bent on ruining the young of this country.

Amar gets the lead of a newspaper’s editor Balraj (Sajjan) from Jagpal but before he can tell more an assassin hired by the secret gang, Shera (Amjad Khan) kills him. Amar lands up at the newspaper and meets Mahesh (Mehmood), the paper’s crime reporter and his childhood friend. Although Balraj is keen to share the details of the gang’s modus operandi but backs out the moment he gets a threatening call from Jenny (Faryal), the gang’s resident moll.

Amar decides to come back later in the night to investigate Balraj’s office but finds him dead and bumps into a mysterious woman (Leena Chandavarkar), who overpowers him and runs off with the evidence that Amar was looking for. Later, Amar finds out that the mystery woman is, in fact, a cop, Inspector Chhaya and she is also investigating the same gang. Parallelly Mahesh and Amar track Rajni (Jayshree T), the courier for the gang, who is given drugs in exchange for her work and also turns out to be Chhaya’s younger sister.

Amar doubts the commissioner Hardayal (Kamal Kapoor) to be in cahoots with Jenny, Shera, and the ilk and along with Mahesh and Chhaya inches closer to unraveling the mystery. Things promise to fall into place when Amar finally meets Champa (Prema Narayan), a street dancer employed by the gang of smugglers, and she gives him vital information about a consignment due in few days. But seeing a hung over Champa leave Amar’s hotel room in the wee hours of the morning, Chhaya imagines the worst and decides to go her separate way to solve the case. After numerous crests and troughs, the mystery gets solved, as does the confusion between Chhaya and Amar.

The meandering screenplay that fails to seamlessly string the narrative together and a few things being stilted to the extent of hilarity notwithstanding, ‘Aafat’ is thoroughly enjoyable. The ease with which Navin Nischol embraces the proceedings and his general effervescence is a treat to watch, as are most of the scenes featuring Mehmood and some of the set pieces such as the one where Amar and Chhaya are trapped in a burning library.

The dialogues are campy especially gems from Amjad Khan such as – “Meri maut khanjar ki shakl mein mere panje mein qaid rehti hai.” (My death? My death is imprisoned within the knife I wield in my hand) and “Meri awaaz ka gramophone record banalo aur jukebox mein lagakar sunte rehna.” (Make a gramophone record of my confession that you have recorded and play it in a jukebox) and the one-liners that Mehmood throws across the film. The only weak link of the film is Leena Chandavarkar and more so the abject lack of chemistry between her and Navin Nishcol.

In the scenes with even the slightest hint of sexual tension Chandavarkar shifts gears to become cold, distant and Nischol then interprets the scene from a comic point of view – he even lovingly, as if it were possible today, refers to Chandavarkar’s full figure in bovine terms. The near sibling or buddy aspect of the leads is hardly an issue thanks to Nischol and Mehmood’s camaraderie, Jayshree T and Mehmood’s scenes and the crackling intensity between Prema Narayan and Nischol in a handful of scenes even makes you wonder if the film needed a traditional female lead.

At a basic level ‘Aafat’ might appear escapist and even stupid but scratch a little and you’d notice how it’s actually about the various roles emancipated women chose to play. Usually, in popular Hindi cinema whenever narrative strives to depict any kind of liberated female characters it willy-nilly resorts to typical symbolism to convey the point and even throws in a couple of dialogues such as “look how far you/us women have come” but ‘Aafat’ simply does away with any such imagery.

The four primary women characters – Chhaya, Rajni, Champa, and Jenny – are shown doing things that one would ideally associate with independent, free-thinking 1970s’ women but neither do they make a fuss about it nor the men patronise them. Take for instance Chaaya’s run-ins with Amar. In every single pow-wow even though Amar disagrees with her he never doubts her professional skills as a policewomen or Jenny’s decision to seek a partnership with Shera once she realizes that hat it’s the likes of her who actually do all the dirty work for the faceless boss, or Mahesh’s decision to enlist Rajni and her pals from the Judo club to take on the gang of smugglers for the simple reason that they would be more proficient.

Even when Champa, the so imagined standardised amoral street dancer, confesses that she couldn’t care less for the memory of a dead Jagpal, who loved her, she isn’t judged or sermonised either by Amar or even the narrative. Directed by Atma Ram, who, unfortunately, is relegated, to be known as Guru Dutt’s younger brother, the film’s wafer-thin veneer of modernity is just perfect and Ram’s credentials as a documentary as well as ad filmmaker seem to come in handy.

‘Aafat’ might pale in comparison to ‘Shikar’ (1969), Atma’s Ram’s most recognised work, which incidentally was a well-crafted procedural drama, but along with ‘Aarop’ (1974), a drama about corruption in journalism deserves to be unearthed.