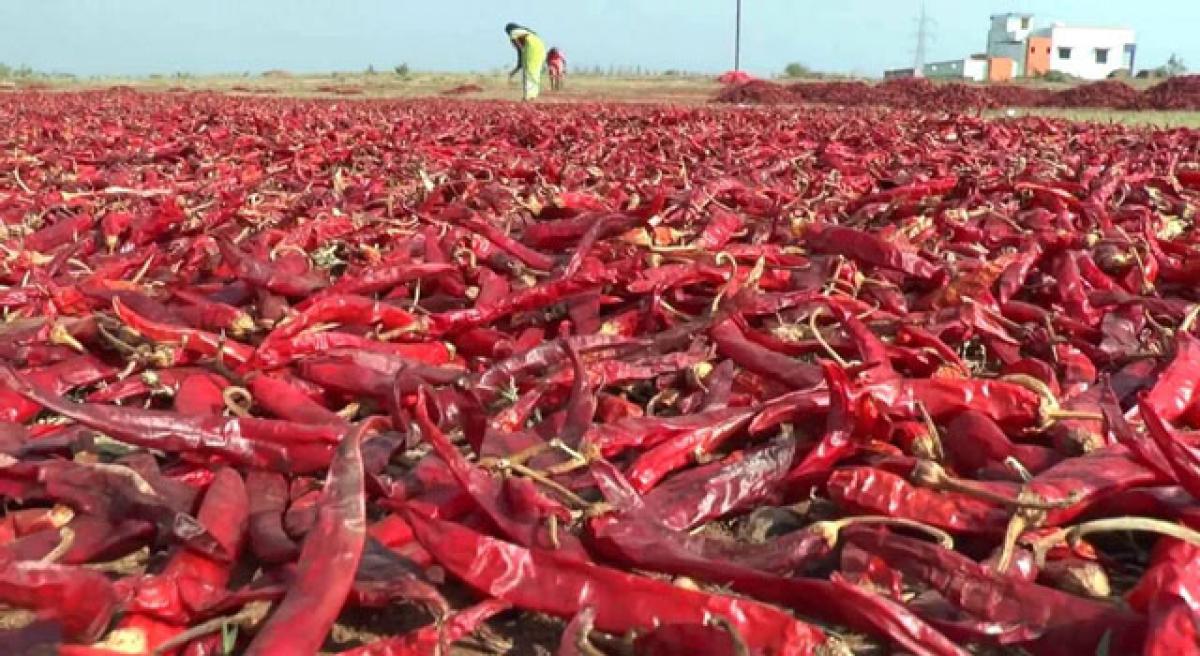 With dry red Chilli exports from India consistently heading northwards, the imbroglio created over its’ pricing in both Telangana and Andhra Pradesh points to questionable practices perpetrated by the traders in connivance.

With dry red Chilli exports from India consistently heading northwards, the imbroglio created over its’ pricing in both Telangana and Andhra Pradesh points to questionable practices perpetrated by the traders in connivance. Concerted efforts by both the government and the market forces to attribute the plummeting prices to demand not matching supply and overproduction should be subject to substantive scrutiny, since these claims are being bandied about without any valid basis.

That the bleak picture has been fabricated to enable the traders to fleece the farmers becomes obvious from the demand for the Indian dry red chillies in the global markets. This does not mean to devalue the domestic market which in itself provides an almost inexhaustible demand. India is one of the biggest exporters of the red hot sizzlers in the world with the Guntur varieties carving out a big chunk in the global markets.

Exports value February 2017 at around Rs. 454 crore was up by 36 per cent compared to same month during the previous year at around Rs.294 crore. The growth rates and the uptrend in the global markets very clearly reflect the fact that India is the most sought after countries to source dry chilies.

Viewed from this perspective, there should have been a corresponding increase in market prospects. While the global demand for Indian chillies have been on an upswing, the export returns is reported to be around Rs. 55,000 per ton i.e, 42% on the total investment comprising production and logistics costs.

On the contrary a picture is being painted about red chillies being in the red due to dwindling demand. Are the chilli farmers in distress because of genuine circumstances pushing them into this situation? There are concrete indicators that point to market malpractices and manipulations resorted to by traders who form syndicates to ‘fix’ the contrived prices.

Of course, this practice is as old as the nexus among the politicians, hoarders and black marketers. Considering the fact that dry red chilly is not a perishable and hence can be hoarded and marketed at higher prices by creating artificial scarcity or short supply, the intent and the objective is obvious.

The utter haplessness expressed by the governments, if not feigned, indicates an incapability and lack of vision on their part in extricating the farmers from their misery. One conspicuous failure that is becoming more and more conspicuous on the part of not just the state governments but also the Centre is their reluctance to rein in the mafia of brokers and traders.

Or is it because of the notorious ideas deficiency syndrome afflicting the policy makers that a structured and rational policy related to agriculture production, market access and pricing is yet to materialise? And, the government has to realize that handing out doles and pricing support just at the moment when the farmers are in crisis is not the solution to this problem. It needs to have a long term vision to formulate a feasible and durable policy to prevent such eventualities.