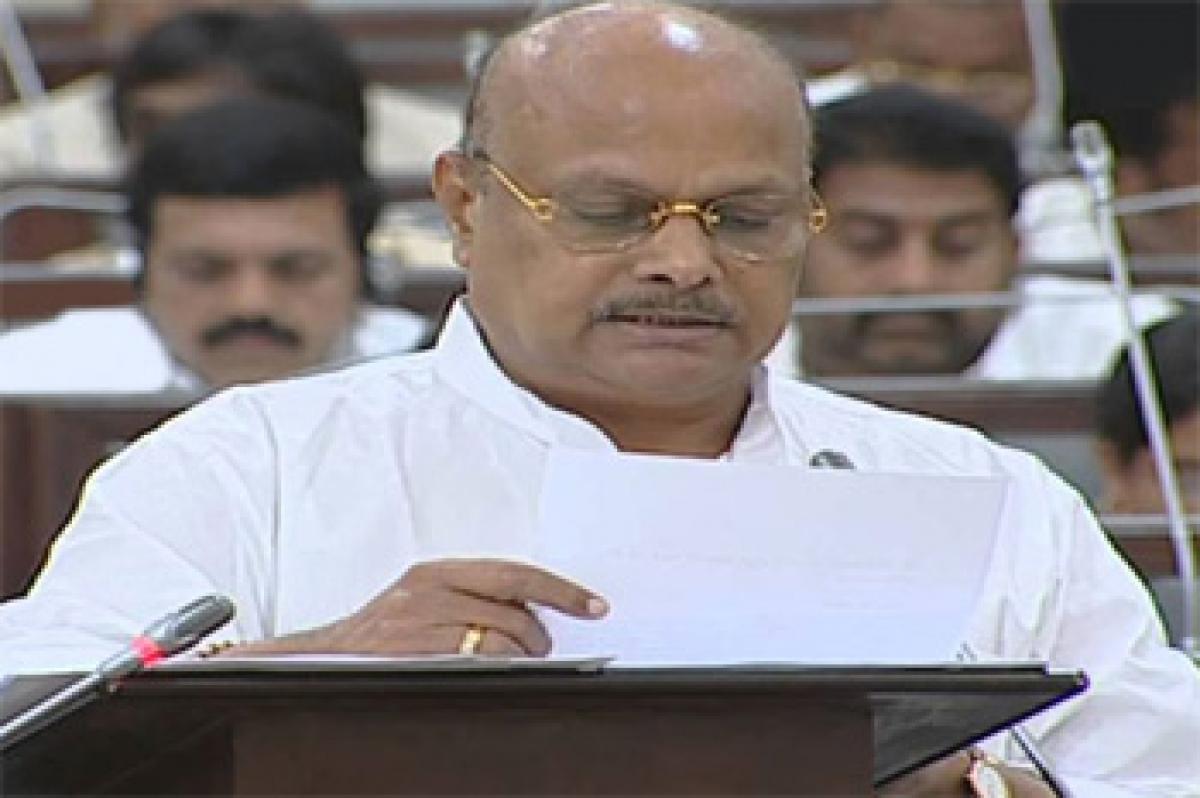 The Andhra Pradesh Finance Minister presented a budget that aspires for a big leap. The budget proposes for a significant fillip to plan expenditure. It is budgeted to increase by 42 per cent. The non-plan expenditure is also estimated to rise by over 10 per cent. But, this big leap is contingent upon central government showing generosity to fund the Andhra Pradesh.

The Andhra Pradesh Finance Minister presented a budget that aspires for a big leap. The budget proposes for a significant fillip to plan expenditure. It is budgeted to increase by 42 per cent. The non-plan expenditure is also estimated to rise by over 10 per cent. But, this big leap is contingent upon central government showing generosity to fund the Andhra Pradesh.

However, the Budget speech itself in subtle but fairly explicit terms expresses its disapproval of the way the Centre is helping the new State. Yet another caveat for realising this big leap would be bridging the burgeoning fiscal deficit of over Rs 20,000 crore. The third caveat to realise the budget outlays is the success of proposed public- private partnership.

The slump in global economy and the falling corporate profitability seriously impair the possibilities for PPP. Interestingly, the Finance Minister states that the budget is presented in an environment of global gloom and national optimism. Even as the size of the budget registers a jump of 20 per cent, key sectors like agriculture, irrigation, rural development, energy and transport received reduced share in total outlay.

The budget speech yet again tries to sell the doomsday sentiment that the bifurcation was nightmarish. But, the data put out in subsequent paragraphs of the budget speech itself belies these claims. The State is on right fiscal path with plan expenditure rising and non-plan expenditure being reined in despite a handsome fitment for government employees.

The tourist arrivals are on significant rise. Though the farm sector is still in distress, the allied sectors, especially fisheries and livestock, registered a massive growth. The food processing is showing promising signs. The State is all set to exploit the advantage of having a 974-km coastline.

The political idiom and the economic picture seem to be not matching, each serving different purposes. The strategy of selling a dream and perpetuating a nightmare is in place again. The Finance Minister in his budget speech itself acknowledges that the government continues to face the daunting challenge of finding the resources required for financing the development needs of the state.

The budget speech makes a remarkable political point which missed the attention of many due to overload of statistics. It says, quoting Shakespeare, “Speak of me as I am. Nothing extenuate.” The impressive performance of State has been contributed not so much by generous support from the Central government. This holds true the first caveat mentioned above.

However, the increase in plan expenditure is a healthy development. The fiscal prudence enhances the sanctity of the budget making. The budget speech exposed the hypocrisy in the political claims that the Centre was forthcoming in helping the State. The Centre has released only meagre funds to bridge the resource gap. The State received only a pittance for the development of backward Rayalaseema and North Coastal Andhra. The Centre’s fiscal help for Amaravati and Polavaram is pathetic. Still, notwithstanding the plain fiscal speak, the political bonhomie blooms.