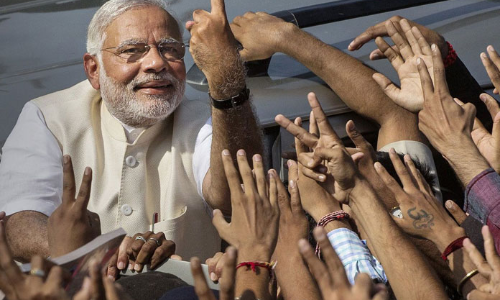 Politics in the country had regressed and has entered a state of very disturbing phenomenon. Sometimes it gives an impression that we are going back to the era of kings and Sultanates where people used to wage wars for political supremacy.The contemporary politics of India seem to be backsliding fast and heading towards a very disturbing situation.

Parties seem to have lost their ideological foundation, as they are only focused on attaining power and not protecting enduring values or their differentiating identity in the political ecosystem.At the national level, the Rafale issue which had taken a backseat following the Pulwama attack has again resurfaced with the government saying that documents linked to Rafale deal have been stolen.

What is interesting here is that the government which maintained silence when the story on the Rafale deal appeared in The Hindu newspaper told the court that there had been breach of Officials’ Secret Act and they had been stolen either by the former or the present employees. When the Chief Justice of India Ranjan Gogoi asked what action the government had taken, all that the government said was that they were investigating how the documents were stolen.

It is really shocking to hear that the government which leaves no stone unturned to keep strict surveillance on political opponents had failed to prevent theft of such important defence documents. How can the government remain silent over such a major issue? Missing of secret defence documents can have tremendous impact on the safety and security of the country and it is not a matter of comedy.

It’s time the ruling party at the Centre stops taking pot shots at others saying that chowkidar had put a check on the corruption of politicians and that is why they are against him and explain to the nation how such misadventures can take place. How can a chowkidar of the people as the Prime Minister claims to be, allow such a theft. Recently we have seen how the terrorists from across the border had created trouble and attacked the CRPF convoy in Pulwama claiming 40 lives.

We have also seen what followed thereafter and how the peace in the country got disturbed. Even now the cross-border firing is continuing almost unabated. Initially, the government tried to hide under the CAG report which ¬endorsed the choice of the Rafale jet on grounds of economy and costs. But the recent media disclosure suggests that there has been 41 percent escalation in the cost of each aircraft.

It also alleged that there has been intrusion from the PMO in the deliberations. Taken aback by this new turn of events, the government it appears is focussing its attention more on the supposed violation of the Officials’ Secrets Act by media as an easy way out. It should remember that even in case of Bofors deal which was then considered to be mother of all scams, the media could lay its hand on certain documents.

With the election notification just a few days away and with the new developments and revelations, the Opposition is getting galvanised to force Anil Ambani and the government to take responsibility for the irregularities surrounding the deal. On the other hand, spokespersons of the government are making every effort to disentangle it from these irregularities. This appears to have embroiled the government further in the controversy. Hence now it is trying to bring Officials’ Secrets Act to the forefront so that the voices can be quietened.

The phenomena of blaming media to cover the failure of governments is not just confined to the Centre, even many State governments are following the same route to gag the media. Not that media is free from pollution but even the few who would like to be independent are also pushed to a corner. In most of the States, the government’s top criteria for release of advertisements is what is the stand of the particular newspaper towards the government.

They have lost their tolerance and do not like any criticism even in analytical articles. The media managers openly state that ‘sorry we can’t give advertisements though it meets all norms laid down by the government just because it takes an independent stand and calls a spade a spade’.
In some States, it has even become a money-spinning activity for some officials who try to strike a deal with newspapers on the percentage it would give to them unofficially for release of advertisements. This leaves one wonder if these were the ache din and corruption-free society the Prime Minister had promised in 2014.

While this is the over all situation, down south, the electoral scenario has touched a new low. It always used to be a fight between political parties based on their ideologies, promises, manifestos and charges of corruption. But never did any government openly call its bete noire a worst Chief Minister and never did they use the government machinery to create problems for other State and never did the police of one State file cases against another State government.

But now the two Telugu States are locked in this kind of a situation. This again is a dangerous and disturbing trend. Both States are now alleging that their data has been stolen. Both the State governments have constituted separate SITs.Another new phenomenon is the misuse of technology to delete the voters who the parties feel are not favourable to them.

It is shocking to see that eight lakh such forms have been filed by political activists forcing the Election Commission to press about 45,000 staff to verify the claims. In fact, deletion of votes can be asked for by filling Form 7. But then the rules say that Form-7 can be filed only by a person whose name is already included in the roll in order to object inclusion of a name proposed to be included in that part of the electoral roll or for seeking deletion of a name already included in that part of the electoral roll.

Form-7 can be filed after draft publication of electoral roll of the constituency to object to the proposed inclusion of an entry in the draft roll. The application is to be filed within the specific days provided for the purpose. Due publicity is given about the above period when the revision programme is announced. Only one copy of the application is to be filed. The application seeking deletion of an entry from the final electoral roll can be filed throughout the year even when the revision programme is not going on. During non-revision period, application must be filed in duplicate.

While the rule says only one application can be filed by one person, thousands of applications have been filed by some political leaders from net centres. The solution for this menace is in the hands of the voters. They should realise that apathy cannot solve problems and not to vote is not rebellion but surrender. Hence proper and judicious exercise of vote is the only weapon to see that the election ground retains its past glory.