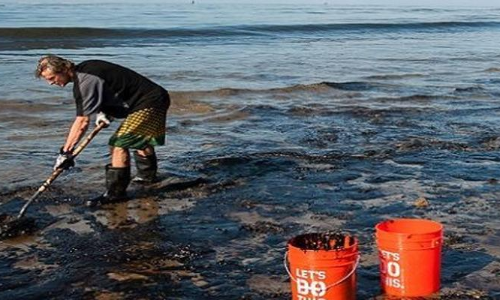 First, some background info on oil and waterThere have been many oil spills over the years, such as the Gulf oil spill in the US that happened in...

First, some background info on oil and water…There have been many oil spills over the years, such as the Gulf oil spill in the U.S. that happened in April 2010, when there was an accident at a drilling rig in the Gulf of Mexico. A spill like this that is close to land causes many problems for the environment and makes it difficult to clean up.

As little as three gallons of oil can spread to make a slick mess covering one acre of the ocean’s surface. With the Gulf oil spill, it’s estimated that 200,000 gallons a day have spilled into the ocean as scientists work to stop the leak and clean up.

Oil spills like this are very damaging, but they aren’t the only source of oil that is polluting our waters. Rain washes particles from air pollution into the ocean. Natural seeps from the ocean bottom also occur every year. And one of the biggest sources of oil polluting the ocean is thought to be from the oil people put down their drains every day, as well as the runoff from parking lots.

So, cleaning up the ocean is an important issue, not just because of recent oil spills.
Oil and water don’t mix — as you might already know. You also know that oil is sticky and greasy. This makes it hard to clean up. Let’s take a look at the chemical properties of oil and water to see why.

What happens when oil and water are put together? The two liquids won’t mix. Oil is non-polar, meaning its molecules are balanced, with equal sharing of electrical particles, rather than one negative and one positive end. No matter how much you stir it, a mix of oil and water won’t come together, because the molecules can’t connect.

Experiment 1 – What happens when oil is added to water?

You know that water and oil don’t mix. Take a look at exactly how they react to each other and find out what happens to create an oil slick.