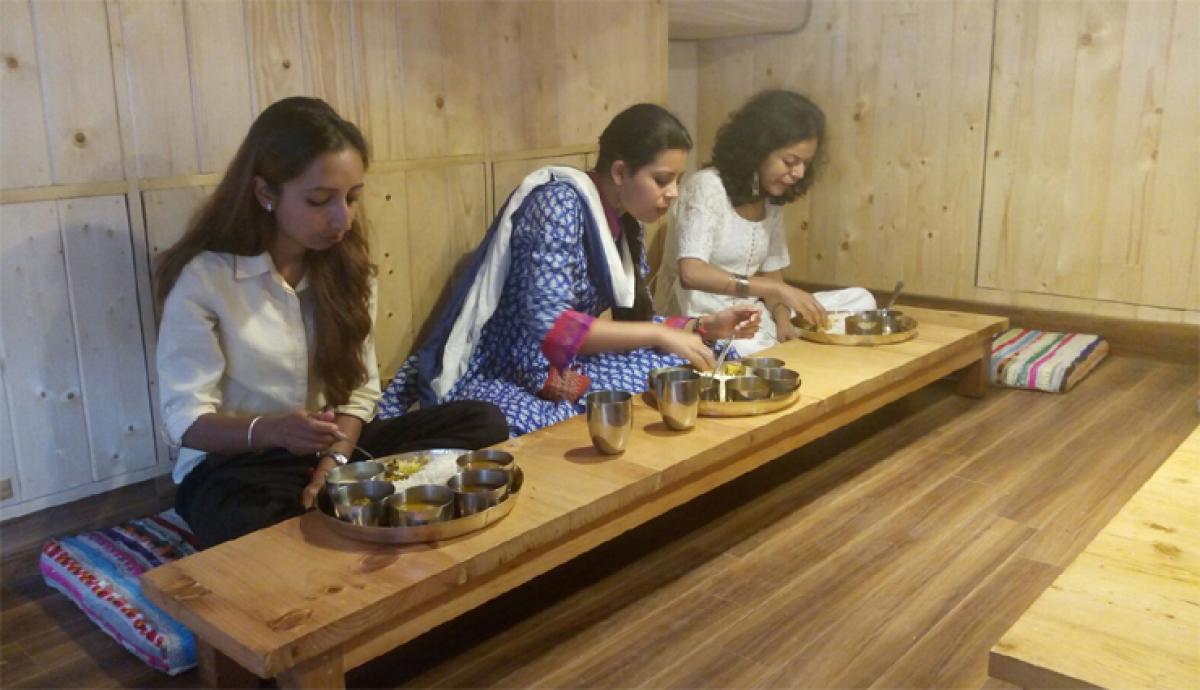 Be it chane ka khatta, kaddu ka khatta or sepu vadi, the authentic Himachali cuisine that has been losing its flavour in the hills has once again...

Be it chane ka khatta, kaddu ka khatta or sepu vadi, the authentic Himachali cuisine that has been losing its flavour in the hills has once again carved a place in the hearts of both the locals and the tourists with its authentic taste.

A young couple this month started a restaurant named Himachali Rasoi in the 'Queen of the Hills', as this town was fondly called by the British, to revive the traditional cuisine and make it popular once again among the middle class and young.
"The secret recipe of any good restaurant is knowing its customers and catering for them," owner Himanshu Sud told IANS.
He said that even the locals were complaining that there was no restaurant in town which offered only Himachali cuisine.
"So we decided to start the restaurant which only offers Himachali vegetarian dishes," Sud said.
The 25-cover restaurant offers lip-smacking and mouth-watering recipes of the Kangra and Mandi regions, popularly known as Kangri and Mandiali dishes.
The computer software graduate Sud and his wife Manisha, who was born and brought up in this town and looks after the restaurant's management, believe that the restaurant would also help preserving the state's traditions, culture and cuisine.
"I have no formal training in cooking, but I learnt the art of making dishes from my parents. My father is a great foodie. I also learnt a lot about cooking from my mother," Sud said.
"I even got the opportunity to learn cooking from the 'botis' (hereditary Brahmin cooks)," he added.
The food varies from region to region in the hill state.
"There is a lot of difference between Kangri and Mandiali dishes. But the common thing between them is the consumption of steamed rice."
The main course of Mandiali dishes comprises rajmah, kale chane ka khatta (sour), maa ki dal cooked in spices and generous amounts of ghee, karahi, sepu wardi, kaddu (red pumpkin) ka mitha (sweet) and a bowl of rice.
The traditional dishes of the Kangra Valley have mandra (spiced vegetable and yoghurt curry), mahni (spicy sweet and sour curry), maah, chana dal (split Bengal gram with fennel seeds), budane ka mitha (sweet), rainthla (date and spinach curry) and rice.
Meethe chawal or sweet-spiced fragrant rice is a common dessert in Kangra.
Himachal Pradesh is known for its dhams or sitting together on ground on special occasions like weddings and festivals and eating without forks or spoons.
The food is served in 'pattals' (broad leaves of a tree); rice first and then a round of other items.
The meal is prepared by the 'botis'.
The food is cooked and served in copper vessels which impart a special local flavour to the dishes. Even the traditional ingredients and species are used, Sud said.
"We are using only desi ghee (clarified butter) for the cooking," he added.
There is one other attraction of the eatery. If you want to enjoy Himachali food by sitting on the ground, the typical way of eating, there is a rooftop with wooden floor.
For this you have to remove your shoes on the ground floor and climb a ladder holding on to a rope.
"The food here is really authentic and gives a taste of typically traditional Kangra cuisine, which was earlier missing in Shimla," local resident Aditi Baniyal said.
FAQs
Where: Himachali Rasoi in Shimla's Middle Bazaar.
A Kangri and Mandiali meal for two would cost around Rs.500 (without alcohol).
Timings: Open for lunch and dinner from 12 noon to 10 p.m.
By Vishal Gulati
(Vishal Gulati can be contacted at vishal.g@ians.in)
Show Full Article
Email ArticlePrint Article
More On
Download The Hans India Android App or iOS App for the Latest update on your phone.
Subscribe
Subscribed Failed...
Subscribed Successfully...