Markets likely to go further down 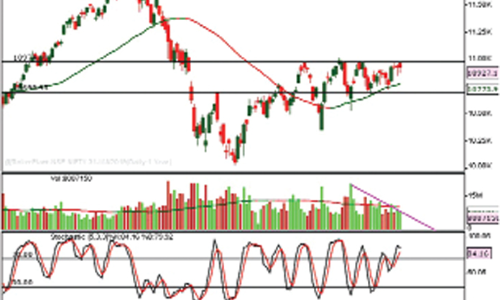 Benchmark indices closed higher last week, with a 05 per cent gain in Sensex and 02 per cent in Nifty But the broader Nifty Midcap index fell 23 per cent and Nifty Smallcap lost about 34 per cent last week Intense selloff was seen on Friday and almost all the sectors were ended in red

Benchmark indices closed higher last week, with a 0.5 per cent gain in Sensex and 0.2 per cent in Nifty. But the broader Nifty Midcap index fell 2.3 per cent and Nifty Smallcap lost about 3.4 per cent last week. Intense sell-off was seen on Friday and almost all the sectors were ended in red.

Nifty IT index is the only outperformer with 1.9 per cent gain. The repo rate cut by RBI after a gap of 18 months failed to enthuse markets. Even after the two major triggers -Interim Budget and RBI policy, the Indian stock market is unable to give a solid breakout from a longer consolidation phase.

The market breadth is very negative, with as many as 240 scrips hitting 52 weeks low and 20 scrips in Nifty losing 5 to 25 per cent in the last 30 days. As of now, 24 Nifty scrips which have 88 per cent of weightage, announced their quarterly earnings, recording just 3.15 per cent growth. With this fundamental factor, the Nifty Price Earnings (PE) as on February 8, stands at 27.10, still near to the historical highs.

In January 2018, when the market peaked, the Nifty PE is around 27.50. The only positive outcome is that FIIs have bought Rs 3,581.12 crore worth of shares in February.

The breakout in Nifty on Wednesday did not sustain the momentum and settled below the breakout level. That’s not a good sign for the market. Despite RBI cutting key rates, major indices closed in negative zone and formed a bearish pattern Gravestone Doji, which is also not a good sign.

Even on a weekly chart also, a Shooting Star, again a bearish sign, was formed. Generally, breakouts from longer period consolidations, will have a faster move and follow through. But this time, the breakout is not having any follow-through action and closed below the breakout day’s low. The Gravestone Doji formed at upper Bollinger Band while the Stochastic oscillator is indicating some more fall.

As per the basic technical analysis rule, any breakout failure leads to a sharper downside move on condition that it should sustain below the failure bar’s low, which means if Nifty moves below the 10,925 level, there are chances that it will retest the previous low which is 10,583. Before that, there are short term supports at 10,864 (20 dma) and 10,820 (50 dma).

Any fall below this level, the downtrend will be confirmed. If the Nifty able to move above 10,985 and sustains for at least for two days, then be positive about the market. Otherwise it’s better to avoid long positions. (The author is a financial journalist and technical analyst. He can be reached at tbchary@gmail.com)